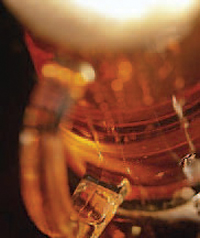 Nothing is better than popping a cold one with friends at a barbecue or after a long day of work. But beer is more than a beverage. It can be used in cooking, marinating meats and even making party dips. Take a few minutes to brush up on your beer knowledge and pick up something new when you are at the grocery or liquor store.

Ale: A brew made with top-fermenting yeast, which gives the beer a distinctive fruitiness. Ale comes in a variety of strengths, including bitter, India pale and Scotch ale.

Barley Wine: A British term for ale that is typically quite strong and contains about 6% to 11% alcohol by volume. It comes in both pale and dark versions.

Berliner Weisse: A German beer made from wheat. The taste is sour, with high carbonation. This beer is usually cloudy.

Black and Tan: A blend of porter or stout and lager and sometimes a blend of ale and stout.

Bock: A strong but smooth malty lager. A small amount of hops is added to balance the malt, not to add flavor. Traditional bocks range from golden brown to dark brown with malty sweetness. Doppelbock, or double bock, is stronger, although not twice as strong, and has more intense malt flavor.

Ice Beer: A conventional beer that has been frozen and often reconstituted.

India Pale Ale: Developed by the English to be a stable enough to ship around the world. The preservative properties came from high levels of hops and alcohol. Pale ale is golden to amber in color.

Lager: Fermented with yeast that works best at cool temperatures. The beer is then laid down in tanks for cool maturation at close to 32 degrees Fahrenheit. The period of storage runs from one to three months; once it is filtered and bottled, it is best drunk soon because it can deteriorate quickly. Most beers are lagers.

Light Beer: Lower in calories than other varieties of beer. However, some brewers reduce calories by watering down the beer. It is thoroughly fermented, with little sugar remaining unfermented. Total calories for 12 ounces usually range from 90 to 140.

Malt liquor: A stronger version of lager. Most beer drinkers disparage the flavor of malt liquor.

Pale Ale: An ale that is lighter in shade than the dark brown version; bitter in taste.

Pilsner: A traditional lager, golden in color but drier and with a stronger hop bouquet.

Porter: A dry, dark ale that is nearly opaque but not too much heavier than a stout.

Wheat or White Beer: A pale brew made from wheat.