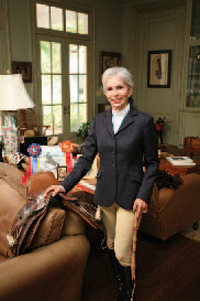 Truth be told, the history behind the house in Old Metairie is as interesting as any one of the many eclectic, beautiful or sentimental objects within. The house was built in 1937 by a prominent New Orleans family. It was copied from a French-style home, located in Beverly Hills, that appeared in a 1935 issue of Architectural Digest, complete with floor plan.

Not only did the owners want the floor plan but every last interior detail: the patterned floors, mantelpieces, oval dining room, hidden linen closet tucked between a dining and breakfast room, the windows, which run across what is now called the family room. With the exception of the roof (the California one was made of tile, the New Orleans one of slate), the two were identical.

The house was wide but not deep; in fact, the main floor consisted of an entrance hall and main room leading to a garden. Originally, that made for perfect cross-ventilation, so desirable in New Orleans in an era of screen porches, verandas and ceiling fans. By the time the present owner purchased it, in 1982, it was ready for major upgrades, not the least of which was installing a central heat and air-conditioning system. Still, what lay beneath were decades-old pipes, plumbing, and wiring.

By 2000, the house needed massive renovation. “Doing the numbers, it was more economical to tear it down and rebuild. But we loved the house, its layout, and its history,” says the current owner. “So we decided to rebuild using the same footprint. We added a little space, making the ceilings 12 feet instead of ten, opening it up just a bit. If you look at the computer model, it’s about 12% larger but exactly in scale.”

The house was in the process of being rebuilt when Katrina struck, but, other than the usual hold-ups of labor and construction, it suffered no damage.

“After the hurricane, I felt it was important to use local labor so people could get back on their feet,” says the co-owner, who oversaw the rebuilding. “Before we began demolition, we photographed everything: The floors, the cabinets, the doors. Then I asked for some things to be changed upstairs, like separate bathrooms and two huge his-and-her closets, because that’s every wife’s dream, isn’t it?” 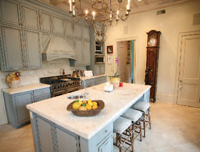 George Hopkins, who must have been delighted to see the original floor plans, was the architect. Master contractors Rene and Louis Chevalier reinstalled and re-created paneling, laid and stained floors and created the walk-in closets. Alex Rico, of Interior Design, worked with furniture placed in storage before the teardown, and freshened fabrics here and there, updated placement and handled all the other details a decorator is entrusted with. She turned to Gretchen Howard for faux-painting treatments in the house, from the deep Venetian-aqua dining room walls to a stenciled frame around a window in a small stairwell. 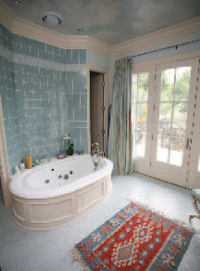 “What’s nice is when we are here, we feel we are back in a place we love,” says this Texas native. “It’s taken a while, and a lot has happened. But inside the house, with the cedar toy chests, the merry-go-round horse, the big, old sofas to just plop down on, and the flowers in bloom in the garden, things just feel the same.”