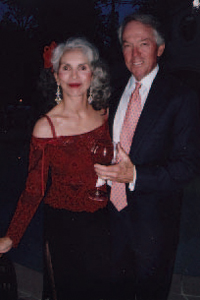 Oh, what an absolutely lovely evening it was … in the most beautiful garden of the Old Metairie mansion of Terry and Henri Hall. Glimpsed milling about were Debbie Byrd and Buddy Butler; Suzy Parker and Phil Mollere; Tiffany Adler; Bryan Musso; Ralph Lupin and Pam Halter; Donna and Russell Klein; Leslie Stokes; Sandra Wilson (with Louis) and Mike Theis (the BRAVO presidents); Janie Kahn; Mario Villa; Michael San Miguel; Cheryl Fritzhhertz; and Dale Rathke, to name a few. Jacquee Carvin and Theresa Guzeta were busy recruiting as chairs of the 2008 event. Smart women!

The setting was the New Orleans Ballet Association’s Moulin Rouge benefactors’ party with red roses everywhere and VaVaVoom playing gypsy jazz and guests gussied up in their summer-garden finest enjoying libations from Republic Beverage of New Orleans and the Goldring Family Foundation. Benedict’s catering was over-the-top (again!) and if you missed the party, be sure to catch up with their repast at the Moulin Rouge Gala at the Republic on June 1. Chairs Shaney Cefalu and Cheryl Mintz promise to greet you at the door in their chichi bustiers and feathers. For tickets, call 522-0996.

Last issue I announced the winners of the Men and Women of Fashion awards and just let me say that their recent annual luncheon was a record-breaking success, with kudos to Martha Canover and Sharron Massey for their efforts. Now it’s time to send those kudos to Gayle Batt, Suzanne Rusovich and Denise Shinn (hubby George owns the Hornets basketball team, you know). They were recently honored at the 12th annual Women of Substance luncheon.

How about chef extraordinaire Donald Link? And the caption read: Herbsaint chef Donald Link scores Best Chef South honor from prestigious James Beard Foundation. His Cochon was also nominated in the Best New Restaurant category. How about those kumquats! Oh yes, and French Quarter chef Scott Boswell of Stella! and Stanley fame has been a frequent visitor to Tokyo consulting on a restaurant there. Hellooooo!

Andreas Preuss and wife Noni were in town recently on their annual trek to the Jazz & Heritage Festival. While in New Orleans, diehard fest fan Andreas, a producer with CNN Atlanta, and his family celebrated birthdays for mom Evelyn and nephew Brandon Preuss. Another birthday party of note was hosted by Constance Charles Willems, honorary consul of the Kingdom of the Netherlands, and husband Casey for H. M. Queen Beatrix. I understand the national anthem of the Netherlands, “Het Wilhelmus,” resounded throughout the Plimsoll Club and was heard in the neighborhood chambers as well! 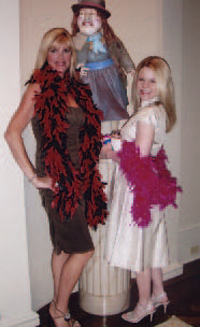 Before bidding you adieu, I send kudos to Jacques Rodrigue (son of artist George) and Cheryl Mintz (daughter of Mitchell and Christie Mintz), who are receiving their law degrees. I want to remind them that The Spa at the Ritz-Carlton has reopened for their massages.

I am off to the Hotel Riu Palace Cabo San Lucas for the wedding of Jeff Bloom (son of Dr. Bob and Rosie Bloom) and Sara Wanande. Is it adiós or adieu?