Ann and David Williams have renovated a string of homes, with the latest project being a stunning St. Charles Avenue condo 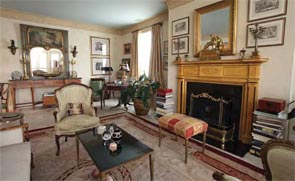 Ann Williams loves to get her hands and head around a project. And some of her favorite projects are restoring and renovating residences. She and husband, retired judge David Williams have moved more than seven times since 1976, redoing homes large and small along the way. Actually, none of the residences have been small by most standards, as they needed room for their four children and a menagerie of pets, which at times included dogs, cats, birds and rabbits.

At present, they are ensconced in a condominium overlooking St. Charles Avenue, two doors down from their former home: the Grima House, built in 1857 for the spinster aunts of the family, whose French Quarter residence (the Hermann-Grima House) is today open to the public. Apparently, the Quarter was a little “raucous” for these genteel ladies while the Garden District suited them perfectly. The house was bought by the Historic New Orleans Collection, along with important papers of Judge Felix Grima from the estate of Clarisse Grima, the last member of the family.

“I know the history of that house not only from renovating it but because I worked at the Historic New Orleans Collection at the time of the purchase,” said Ann, perched on a handsome painted French daybed, which is part of the tasteful mix of furniture, statuary and architectural features, new and old, that make this glass-enclosed aerie a favorite spot for everyone in her family.

But the Grima House was not the Williamses’ first brush with renovating a historic home: In 1976 they purchased 3643 Camp St., known as the Fink Asylum, a home for women and children left homeless by the Yellow Fever epidemic in the city. Collaborating with noted architect Davis Jahncke on the extensive structural work, the two exterior dependent buildings and the interior architectural details, they got the house listed on the National Register of Historic Places in 1978. This was the first of many projects done with Jahncke, including their present-day condo.

“After Camp Street, we bought a house on Falcon Drive and lived in a rental on Mulberry Drive until the renovations were complete. Again we worked with Davis’ firm, adding extensions and additions as our family grew. We also developed property in Old Metairie for resale, demolishing older, smaller houses and building two larger, more updated houses. They were designed by the Jahncke firm, built by me and are both standing today. Sadly, Falcon Drive flooded and had to be completely renovated. In 2002, we began looking for another house to renovate. Our children were heading to college, the dog died and the rabbits were given to our carpenter.
“When 1604 Fourth St., the Grima House, came on the market we jumped at the chance to live there. We reoriented the entrance to St. Charles Avenue, added a masonry wall and a gated driveway for security. The wiring and plumbing was replaced; there was structural work, and we added one small story addition from the main house to a rear service building. I researched, even consulted with [landscape architect] Rene Fransen on the historical correctness of the landscaping. It was a massive garden project. We moved in on Valentine’s Day 2003,” explained Ann, who has been a student of art, design and landscape architecture and a co-owner of Piranesi Antiques, whose prints line the walls of the living room and hallway in the condo.

In 2005, the enormously talented decorator Jon Viccari took an interest in the house; the Williamses were ready for a new project. The couple bought the condo two doors down with no plans to do any major construction on it. But as the family settled into this very “New York Meets New Orleans” condo lifestyle, Ann saw the benefit of creating a master suite from the attic above, which at the time was reachable from a service elevator.
“Since almost everything in the condo had been brought in by cranes through the porch windows, I thought carving out a stairwell should be a snap. Nothing when doing construction is really a ‘snap,’ and if anyone should know that it’s me! To do the staircase required installing beams. The attic was quite raw; there were octagonal windows, so I worked with them, making one the focal point in a marble bath and the other a bright spot in a dressing room. We created a dormer across the front for a sitting area—that too was tricky. But I relish a challenge, a problem, a way to solve special situations,” laughed the lanky brunette who has also worked with a variety of other homeowners solving their problems, overseeing subcontractors and coming up with creative solutions for homes both historic and simply special to the owners.

“I love this porch. It’s a sitting room, a place to watch TV, have a casual supper or pals over for drinks. At Mardi  Gras the kids come home and bring pals. Fortunately, the daybeds and sofas double for extra sleeping!” The statuaries that grace the porch represent the four seasons and are vestiges of her beloved garden two doors away. “I miss my gardens. I love gardening. It’s nurturing, relaxing and a joy. It’s the only part I really miss,” she says somewhat dreamily. “We could happily live here for the rest of our lives, but I do wish I had a garden. And I’m itching for a project, I’m not the type to just sit around and needlepoint.”

Something tells me, there will be another project, another garden, another….