The Saints, and their fans, are ready to do it again 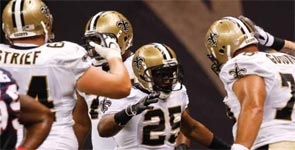 When faced with the reality of his tiny country’s overcoming impossible odds to become the winners of the world’s greatest war ever, Winston Churchill said: “In war, resolution; in defeat, defiance; in victory, magnanimity.” Saints fans emerged from the 2009 season as NFL champions, but in 2010 they will have to learn for the first time how to deal with that fact. How to act like champions? Saints fans have only begun to learn.

By the second week of September, the Saints will have played their first game in the Superdome, versus the Minnesota Vikings and Brett Favre, the same team and the same quarterback they faced in their last game there. The city will have held a Saints parade before its first game just like it did after its last. The soap opera drama called the “Brett Favre Retirement Watch” will have met its nadir and concluded, probably with the man from Kiln playing, though whether the ankle that Bobby McCray crunched is ready to unretire and play at full speed again is another question that will have to be answered on that same Thursday night, September 9.

For the second time in their history, the Saints will open the NFL season, but this time will be the first they have done so at home. An NFL Championship banner will be unfurled and Saints fans will have to wake on the other side of the most glorious kind of unexpected dream, one in which their team is standing at the top of the American sports mountain, looking down, for the first time, at all comers. The waking reality is that every team in the biggest league in America will be aiming to beat the Saints this year, and challenge number one will be the same Minnesota Vikings whom the Saints relegated to the Dome’s waste bin last January, something the Vikings have surely not forgotten.

But things will be different. Instead of being the biggest underdog of all underdogs, the Saints will be the champion. Instead of being a team of no-names they will be recovering from seven months of toasts, accolades, awards, book releases and talk show interviews. Instead of a parade on the way out, they will receive a parade on the way in. Indeed “The Krewe of NFL Kickoff Parade” will lead from Elysian Fields Avenue, aptly named after the paradise where the deceased of battles past rested for all eternity, back to the scene of the battle itself, to be relived once again. When fans finally make their entrée after having second-lined all the way down Poydras Street (again, back the other way from the last time they did it), they will be treated to the first phases of an $85 million redevelopment effort taking place inside and outside the Dome. Ultimately the figure invested will rise to $150 million, and thus it looks as if the fans will be getting their just rewards just as much as any player who has seen his contract upgraded as a result of their championship year. And that’s fitting since the fans helped carry the team forward throughout the season, especially in the Dome, and most especially in that tight final versus the Vikings, when it felt as though every person inside was virtually lifting and pushing the team forward by sheer force of will.

Much of the core team remains intact, but gone are backup quarterback Mark Brunell, backup running back Mike Bell and starting linebacker Scott Fujita, a stalwart leader on and off the field and certainly the team’s greatest loss. Added to the team from the draft are super-speedster and physical cornerback Patrick Robinson, a new backup offensive tackle in Charles Brown and a rangy, athletic future star tight end named Jimmy Graham. The Saints appear to have mined a rich draft and free-agency pool, but for every player plugged in, the team’s coaching staff will have to make a decision on which player to subtract from what was a great Super Bowl squad, and that will not be easy.

What the fans will see this year is a playoff-hardened team with a confidence that the franchise has never had before. They will see another classic matchup with the Vikings under high pressure (though not nearly as intense or important) circumstances, followed by a fairly tough opening schedule. After facing the Vikings at home, the Saints will have to travel to playoff hopeful San Francisco for a night game, and then return for bitter division rivals Atlanta and Carolina, who will be looking to take the division from the Saints inside their own Dome. The Saints will have to face playoff-caliber teams Arizona, Pittsburgh and the Dallas Cowboys—in the Saints first-ever match on Thanksgiving Day. Winning in Dallas on Thanksgiving is always a tough task, but moreover the Cowboys are the team that beat the Saints in the Dome to end their hopes of a perfect season after a 13-0 start. This will be followed by road games against 2009 playoff teams Cincinnati and Baltimore—probably in the cold weather, in their stadiums—and then in Week 15 the Saints may have a season-deciding tilt against the resurgent Atlanta Falcons in Atlanta, on Monday Night Football. Altogether the Saints are looking at five prime time or nationally televised games, three of which will be on the road in hostile environments.

Saints fans should be glad they won; they should enjoy their success and consider their team good enough to win again, but they should also accept that 2010 is a new season, and every other team and their fans will start out believing that this is their year for glory. Saints fans should not expect other fans and other teams to bow down to last year’s winner—instead, they will come looking for their crown and seeking to take it. And when they do they should be reminded of the Saints’ decisive advantage of playing in the Dome, because the Saints and their fans will have to scrap, claw and fight every single game to ensure home field advantage once again. No team wants to tangle with the Saints in New Orleans come playoff time—it is there that the team finds the resolve and the magic, and it is there that so many teams have shrunk before our howling crowds. If Saints fans have grown attached to their Lombardi Trophy, there is no better way to ensure another one.

80
previous Comeback Kid
next In the Balance