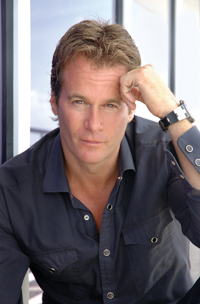 As the founder and owner of the Midnight Oil Company and the Gerber Group, nightlife impresario Rande Gerber has developed some of America’s swankiest clubs and restaurants, including the Whiskey in New York, Stone Rose in Los Angeles, and Cherry in Las Vegas. He’s even expanded into Madrid and Mexico City. In our corner of the world, Whiskey Blue and the Living Room at the W in downtown New Orleans are Gerber creations, as is the brand new Rise Lounge which just opened at the Hard Rock Hotel & Casino Biloxi. Wherever his Midas touch hits, Gerber’s establishments elevate the bar experience to whole new level of sophistication.

What was your initial concept when you first entered the business of high-end lounges and nightclubs?

I wanted to entertain people the way I entertained at home. My friends would come over, and we’d sit on couches, have drinks, and listen to good music. The only thing missing was waitresses! (Laughs). I thought I’d try to create this lounge concept for the public. I found a 1,000 square foot space and designed it with Philippe Starck, who is incredibly talented. I told him I wanted the place to feel like it was my living room. That was the Whiskey in the Paramount Hotel in New York, and people really seemed to like this lounge concept. So a year later I opened another, then another, and now it’s evolved. There’s Whiskey Blue; there’s Stone Rose; there’s Underbar; there’s Wetbar. I have a Mexican restaurant concept called Mex, and Rise Lounge in Biloxi is number twenty-seven for us.

Your nightclubs attract a celebrity clientele, but you’re concerned with giving everyone the same top-notch experience.

Exactly! We do have a lot of celebrity clientele— musicians, actors, politicians—and the reason they like our establishments is because we protect their privacy. We have a strict policy for employees not to ever talk to the press about who was here or what they did. We get calls such as “We heard so-and-so was there doing this last night,” but we never comment on anything. Everyone can feel comfortable. People don’t have to worry about reading about themselves the next day. I appreciate when my privacy is respected, and I want guests to feel the same way. I think it’s important to treat everyone the same because everyone is the same. People just have different jobs with different names.

I understand that you truly run a family business.

I started the company over fifteen years ago. I brought my brother Scott in as a partner about eight years ago, and my younger brother Kenny handles West Coast operations and helps get places open. And my Dad’s involved, too. It’s nice to be able to bring the family into the business; there’s nothing like having family around you. I’ve also got employees that have been with me for fifteen years. The great thing about the company is that we truly are a big family. We have over 1,000 employees. Some have been with us from day one. You see the kids of bar backs grow up, and it’s such a great feeling. We don’t just own a bunch of bars. We have dedicated employees who really love their jobs. They’ve become a big part of my life.

You have plenty local repeat business at your places. That speaks volumes.

That’s true. We hire the right people, and the great thing is that our employees are our customers. You’ll get celebrities and tourists coming in, because they read about it somewhere, and that certainly adds to the mix. But I think it’s all about the locals. Locals shape the personality of the place. Yes, we’re high-profile, but I want our places to feel like your neighborhood bar. The views from Rise Lounge here at the Hard Rock in Biloxi are spectacular for a neighborhood bar!

It’s on the twelfth floor, the penthouse level, and hopefully it’s Biloxi that will rise again, not the waters! One of my employees came up with the name “Rise,” and I really liked it. I make the decisions, but I keep everyone in my company involved. It’s difficult coming up with a name, especially when you have so many places. If an employee comes up with the name for a concept of mine, they get a nice bonus check! (Laughs).

The Hard Rock Casino in Biloxi was supposed to open just days before Katrina unfortunately put herself on the guest list and destroyed the hotel. Why is it important for you to remain committed to the New Orleans and Gulf Coast areas?

Actually, more than anything I wanted to get Rise open. Obviously, Katrina was a disaster for most people in Biloxi and New Orleans, but the one thing that it didn’t take was their soul and their spirit. People are so friendly in the South, and you never hear them complain. I’m from New York and I live in California, and I got off the plane, got in the car, drove to the hotel and saw all the devastation. You immediately understand what people are feeling when you see it for yourself. I didn’t know if other businesses were rebuilding or if they might be scared or unable to get insurance or whatever, and I thought, no matter what, I’m rebuilding. You talk to the people and feel their spirit and you know that they’re not going anywhere. And the comments that I’ve gotten are positive. People are telling me it’s great that I’ve hung in there and was opening Rise. It’s my tiny little contribution, but I think it all adds up. And the more publicity there is about business coming to or staying in Biloxi and New Orleans, the better it is for everybody.

New Orleans must have been a perfect locale for you to develop one of your hip hangs, Whisky Blue, at the W New Orleans. By the way, that background of blue light behind the bar is so cool!

Thanks so much! People in New Orleans like to have a good time. They like to drink, they like to socialize, they love good music, and that’s what my businesses are all about.

We’re fortunate we didn’t have much damage after the storm. Business dropped a bit, but it’s picked back up. Our employees hung in there as well. I talked with them, and things seemed to be going good. I was glad to hear that. I was just there for two nights and both nights were really busy; the city seemed concerned about having a good time and that felt good. During the Essence Festival, we hosted a party for Vibe magazine. What do you love about New Orleans? I love music. To be able to go listen to these jazz and blues bands that have been playing forever in these little bars is amazing. Those musicians are super talented and are playing because they truly love music. You can picture them playing Madison Square Garden, but they don’t care if there are ten or a thousand people that comprise their audience. They are playing with as much soul as possible. I love that, and I love the fact that people are truly friendly in New Orleans. There’s nothing like Southern hospitality.

And the food is incredible. My favorite restaurant is the Praline Connection. That’s some of the best fried chicken ever! I love that place. We like to go to Nola to eat. I love to have the local experience and walk around. And New Orleans is such a great mix of people as well. It’s truly the most European city in America.

Recently, I took a tour of all the devastation with a friend from St. Bernard Parish. We drove around for five hours. That was truly unbelievable. It looks like the destruction just happened! That’s sad, families of five living in FEMA trailers still. It just doesn’t make sense.

You are married to the fabulous Cindy Crawford, so obviously, you fell for an intelligent, cool, funny, witty woman who has her priorities straight…

She’s not bad looking either!

Wait! I didn’t get to that part yet about her being the most absolutely gorgeous woman in the world! You both have busy schedules, but I know that you both value family tremendously.

Definitely. It’s always family first, then friends, and then business. We make sure to go away on a vacation for two weeks with the kids. We’ll go to a lake and barbeque, fish, water-ski… like a normal family does, because we truly are a normal family.

What future projects are you developing now?

We’re opening the lounge, bar and the pool area at the San Diego Hard Rock Hotel. And we’re working on our Mexican restaurant Mex in Scottsdale, Arizona, at the Fairmont Princess. I also have a line of drink mixers coming out later this year called the Rande Gerber Bar Collection.

Are you living the dream you originally conceived of regarding your career?

I didn’t set out to be in the bar business. But I did always set out to be an entrepreneur and work for myself, so I could make my own schedule. It’s working out great. And I love design, I love socializing, and I love creating an atmosphere where people can have a good time. In our bars, we’ve had different musicians link up to do projects together, and we’ve had writers who’ve met directors and forged working relationships. So, it’s great when all of that business stuff happens. But when someone says, “Hey, I met my wife at your place ten years ago. Now we’re married and have three kids,” that’s the best feeling of all.

2.96K
previous He's Got the Look
next Charting a New Course