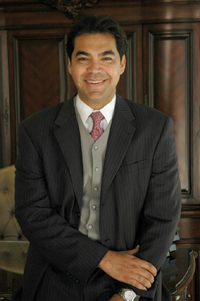 Anyone who has spent anytime at all in New Orleans knows that its the vibrant community and unique cultures of the city that make it what it is. Hurricane Katrina threatened not only the infrastructure of New Orleans but also our people and our way of life. The 17-member Bring New Orleans Back Commission (BNOBC) was created by Mayor Ray Nagin as a way to get community and business leaders together to develop a reconstruction plan for the city.

A big part of the commission was the Cultural Committee, the thrust of which was to better the economic and busines environment for the creative community. Its aim was to preserve and further the “vitality that creates our unique cultural fiber.” The committee helped determine which aspects of our culture needed to be fostered and preserved.

An integral part of that committee was Cesar R. Burgos, a partner in Burgos & Evans and chairman of the Regional Transit Authority (RTA). This native of Honduras attended Bonnabel High School in Kenner and got his law degree from Loyola University in 1995. He is proud of what the committee accomplished and hopes that its plans will be adopted by the city.

How did you get involved with BNOBC?

Three weeks into the effort there was a joint decision to break the commission into seven parts. There was infrastructure, economic development, education, health and medical, government and cultural.

I was back here, and it was time to work hard. I was ready and able and guess I made a favorable impression. I accepted the Cultural Committee task and knew I should surround myself with people active in our culture: food, art, music. I asked Wynton Marsalis to serve as co-chair. We felt that we had put together a good team that represented New Orleans culture.

Initially, what did you want to accomplish?

We wanted to come up with a way to rescue what we had here culturally. The question was how to recoup what we had lost. There was not a lot of government support for cultural elements here.

Among our objectives were to rebuild our talent pool of artists and cultural entrepreneurs, repair facilities and market New Orleans as a world-class cultural capital. We have many qualities here that you won’t find in other cities, we have a certain “spice.”

With all the talk of plans coming from all directions that spanned so many months, do you feel BNOBC accomplished its goals?

Well, the commission was dismantled in the first quarter of 2006. However, we feel that our reconstruction plan gave momentum to many things that followed. For example, the LRA [Louisiana Recovery Authority], formed right after Bring New Orleans Back. Just this week, the LRA accepted Dr. Blakely’s proposal. We provided the initial roadmap for the rebuilding. What this did was provide political leaders with the tools to initiate meaningful discussions about funding. We needed experts and competent people, and we wanted to get the ball rolling and motivate others to do similar things.

Is that happening? Is it helping in the rebuilding?

There are many people and organized groups that refer back to our plan for guidance. But, is New Orleans going to rebuild exactly the way it was? We don’t know, but there were new ideas. Our plan talked about the possibility of a commuter train— this was spearheaded by the DOT [Department of Transportation Development].

What would you count among the chief learning experiences from your involvement?

I learned that our culture is by far one of the richest in the world. It is extremely diverse, even more diverse than some of the major cities in Europe. When it comes to culture— music, art, food, people—New Orleans covers it all. For every dollar we invest in culture, we get back $40. We had a group from the London School of Economics that studied this.

That would make sound business sense. So it is verified.

Also, our plan alludes to the tough lot musicians have had. We propose affordable housing and venues where they can earn decent wages. We recommended that the city should allocate money and provide housing incentives for musicians and artists. We are working to get the city to commit funds.

Now that you have finished your work with the commission, you are still with the Regional Transit Authority.

I am chairman of the RTA. It’s an appointment by the mayor, and it is a volunteer position. One of the ideas we discussed is the commuter train from Baton Rouge to New Orleans. Every politician has approved and supported our ideas on this.

There have been many questions about streetcar service. Any reason why the Canal Street line was up and running before St. Charles?

The St. Charles Avenue line was due to be upgraded even before Katrina. When the storm hit, it devastated the entire catenary system [the pole that touches the overhead wire]. But the St. Charles line was older and needed work. Canal Street was easier to get running because of fewer obstructions and the tracks and system were newer.

Right now we have the St. Charles line running to Lee Circle from Canal. The plan is to have the streetcar going as far as Napoleon Avenue this fall. Then the rest of the way will follow in 2008.