Learn all you can about this disease, both in terms of risk factors and treatment options 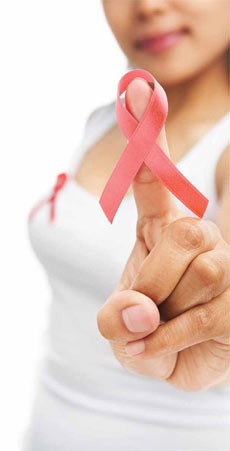 October is Breast Cancer Awareness Month, which makes it a prime time to understand the disease. It is also an opportunity to learn more about your body and what is normal for you. After all, a simple action like performing a self breast exam or following the screening recommendations can save your life.

As women age, the breasts change. “Young women tend to have more-dense breasts that are more cystic and affected by hormonal cycles. Finding a cystic lesion that is tender soft, mobile or tender to touch can be considered normal,” says Dr. Jennifer Laguaite, an obstetrician-gynecologist at Touro Infirmary. You may find a fluctuation in the size over time related to your periods. “As you get older, the breast atrophies as it gets smaller and less fibrocystic. That is when we see more abnormal findings, and in the 40s and 50s, cancer is a greater concern.”

Pay attention to your breasts by doing a monthly self breast exam about five days after your last period when bleeding has stopped. “In a normal breast, the skin is smooth and regular. Sometimes one breast may be larger than the other and that is acceptable,” says Laguaite. You should feel for differences in the same fashion each month. “Stand in front of the mirror with your hands held along the side looking at the breasts to be sure there are no skin lesions or masses that are abnormal. Raise your hands above your head to look at the breasts and see if there are any changes in skin shape, dimpling or puckering,” instructs Laguaite. Now, take the final step. “Lay flat to do the full breast exam, feeling the entire breast tissue, from the sternum to the armpit to feel for lymph nodes and to express the nipple to see if there is any bloody or abnormal discharge.”

Do not underestimate the power of the self breast exam. “Many patients come in and they are the first ones that feel something abnormal in the breasts. It is usually not the doctor that feels something; a lot of times it is the patient,” says Dr. Adam Riker, the medical director of cancer services at Ochsner Health System. Breast cancer may be less common in men, but it can happen to them as well, so they should pay attention.

Your gynecologist should also do a clinical breast exam annually. Laguaite says, “I ask the woman to raise her arm and I look to see if there are any changes in the skin texture, like dimpling or puckering or if one nipple is inverted. I have her lay down with one hand above her head and I use three fingers generally in an up-and-down fashion feeling all the breast tissue from the sternum to the axillary, which is the armpit, and I feel to see if anything is enlarged or abnormal.”

Mammograms are recommended annually for women 40 and older. “The mammogram is a radiologic exam that allows us to look at the breast and see if there are any changes that would be indicative of cancer. It is for screening and also for early detection,” explains Dr. Veronica Gillespie, obstetrician-gynecologist at Ochsner Health System. You should not be fearful of the radiation in a mammogram, as the amount is quite low. “I have had patients tell me that the mammogram causes cancer, so there are myths about it and a lack of understanding as to why we do it,” says Gillespie.

When you know what to expect, the mammogram becomes easier. It is uncomfortable and requires compression, but the compression only lasts a few seconds. The whole procedure takes about 20 minutes and is not a painful exam, assures Laguaite. Do not be afraid to ask questions about the screening. “You should ask for a bilateral digital screening mammogram because that is state-of-the-art versus the standard X-ray mammography, which is not as sensitive or thorough,” says Riker. If you are hesitant about going, talk to a friend or family member about why the mammogram is important to you and set a date to go together. Sometimes having a companion come along relieves stress and offers a sense of encouragement.

Other options are available for screening as well. “We now have the breast MRI, which is a big advance in terms of increasing the sensitivity of finding abnormalities in the breasts,” says Riker. This should be a last resort, as women should always start with the mammogram as the baseline study.

Though the cause of breast cancer is unknown, one of the major contributors is overexposure to estrogen in any form. “If you have never had a baby, that means you have never had a break in your cycles where you are not exposed to estrogen, which can increase your risk,” says Gillespie. Childbearing later in life as well as early menarche and late menopause can heighten risk, as well as excessive alcohol and diets heavy in fat. “There have also been some links to vitamin D deficiency,” says Gillespie.

Maintaining a healthy weight is one factor that you can control. “We think the reason why obese women get breast cancer more commonly is because the estrogens can get stored in the fat tissue,” says Riker.

It is important to share your family history with your gynecologist. If you have a strong family history of breast cancer, you may be a candidate for genetic testing. “For women younger than 40, we are more concerned if there is a genetic cause and not a spontaneous breast cancer,” says Gillespie. Women with a family history of breast cancer should start surveillance at a younger age than someone without a family history. “The rule of thumb we go by is if you happen to have a first order relative that is a mother or sister who had breast cancer, your screening should start 10 years before [the age] they were diagnosed,” says Dr. Roy Weiner, associate dean for clinical research and training at Tulane Medical Center and breast cancer physician at Tulane Medical Center. This means if you had a family member diagnosed at 45, you should begin screening at 35. Remember that genetics is not always to blame. “We know that 10 to 15 percent of breast cancers might have a genetic component, but that leaves another 80 to 85 percent where we do not really understand what causes the breast cancer,” says Riker.

If cancer is diagnosed, there are various treatment options to consider. “Breast cancer surgery is more breast-conserving, so sometimes it is possible for women to have a lump removed instead of the whole breast. There are also new modulators and medications that can increase the immune system’s response to the breast cancer,” said Laguaite.

A new approach is being embraced. “Research is focusing on the biology of breast cancer so that people can have the opportunity to have more specific effective therapy with fewer side effects,” says Weiner. Treatments are individualized.

Some treatments involve specific drugs that target certain genes that are expressed in breast cancer. “For instance, there is a gene called HER2/neu which makes a protein, and there is an antibody that binds it and causes those cells and no others to die. There are some side effects of this therapy, but it is highly specific,” says Weiner. For a long time, doctors have taken advantage of the fact that most breast cancer cells express estrogen and progesterone receptors, which are needed for the cells to survive. “We have developed drugs that block those receptors and essentially deprive the cells of their needed estrogen and progesterone,” says Weiner.

In New Orleans we have wonderful resources. Riker suggests that patients should seek out a breast cancer program where they have a team of physicians taking care of them as opposed to just one. “Ochsner has the only accredited breast cancer program in the state of Louisiana so you know what you are getting,” says Riker. “New Orleans is an area where breast reconstruction with specialty flaps called DIEP originated, so the patient has a full spectrum of treatment options.”

Doctors are not giving up when it comes to finding a cure. “I am hopeful for the future and eventually we really hope to be able to prevent breast cancer,” says Weiner. The key lies in doing your part. “We want women to understand why it is important to take care of themselves and not get so frightened that they avoid doing so,” reinforces Weiner.

Understand the facts but remember there is a bright side. “Every woman should know that she has a one in eight chance of having breast cancer in her life,” says Laguaite, “but with newer modalities of diagnosis and earlier detection, there are about 2.5 million cancer survivors at this time.”

215
previous Understanding Ovarian Cancer
next They’ve Got Your Back