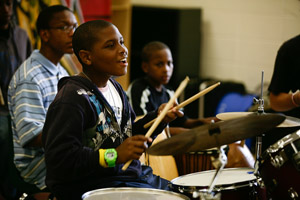 During an intensive summer program, Kids Rethink New Orleans Schools challenges a group of 25 middle-school students to imagine what an ideal school would look like. Then the students, known as Rethinkers, draft concrete, practical recommendations to move our public schools closer to their vision. Last year, Rethink launched clubs that meet at six schools during the academic year, which greatly expanded the number of students involved in the program. Jane Wholey, founder of Rethink, spoke to New Orleans Living about why student voices are vital to educational reform.

What prepared you to launch a program like Kids Rethink New Orleans Schools?

I’m a former reporter, and for 25 years I ran a media-consulting business that worked with community organizers and grassroots groups to get their voices into the democratic process. I’m also a mother of two kids who went to New Orleans public schools. After Katrina, education was constantly in the news and on everybody’s minds. It struck me, however, that there was no voice of young people in that conversation.

When did the program start?

Ultimately, we pulled together a group of young people in the summer of 2006, which is when the kids really came back in big numbers after Katrina. We held a Rethink summer program and capped it off with a news conference. It was a huge hit. It got a lot of national attention. Equally, if not more important, the kids were blown away to see that they had the power to be heard.

Why is a program like Rethink important to New Orleans’ educational reform effort?

Not only do students come up with good ideas, but they come up with different ideas. There are lots of things that go on at school that kids are acutely aware of and that grown-ups just aren’t.

The kids were very concerned about the lack of hand-washing stations in lunchrooms. The need is so obvious that it’s surprising the school administration hadn’t noticed it before.

It makes perfect sense. When kids go to lunch, they can’t go all the way in the other direction to wash their hands. Lona Hankins, who is head of capital projects for the Recovery School District, said she never would have thought about that. She said there will be hand-washing stations in every school that she designs.

What are some of the other insights from the Rethinkers?

The kids said they don’t need metal detectors. It makes them feel like prisoners. One little boy, who is in sixth grade, said, “What we need are not metal detectors but mood detectors. What’s really dangerous is when someone comes through those doors in the morning and something awful has happened to them, like their big brother got blown away the night before.”

How do you turn that insight into something that can be acted on?

There is obviously no such thing as a mood detector, but how do you serve that purpose? So the kids came up with the idea of Student Intervention Teams, or SITs. You have students and some grown-ups that are at the door greeting people and can spot a kid who is in trouble. It’s about creating a welcoming feeling. The Rethinkers are also really concerned with the way suspensions and expulsions are used to correct infractions. They came to discover an approach called restorative justice, which is about helping a student identify the harm they created and then actually addressing the harm rather than getting punished. The Rethinkers were all over that.

The students’ recommendations are practical and concrete. How do you get them to focus their ideas?

What we do is ask them questions. We say that Rethinkers can have big visions. And then we say, “If that’s your vision, what would you say to your principal and fellow students about how, in the next academic year, they could take some baby steps towards that goal?”

How have administrators responded to the Rethink proposals?

One of the first things [Recovery School District superintendent] Paul Vallas did when he started was to come to a Rethink news conference. And he has been a huge supporter. Does that mean that he has translated all of the kids’ recommendations into actions? No. But it does mean that he has seriously considered them. And once the Rethinkers get him on record saying, “I think that’s a good idea,” then our job is to hold his feet to the fire.

Do you think these student voices will remain a part of the education conversation in New Orleans?

Absolutely. That’s one of the deeply gratifying things about all the work that we’ve done the last five years. Rethink and other groups have created a very legitimate student voice in New Orleans. Young people are part of education reform, and that’s something that we can be proud of in this city.