Break out the robust reds and make a toast to fall 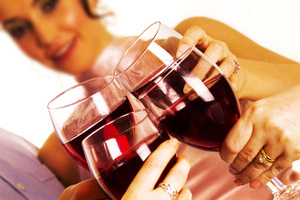 October is one of my favorite months. Not only is football season in full swing (go Saints, go Tigers!) and festivals abundant, but the sweltering heat has given way to lower humidity, cool breezes and crisp nights. It’s also my birthday month, but that’s another story. My circle of oenophile friends also anxiously awaits the return of fall weather, as with it comes what I’ve dubbed WOP Night, or Wine on the Porch. (Yes, I’m part Italian, which gives me the ability to say “Wop” without the fear of insult or retaliation!) And, for red wine lovers like myself, it means that we can finally pop a cork, fill up our Riedel glass with a robust sizzling Shiraz or a zesty Zinfandel and comfortably sip away without the threat of spontaneous combustion. In honor of “big red wine month” (there really should be such thing!), I’m happy to present some of my favorite intriguing, powerful red grape varietals from around the globe. So grab a scarf and a corkscrew and dig deep into your Eurocave. Chances are you’ll discover a ruby-colored gem just waiting to be unearthed.

Grenache/Garnacha
This southern Rhône staple is responsible for producing some of France’s most-revered reds, such as Châteauneuf du Pape and Gigondas. Despite the fact that it has deep roots in the Rhône region, it is believed to have originated in Spain, where it is referred to as Garnacha. The grape has also found success in Australia and the United States, where it is most often used as a blending grape or for bulk wine. General characteristics include earthy, rustic aromas and flavors like smoke and leather and dominated by black fruits like blackberry and black currants. Typically full-bodied and robust, they range stylistically from intensely powerful to soft and supple. Pair Grenache with grilled or roasted meats, barbecue, cassoulet, flavorful bean and lentil dishes and savory cheeses.

Malbec
This inky grape is originally from Bordeaux, where it is typically used as a blending grape to add color, backbone and tannins; in France it has not found much glory on its own. It does produce powerful, rustic, gamy examples in Cohors, where it is known as Cot. However, in Argentina, it is the red grape star of the region where it shines brilliantly and generally makes lush, medium-to-full-bodied, black fruit–driven beauties. Common descriptors include spicy, blackberry, plum, leathery, jammy and earthy. Pair Malbec wines with red meats, barbecue and spicy cuisine, such as Mexican, Indian or Cajun.

Mourvèdre/Monastrell/Mataró
Another Rhône standout, known as Mourvèdre in France (it is the main red in Bandol), is cultivated for its uncanny ability to produce a range of wines, from big, bold reds to delicate rosés. Native to Spain, it is still widely grown there, where it is called Monastrell or Mataró. Mourvèdre is capable of producing delicious single varietal wines, but it is often used for blending because it adds structure, depth of color and firm tannins. Most often called Mataró in California, the thick-skinned grape is rarely seen on its own, but rather used as a blending grape. Typical qualities include a distinct spiciness (clove, thyme, black pepper), violets, leather, smoke and black fruits with a gamy, meaty nuance. Enjoy this savory wine with duck, grilled beef and earthy dishes like mushrooms and root vegetables and bold cheeses.

Nebbiolo
This Italian stud is capable of producing some of the most powerful red wines in the world and arguably the finest red in Italy. Its claim to fame lies in the famous brooding, deep, dark, tannic Barolo wines it makes, but Barbaresco and Gattinara offer well-made, robust Italian options. This challenging, region-specific variety, boasts bold tannins and lively acidity, scents and flavors of leather, black fruits, truffles, prunes and violets and extraordinary long-term aging potential. It is grown to a much lesser degree in California, Oregon and Washington. Drink this sturdy wine with flavorful foods like ragouts, stews, grilled meats and hard cheeses.

Tempranillo
The principle red grape of Spain, Tempranillo is also the primary grape used in making port, where it is known as Tinta Roriz in Portugal. Most often used in conjunction with other varietals, it is also cultivated in Australia, California and Oregon. Often called the noble grape of Spain, Tempranillo-based wines are generally medium-to-full-bodied, with firm tannins and acidity and characteristics of fresh herbs, cherries, red currants, leather, vanilla and tobacco. Enjoy these Spanish sensations with cured ham, lamb chops, roasted vegetables, casseroles and sheep’s milk cheeses.

Syrah/Shiraz
The origins of this bold variety are believed to be Southern France, where it is called Syrah and is one of the main grapes used to make fabulous northern Rhône reds, namely in Hermitage, Cornas and Côte-Rôtie (it is widely used in southern Rhône as a blending grape). The grape has also found much success in Australia, where it is called Shiraz and is the pride and joy of the country. It also grows well in Argentina, Chile, New Zealand and the U.S. These full-bodied, robust wines can deliver a range of scents and flavors, including a distinctive peppery quality, black fruits, violets, leather, mushrooms and smoke. Pair these bold beauties with wild game, grilled meats, red pasta sauces, stews and robust cheeses.

Zinfandel
The lineage of this spicy, bold varietal has been debated for some time. Originally it was believed to be a descendant of Italy’s Primativo grape, but recent DNA testing indicates that Zin is actually a clone of Croatia’s Crljenak Kasteljanski variety. (Try asking for another glass of that!) It is now known that Zinfandel and Primativo are genetic twins, with both distinct differences and shared traits such as lush, jammy fruit flavors and hallmark spiciness. Zinfandel is one of the chameleon grapes of the wine world. This fascinating red variety has the ability to produce wines across the spectrum; some are light-to-medium-bodied, red fruit–driven and almost Beaujolais-like, while others are robust, highly tannic, black fruit wines bursting with black pepper, which can take on portlike qualities. Zinfandel can be paired with a variety of foods, from roasted chicken and pasta to barbecue, grilled meats and even chocolate.

90
previous Lay Off the Bottle
next As You Like It