Smoking Out the Truth 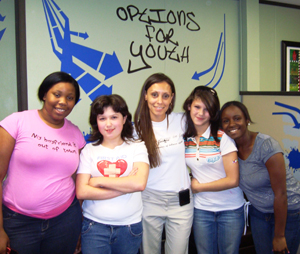 Andrea Girod Espinoza has made it her mission to educate young women about the dangers of smoking. A pulmonary and critical care doctor who practices at the Leonard J. Chabert Medical Center in Houma, she founded Female Awareness of Tobacco Effects, or FATE, to teach high school–aged girls about the consequences of taking up smoking. In informal talks, she and the other members of the organization, including Espinoza’s mother and sister, speak directly to girls about the dangers of lung cancer, which kills more women than breast, ovarian and cervical cancers combined. Espinoza talked to New Orleans Living magazine about why more and more young people are smoking and how we can combat this alarming trend.

Why did you start FATE?

There was one patient in particular: a young woman who died of metastatic stage-four lung cancer, which is associated with tobacco. I had become close to her over a two-to-three-week period, and she had a young son who was 2 years old. I had a not even 1-year-old and a 3-year-old child at home. She was similar in age to me. And you stop to think what makes our lives so different. If it’s just something as simple as tobacco, then that’s scary. I started polling my patients, and it saddened me how little education and awareness there was about smoking.

Is there a feeling in the medical community that the battle against tobacco is over?

I think in a certain sense yes. I would ask young medical students and residents if they had talked to patients about tobacco use. They would say, “Yeah, but what’s the point?” People felt like it wasn’t even worth the effort. They thought that these people knew the consequences and yet they still decided to smoke. But there is such a lack of available facts when it comes to things like lung cancer and women. It’s the number one cancer killer of women, but it’s the least talked about.

Are the health risks different for women?

There is a tremendous amount of research being done with a paucity of funding on women and lung cancer, because women do not respond the same as men to chemotherapy. They actually react differently to lung cancer, specifically because of the hormonal changes.

Who is still smoking today?

The numbers don’t lie. In the United States you can see the morbidity and mortality of overall lung cancers and death, and it’s almost completely correlated with the increased tobacco use among women. It’s unnecessary. Men’s mortality has actually decreased. Men have either gotten smarter or their doctors have gotten tougher on them.

Why are more women smoking?

When I go to these high schools and ask the girls if they know the number one cancer killer of women, they say breast cancer. They’re shocked when I say, no, almost twice as many women are going to die of lung cancer. I think that’s the reason. No one is talking about it, so girls think that it can’t be that bad.

Why aren’t we talking more about smoking?

It is looked down upon. You see people all the time hiding the fact that they smoke. It shouldn’t be judged and it should be your choice. You should have the right to smoke if you want, but my problem is that the young people and the women I take care of have often never had the opportunity to make that choice with as much information as possible. It’s like anything else. You can get on a motorcycle tomorrow, and that is your decision. But you need to know all the dangers involved. It’s only fair.

How has FATE been able to educate young women about these dangers?

We’re not about being in your face. When we’re invited to community events, churches or high schools, we go in with a laid-back attitude and teach on their level. I don’t even make it a big deal that I’m a doctor. The students feel cool and relaxed enough to ask me one-on-one questions. We also don’t believe in any pamphlets or papers. When someone wants more information, I send them to websites. Handing out fliers separates me from them. It takes away from that intimacy that, sadly enough, we’ve lost in medicine. Half the time, the doctors are looking down at a chart.

Cigarette packages have increasingly explicit anti-smoking messages. Does that message not get through?

I don’t think so, because when you buy cigarettes your goal and desire is to go in there and obtain something that you want. And it does not matter what that package says. You might actually take offense at it and cover it up.

Can we ever fully eradicate smoking?

I don’t think we can. But these young girls should be able to make their life choices armed with as much good information as is out there.

331
previous Young Visionaries
next No Child Left Behind