The Land of OZ

On its 30th anniversary, an iconic radio station continues to play the soundtrack of the city 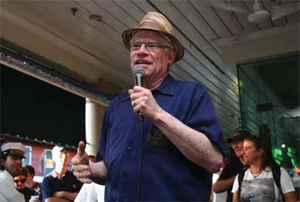 WWOZ-FM is so tuned in to the rhythm of the city that it’s got an uncanny knack for playing just the right song at just the right moment. Whether it’s catching Sidney Bechet’s “Blue Horizon” on a sultry summer night after a perfect dinner date or jamming to Rebirth Brass Band on the drive home from work, the deejays have a special gift for giving you the exact song you didn’t realize you needed. And it doesn’t even matter if you’ve never heard the artist or song before, the music can be an affirming reminder of why we live in New Orleans.

“The music really comes from the people of the city,” says WWOZ general manager David Freedman. “Our goal is to support what is New Orleans about New Orleans and that is its music and especially the roots music that comes out of the cultural diversity and rich heritage of the city.”

The nonprofit community radio station hits a milestone next month when it marks its 30th anniversary. WWOZ, or OZ as locals call it, has become the standard-bearer for protecting, preserving and promoting New Orleans music, especially after Hurricane Katrina. The flood (and subsequent loss of electricity) forced OZ out of its Armstrong Park headquarters into new, larger digs at the French Market.

The move kept the music playing at a time when some feared the city would lose its cultural vibrancy as it struggled to rebuild. Fans across the world flocked to OZ as they rallied around New Orleans’ musicians. “We got so much national attention and international attention that people poured money into us in 2005,” Freedman says. “It just put us on steroids.”

The station has more than 6,600 subscribers, 15 employees and an operating budget of almost $4 million, which includes about $1 million in in-kind donations, Freedman says. OZ has more than 100 volunteer deejays who host shows highlighting just about every genre of local music including traditional jazz, rhythm and blues, Cajun and zydeco, funk, early rock ’n’ roll, Caribbean and many more.

“Each one of [the deejays] gets one show to do and each one represents a root into the city,” Freedman says. “So you’re getting a very rich and varied serving up of the different flavors of the city.”

Listenership is growing thanks to online streaming and new apps that let anyone anywhere in the world hear OZ live using an iPhone or iPad. Roughly 50,000 people regularly tune in to OZ locally. Station managers are convinced that they have a lot more listeners outside of New Orleans than inside based on Web streaming, out-of-state membership pledges and a growing Facebook presence. OZ has more than 22,300 fans on the social-networking site.

“Everything that we’ve done has been done with the idea of building more and more national and international support for the station,” Freedman says. HBO also raised the station’s profile by giving it several shoutouts in Treme, the critically acclaimed series about post-Katrina New Orleans. One of the show’s main characters, Davis McAlary, plays an OZ deejay who gets in trouble for veering from his “playlist” and is later fired after allowing a musician to perform an unfortunate voodoo ritual live on the air. Freedman loved the publicity but points out his station famously eschews playlists.

“It’s a great irony,” he says, adding that the show’s creators didn’t consult with him before featuring it in the script. Rejecting playlists is an anomaly in today’s radio landscape, which is dominated by conglomerates that own hundreds of stations and tightly control their formats. Freedman laments the time before corporations “franchised the culture,” when each community had locally owned radio that reflected local tastes.

OZ still plays music the old-fashioned way without auto programming. Deejays get to pick their own music as long as it fits their show’s genre. “We trust them because they are passionate about the music. That’s part of the joy of listening to OZ is that you hear things that you’ve never heard anywhere because they have got incredible music collections,” he says.

Some of these collections include rare performances or records that are long out of print. (And how many of us have struggled to write down lyrics or fumbled with our smart phones to try to find out the name of an OZ song only to discover that it’s so local or so vintage there’s no hope of finding it on iTunes?)

Keeping local and unique is the key to growth as the station prepares for the future. Freedman sees radio changing radically as more consumer devices adapt to broadband radio. Services like Pandora already let users essentially create their own music stations based on their individual tastes. Instead of accessing channels through radio airwaves, more people will use mobile Internet devices to tap into music streams from sources and stations across the globe. “That means every market will be in competition with every market,” he says. “Now you can listen to anything.”

That means that stations like WWOZ, which is distinctly tied to a city and musical identity, will be uniquely positioned to capture listeners. When you listen to WWOZ, you can be a New Orleanian no matter where you are, because you’re tapping into the soundtrack of the city. “To be here in New Orleans is a very special privilege. We’re really blessed,” Freedman says. “What we’re doing here at WWOZ is a way that we can express just how blessed we feel.”

277
previous A Time for Thanks
next Berry Healthy!