A Time for Thanks 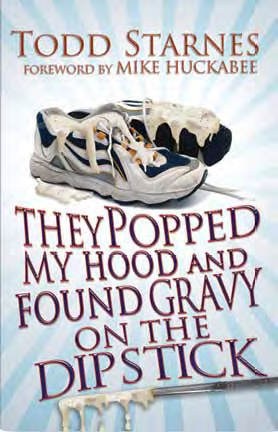 “Let’s be honest,” Todd Starnes says, “given the choice of eating cornbread with Paula Deen or sweating to the oldies with Richard Simmons, most of us would ask for a cast-iron skillet in a heartbeat.”

It is humor and faith in God that gets Starnes through Thanksgiving, a time of year when eating is everything. He was once a really big guy, at 5 foot 9, 300 pounds. Now at 150 pounds, Sarnes is literally half the man he used to be. He went from a size 54 waist to a 36. Sarnes also had an enlarged heart. And today, deep inside, he has a graphite aortic valve. It was put in when he was 37.
At first, Sarnes says, the ticking noise of the valve was extremely distracting and loud. “It was nearly impossible to sleep, and whenever I did get some rest, I woke up expecting to see Morley Safer from 60 Minutes hovering near my bed.”

Looking at life’s lighter side has gotten Sarnes through every day of every season since his life-saving operation in May 2005.
So after major open-heart surgery, massive weight loss and finishing his goal of running the New York City Marathon, what does Thanksgiving mean to him? “I think it still means turkey and cornbread dressing,” he says with a chuckle.

In his book, They Popped My Hood and Found Gravy on the Dipstick, Starnes, who was born in Memphis, raised in Mississippi and went to high school in Louisiana, writes, “Obesity is nothing to laugh about. It’s killing our nation, it’s killing our fellow brothers and sisters in Christ and it almost killed me.”

“I am a true son of the South,” Sarnes proclaims. “I love my tea sweet, my chicken fried and my biscuits buttered. But my true passion in life is barbecue.” His passion for Southern specialties go on: “I loved buttermilk biscuits, fried catfish, my Aunt Norma’s broccoli casserole and my Aunt Sue’s Thanksgiving Day turkey. And don’t even get me started on Mom’s sweet potato pie. I loved chicken-fried steak and chicken-fried chicken. And I loved the holy grail of the food chain: the pig—pork chops, pork rinds, pork and beans.” Sarnes swallows, pauses to clear his throat and concludes, “If it’s not obvious, I love food. I was a very happy fat person.”

This is true. I know first-hand. Sarnes was a very happy fat person. I met this “son of the South” in October 2005 when he joined our team at Fox News Radio in New York City. His desk was near mine, and we became fast friends. The reason was simple: He was happy, always joking, always upbeat and always making me laugh aloud.

Standing out in my mind is the story Sarnes told me once about his first encounter at a New York deli, details of which are also recounted in his chapter “New York, New York, a Heck of a Town!” Sarnes told me, “Ya know, Robyn, I went downstairs to the deli and I ordered a plain bagel.” “Yeah, so?” I said unenthused. The deli guy wanted to know, “ ‘Do you want me to schmear your bagel?’ and I say stunned, ‘You want to do what to my bagel?’ Robyn, the guy says it again. ‘Do you want a schmear?’ ” By this point, my sides were absolutely aching from laughter, and I realized in an instant that Todd Starnes would be a lifelong friend. Sarnes continues with his tale. “I didn’t have a clue what the guy was talking about. Back home if a guy schmears another guy, he could end up getting hurt. Apparently, though, a schmear has something to do with cream cheese. I think.” I was doubled over in pain from laughing so hard. I think they probably heard me giggling all the way down South.

Read Sarnes’ book, and you will laugh and cry at the same time. Sarnes writes a chapter called, “The Last Supper,” about gathering dear friends for the final dinner before he goes under the knife. And then there’s the story about buying pajamas before his operation. Grab your Depends before you read “There’s a Draft in This Gown.” Sarnes asks a department store clerk, “Do you have anything in guy colors?” Only to be told that the store has “a lovely red silk two-piece” in stock. “What else do you have?” Sarnes inquires. “The only other thing in your size would be these SpongeBob pajamas.” The clerk goes all philosophical, “Frankly, sir, I wouldn’t be caught dead in them.” To which Sarnes replies on the eve of his open-heart surgery, “That’s what I’m afraid of.”
But all funny folks have a deeply serious side, perhaps the laughter masks immense pain. During Sarnes’ incredible journey to better health, he lost both his parents. “My father died. And I miss him,” Sarnes writes. A few months later, there was a call that his mother had passed away too. “After 61 years, her heart simply ran out of seasons.”

I told Sarnes he’s a guy who has a lot to be thankful for. “Yeah, that’s true, Robyn. Most importantly, good health and a great family that stood by my side during some very difficult times. They say your family, they have to love you regardless, and that’s really true.”

I go back to my original question. “Sarnes, seriously, what does Thanksgiving mean to you? And don’t make me laugh with this turkey and cornbread dressing stuff!”

“Honestly,” Sarnes says, “it means spending time with the family. One of the things my mother taught me is that great things happen around the dinner table, and I think that certainly is the case during Thanksgiving. For a lot of families we are so scattered now that it’s really the time of year we can come back home and be with family, get back to the basics and get back to our roots.”
Sarnes reflects on Thanksgivings past and poignant memories of his mom. “I’ve thought a lot about my mother’s life. She could’ve done whatever she wanted. She was a gifted and beautiful singer. But she chose to make her life at home. She was a housewife, and the kitchen was her kingdom. She never achieved fame or fortune. Instead, she found joy in cooking a good meal and found satisfaction in the full bellies and empty plates at her table. And she will always be remembered for the way she used her culinary gifts to serve up heaping helpings of love, piled high with sugary sweetness and a dollop of buttery goodness on top.”
A memorable Thanksgiving moment that Sarnes is forever thankful for.

Look for Todd Starnes’ next book, Dispatches From Bitter America, scheduled to be released in June by B&H Publishing Group.