Whoa, baby! Did you see what I saw? 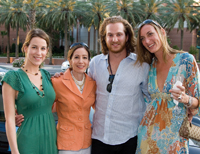 It was a cannonball race car run from New York to Saks Fifth Avenue in celebration of the launch of the David Yurman men’s All Titanium Belmont and All Black PVD watch collection. Evan Yurman, designer of the collection and son of David, drove the Yurman Porsche GT3 in the rally along with drivers of the Classic Car Club of Manhattan. Guys, you need to know that the car served as the design inspiration for the watches! Lisa Conrad of Saks was coordinator of the event, as her friend Adam Booker (former tour manager for Judas

Priest and Led Zeppelin) called her to put the stint together … now that’s showbiz! Last I heard, the hunky hunks were spotted at Whiskey Blue, Acme Oyster House, Mother’s and, of course, on Bourbon Street. With last year’s South Beach mojito tab at one club being $1,400 for this group, I am sure our economy got a shot in the arm. Oh, and did I hear wedding bells while I was in Saks? Stay tuned!

Lynn Giuffria, executive director of Ronald McDonald House Charities, a home away from home for sick children, called to say that the recent afternoon tea at the J. W. Marriott hosted by Sarah Ferguson, Duchess of York and ambassador to Ronald McDonald House, was a huge success. Kudos! Royalty abounds as Prince Harry and entourage were just spotted at a royal private dinner at Windsor Court. 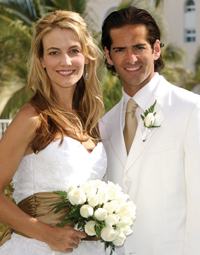 Jeff Bloom, formerly of New Orleans, and Sara Wannabe have returned to their home in Houston after honeymooning on St. John Island and Argentina. Their beach wedding in Cabo San Lucas was quite lovely and included a whirlwind week of partying by a huge coterie of New Orleans friends and others from across the nation. Best wishes!

And those oh-so-Southern soirees. It was Juleps in June for the Pirate’s Alley Faulkner Society, and Kevin Kelly’s Houmas House Plantation and Gardens was the lovely venue. Limousines furnished by Carey Signature Livery Service ferried the genteel guests, chef Jeremy Langlois provided the delicious repast with artist Fredrick Guess contributing the lovely portrait of William Faulkner for the live auction.

Andre de la Barre and mother Mary and friends are on the go again. They just returned from Natchez and a weekend of opera during the Natchez Festival of Music. Andre purchased a home there and Buzz Harper, that bon vivant and antique dealer formerly of our fair city and now of Natchez, just sold the Natchez Historical Hotel and his newly renovated mansion (the former Prentiss Club) to the Eola Hotel. But not to worry, Buzz has already purchased another mansion for his latest project! Sharron and George Massey, owners of one of those former Buzz Harper uptown mansions, just bought a home in the French Quarter and are again neighbors of (who else?) Nicholas Cage!

Welcome Nadine and Simon Blake to the French Quarter. Her lifestyle shop, Nadine Blake, is a mustsee at 1036 Royal St. And just a few blocks away, at 1133 Decatur, Bruce Abbott and Cindy McLin have opened the much-needed Decatur News. Thank you! New Orleans needs people like you!

742
previous Ode to the French Quarter
next Is Alli your Ally?