No Child Left Behind

Share Our Strength is eliminating hunger one child at a time 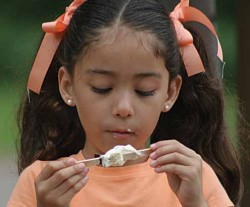 Moved by the famine in Ethiopia, Bill Shore, who had a successful career as a senior staffer for politicians Gary Hart and Bob Kerrey, decided that he must do something to fight hunger. In 1984, he and his sister Debbie founded Share Our Strength, which raises money in partnership with culinary professionals to end childhood hunger. Since its founding, Share Our Strength has raised more than $280 million. After Hurricanes Katrina and Rita, the group set up an office in New Orleans to help rebuild the culinary industry and aid local anti-hunger efforts. Last month, Bill Shore came to town to kick off the No Kid Hungry Campaign (www.nokidhungry.com) in New Orleans, which seeks to increase participation in existing private and government food aid programs. Ashley Graham, the organization’s Louisiana director, spoke to New Orleans Living about Share Our Strength’s work in the Gulf Coast region.

How many kids in New Orleans go to bed hungry every night?
More than 32,000 qualify for free and reduced school meals. That’s a pretty good estimate.

How does that compare with other urban areas?
We’re about on par with the childhood hunger statistics nationwide, but we’ve also got food access issues throughout the city. Here in the Gulf Coast area, of course, we have the additional challenges of rebuilding a food system after the storm, and the oil spill caused extra pressures.

In what way did the storms exacerbate childhood hunger?
Once Katrina happened, you had Second Harvest Food Bank lose, I think, two-thirds of their member agencies. The emergency food infrastructure was decimated. We’re working with a web of community groups to weave a net for kids to make sure they have food where they live, where they learn and where they play.

When you talk about “food access,” what does that mean?
It means there is a grocery store in your neighborhood that provides healthy food. And it means there are children and families accessing all the programs that are available to them, like the Summer Food Service Program, like SNAP—formerly known as food stamps. We’re finding that the eligibility rate is far outpacing participation.

Why are people not taking advantage of these programs?
It ranges from not knowing that you are eligible to paperwork challenges to sometimes the schools themselves, in the case of school breakfast. The schools may not have the staff or the schedule to offer breakfast. Access to the Summer Food Service Program here is exacerbated by the state of the New Orleans Recreation Department. We haven’t had as many summer enrichment programs compared to other areas. So only 13 percent of kids in New Orleans are accessing Summer Food who are eligible for it.

What is Share Our Strength’s role in all this?
We work with governors, mayors and local community organizations, like Second Harvest Food Bank, Greater New Orleans Afterschool Partnership, Market Umbrella and Kingsley House here in New Orleans, to increase participation in existing programs and to help families maximize existing food resources so that no kid goes hungry.

Tell me about Cooking Matters, a Share Our Strength initiative that will launch here next year?
It’s a program we’ve run in other parts of the country. Chefs go into community centers and teach families how to cook more nutritiously for their families and how to better use their food budgets. Parents and the participants really respond to having a chef coming into their community. They graduate after the six-week curriculum and hopefully change their eating and cooking behaviors.

Did Share Our Strength expand its mission when it came to the Gulf Coast?
Yes. We’re generally a fundraiser and a grant maker, and we try to support those agencies addressing the causes and consequences of hunger. After the storm, we had to work on rebuilding the feeding infrastructure. We also wanted to do something to pay back the hospitality industry that has always been the backbone of our efforts. We tried to bring hospitality workers back; we subsidized housing for a while; we helped with reopening restaurants like Dooky Chase and Willie Mae’s Scotch House.

A lot of national organizations focused on our area after Katrina and Rita. Not all of them, however, actually set up offices here. Do you think that affected how successful their efforts were?
I don’t know if locating here is the sole thing, but certainly spending significant time in the region is a major factor in an organization’s success. There are a lot of big foundations and organizations around the country that have their strategies and their best practices, but unless you combine that with the unique resources and the unique circumstances here then you’re not likely to be as successful. What’s nice to see is that the organizations who are doing amazing work here are now creating best practices. New Orleans is going to be known as a laboratory for social justice.

Can we ever really eliminate childhood hunger in America?
This is a problem with a solution. Kids are not hungry in the United States due to a lack of food. They’re hungry because of a lack of access. That is an issue that we can address.

For more information about Share Our Strength, visit strength.org.

387
previous Smoking Out the Truth
next Rapid Recovery