Art on the Horizon 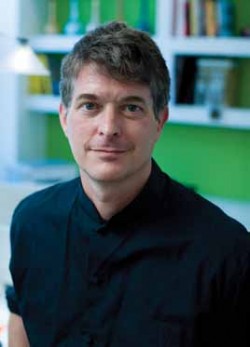 Two years ago curator Dan Cameron mounted Prospect.1 in New Orleans. It was an international art biennial that also gave some local artists a chance to shine. The largest event of its kind in this country, it involved nonprofit museums and spaces throughout the city, drew rave reviews and helped put New Orleans on the global art map.

Initially Cameron’s organization, U.S. Biennial Inc. intended to follow up this year with Prospect.2. However, changes in board membership and funding issues resulted in a delay. In its place, Prospect.1.5 was launched; it’s a low-budget event that has been described as a “bridge” between Prospect.1 and Prospect.2. It is, however, much more. In my recent interview with Cameron, he explained.

Can you talk a little about your background as a curator and your work with other biennials?

My background as a curator had two parallel tracks. One was as senior curator at the New Museum of Contemporary Art in New York. I started in 1995 and left in 2006, because of what had happened in New Orleans. That probably speaks more to the other track of my career. I was really inspired by a 1989 exhibition called Magicians of the Earth, in Paris. It was the first time anyone attempted any kind of global arts survey. I suddenly saw that the future of contemporary art is global. [Since then] I’ve organized exhibitions and biennials around the world, dealing with various aspects of contemporary and in particular global art.

What drew you to New Orleans and inspired you to create Prospect.1?

I fell in love with the city the first time I came here in 1987. I returned regularly in the eighties and into the nineties. [Over the years] I got to know more of the artists and the people who sold art and wrote about art, curated exhibitions and were curators themselves. Around 2000 it became clear to me that New Orleans was probably where I was going to wind up. It generated such significant feelings of happiness for me. There’s no other way of putting it.

Then Katrina happened. I went through a period of disillusionment. The contemporary art community didn’t seem to understand the importance of New Orleans. I suppose coincidentally, a lot of the people I knew in the New Orleans art community contacted me literally days after the levees broke and told me, “We’re talking about how to rebuild New Orleans from a cultural standpoint. Would you like to be part of that conversation?” There was a big meeting in New Orleans in January 2006 with all these people who were so determined to rebuild. I came out thinking, “This is something one can change one’s career trajectory for.” It was one of these moments when you’re called on to do something.

When did you come up with the idea of hosting a biennial here?

I blurted out in the meeting that a biennial was a good idea, and a lot of people agreed. [To support the art community] we needed to get [people from the art world] to New Orleans. The more I thought about it, the more I thought a biennial would be a perfect fit, because of the layout of the city and New Orleans’ role in American art history. There was no reason not to create a new, higher-end level to the tourist industry that was centered on international art.

Prospect.1 was a huge success.

We had around 50,000 bodies who passed through, resulting in hundreds of thousands of admissions. The economic impact was in the neighborhood of $25 million. More importantly, the media coverage was sensational. People really took to the idea of a biennial in New Orleans. Now it seems quite natural.

Your plans for Prospect.2 ran into a few obstacles. What made you decide to do Prospect.1.5?

The economic downturn has gone on much longer than any of us anticipated. For 2009, we were able to pay off Prospect.1 and keep ourselves afloat, and that was about it. Last November we announced that we were going to open Prospect.2 in November 2010. We thought the announcement would result in a sudden surge in corporate support, and we didn’t get it. So we took a very deep breath and regrouped. [As a result, we put together] a version of Prospect that didn’t involve committing ourselves to a multimillion-dollar fundraising campaign. We’ve created it by going through the spare change in our pockets. Instead of complaining about the economy, we transformed Prospect into something that works.

Most important, we [realized] that to succeed, the biennial had to lean heavily on artists with national and international reputations. That includes only a handful of New Orleans artists. On the other hand, there is this very exciting local art scene, made up of a lot of not-for-profits, cooperative galleries, artists’ studios and artist-run spaces. Prospect.1.5 taps into this new talent that’s already here and uses that talent.

What does Prospect.1.5 include?

There are a dozen venues, including commercial galleries and 50 artists and 18 exhibitions. We’ve customized programming at spaces throughout the city. In so doing we’ve managed to bring a lot of attention to local artists who’ve not had a presence here before.

What are some of the highlights for December?

Loren Schwerd is having a sculptural installation at the project space in the back gallery at Heriard-Cimino starting December 4. Loren was displaced after Katrina and moved back to New Orleans recently. This is her first exhibition here in a while. Opening December 11 is an exhibition of Max Toth, who was brought up in New Orleans but moved when he was 12. There’s a fantastic collective called Okay Mountain from Austin doing a video project in the back room of the Arthur Roger Gallery. There’s also a group exhibition called The Machine in the Garden at the Octavia Art Gallery, featuring five New Orleans artists. Finally, the husband-and-wife artists James Esber and Jane Fine, who work together as J. Fiber, are having a one-month residency here, and they’re having the first exhibition at the old Wesley United Church starting December 12.

You’ve said that you hope to have an annual arts event.

It’s exciting that people keep coming into New Orleans to help revitalize it.

There are people all over the country who woke up and said, “I want to be in New Orleans.” It’s one of the few cities I know other than New York where that’s really true. And a lot of the artists who came to New Orleans to participate in Prospect.1 feel in love with the city and are continuing their connection to it.

For more information about Prospect.1.5, which runs through February 19, go to prospectneworleans.org.

131
previous Love, Love Them Do
next The Illustrated Man