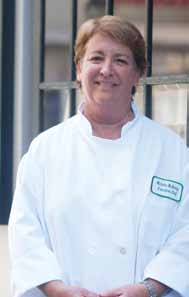 The eighties produced a lot of things: bad pop music, Nintendo, MTV and Mr. B’s Bistro on Royal Street. All things considered, one heck of a decade. Anyone who has been to Mr. B’s knows that it rivals any restaurant in town, and we should thank God that Ralph Brennan knows what he knows. He has given us a consistently outstanding place to eat, drink and absorb Creole-ness for decades. And if you’ve had the world-famous barbecue shrimp, then you’ve experienced the tantalizing combination of butter and Worcestershire that Michelle McRaney, the cxecutive chef at Mr. B’s Bistro, prepares for you. It is so delightfully decadent, it should be served with a cardiologist. She commands and directs the kitchen with exemplary culinary and business prowess, and her roux is as rich in color and feel as her dining room. Here, McRaney takes some time out from running this bustling restaurant to tell us a bit about herself.

What inspired you to become a chef?
The love of cooking and being creative.

What do you most often cook at home?
Not much! We really like to grill outdoors.

What does the Gulf mean to you?
The Gulf is such a precious resource for many reasons, and it breaks my heart about what’s going on.

What was your most memorable meal?
Any meal with my husband, Jerry, and son, Ethan, especially now that Ethan is older and meals with him are rare.

What is your earliest memory of food?
Sitting on a step stool in my mother’s kitchen. It was there that my passion for food was inspired.

What is your favorite comfort food?
M & M’s!

In a large skillet, combine shrimp, Worcestershire, lemon juice, black peppers, Creole seasoning and garlic and cook over moderately high heat until shrimp turn pink, about 1 minute on each side. Reduce heat to moderate and stir in butter, a few cubes at a time, stirring constantly and adding more only when butter is melted. Remove skillet from heat. Place shrimp in a bowl and pour sauce over top. Serve with French bread for dipping.

Serves 2 as an entrée or 4 as an appetizer