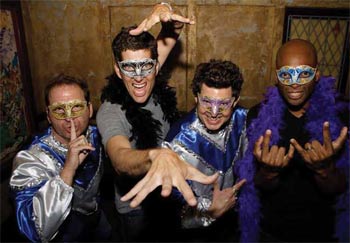 New Orleans–based rock band Better Than Ezra has been in the music scene for more than 20 years. Formed in 1988, when all four members were students at LSU, the band found quick success after releasing their first album, Deluxe. Their hits include “Good,” “Desperately Wanting” and “King of New Orleans.” Since the nineties, Better Than Ezra has kept busy touring and recording, and one of their recent songs, “Breathless,” was covered by Taylor Swift at the Hope for Haiti Now telethon.

Better Than Ezra’s Road to Mardi Gras Tour is visiting major cities across the United States, and the grand finale will be celebrated in New Orleans with the inaugural Krewe of Rocckus event, a three-day weekend full of shows and dinners that will take place during the final weekend of Carnival. Fans will get to experience Mardi Gras with Better Than Ezra as their host.

Better Than Ezra’s lead singer and guitarist, Kevin Griffin, took some time to talk to New Orleans Living about the band’s present tour and future plans.

How is your tour going so far? I know that you played in D.C. last night and Boston is tonight.

Boston is where we had our first shows, so we have a lot of friends here from the past, and last night in D.C. was packed and great. I think that there are a lot of Southerners that went to schools where we used to play who all kind of migrated to D.C., and so they come out en masse.

What is Krewe of Rocckus, and how did it come about?

We always talked about what kind of event we could do to showcase the city. In the past 10 years there have been a lot of music cruises, and we said, “Let’s treat New Orleans as an on-land cruise ship, since the French Quarter, casino and downtown area is so concentrated that you can walk everywhere.” We really got serious about it last year with a branded event with Better Than Ezra as the host and the Krewe of Rocckus, for obvious reasons. People in their late 20s and 30s don’t always want to come down for Mardi Gras now, but this can show them a more local experience for Mardi Gras without all the craziness of the French Quarter. This will show everyone some music and history that the locals experience and what makes Mardi Gras great. We will do it year after year, and now we are on our Road to Mardi Gras Tour.

Who else is playing your events over Mardi Gras?

That Friday night is going to be Pat Green, who is a big country guy out of Texas. He plays a lot of the same places that we do, but he draws a different audience. We thought that it would be nice to have a different genre of music with us playing the events. Also, Big Sam’s Funky Nation and other local acts at Michoud’s, with private viewing stands and open bar and food for Hermes and Endymion. It’s a music lover’s trip to Mardi Gras. Like Jazz Fest is for music lovers, and it will continue to help the tourism here in New Orleans.

What else is the band working on?

We are working on an album now for next summer that is about a third of the way through, and we’re excited that major labels are knocking on our doors again, when they haven’t been looking for us and we haven’t been looking for them. Now with the success of older bands coming up with a hit song, they can be successful and the label doesn’t have to be saddled with the cost of developing an artist. I wrote a couple songs for the new Sugarland album. One song, “Stuck Like Glue” was number one for two weeks, which also helps Better Than Ezra.

Do you feel that your guitar playing has progressed over time?

I tell you what, with the amount of time I spend playing guitar, I should be a virtuoso. It’s funny you ask that because I want to start taking lessons again. There are certain types of lead things that I would like to learn how to play. I consider myself a songwriter that plays guitar. I would like to get better at some of that Delta blues finger-picking stuff.

What do you do in the downtime when you’re touring?

I have a lot of friends in New York, so I will see them and do some Christmas shopping since we have four days before the show in New Jersey at the Stone Pony. I try to explore the cities and museums and that kind of stuff.

Tell me where the band’s name came from.

We don’t tell anybody. It’s our only gimmick.

What will you be doing in five years?

Living in Nashville and producing more. I am presently moving my family from L.A. to Nashville. I just produced a bunch of tracks on James Blunt’s new album. I started playing music when I was young, and I want to be spreading the good word through music when I am an old guy and keep having fun.

Rolling into Asbury Park next week I bet you will be doing a Springsteen song.

We will be doing a Springsteen song. One of my favorites is “Growing Up” from Greetings From Asbury Park. I like that era of his songwriting.