The Better Port of Winter

Warm up with a glass of Portugal’s finest 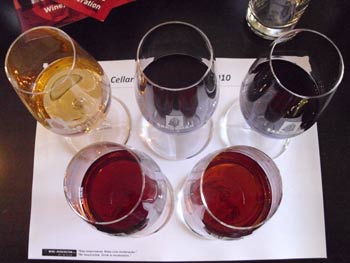 When the temperature dips below 50 degrees (that’s down right cold in this Southern girl’s book!), some grab for their favorite cozy blanket and fuzzy slippers to ward off Jack Frost, while others opt to snuggle up in front of a toasty, roaring fire. I, however, prefer to warm my body from the inside out, by sipping a luscious and comforting glass of port, the heavenly, fortified wine made exclusively in Portugal’s Douro Valley.

It is widely believed that port was created quite by accident during the 1700’s when the war between Britain and France halted French imports to wine-loving Englishmen. Unwilling to give up their fine-wine consumption, the English found an alternative wine source in their Portuguese ally and began to rely on them for their wine supply. The harsh, tannic still wine, however, did not fare very well during the extensive boat trip from Portugal to England, so brandy was added to the wine barrels to help stabilize the wine. Despite the fact that those early offerings were not of the highest quality, British wine drinkers tossed in a lemon and lapped up glass after glass. Eventually port was refined and today is one of the most collectible of all wines.

Last September, I had the good fortune (thanks to my best friend, Glen) to travel to Portugal, a trip I had dreamed about for years. We began our journey in Lisbon, which is a charming, bustling city, but not until we had navigated our way into Porto was I truly tickled beyond belief. With the Douro River trickling through the picturesque, historic town, Porto boasts grandiose churches and Baroque-style mansions, Parisian-esque plazas, hillside-perched cafés and of course Port quintas, vineyards that majestically line the bank beckoning you with their towering, brightly lit signs. The moment after we checked into our hotel, we hopped in a taxi and traveled downhill across the magnificent Dom Luís I Bridge, which was engineered by a protégé of Alexandre Gustave Eiffel, to the epicenter of port heaven.

We began our visit at Sandeman, one of the most revered quintas, where we had a prearranged private tour and tasting. Our delightful hostesses (one of which was clad in a Portuguese student’s black cape and wide-brimmed hat) guided us throughout the well-illustrated and interesting history of Sandeman Port, showcasing everything from historic artifacts to the evolution of Sandeman’s iconic mascot, the Don. Upon completing our tour, we sat down to a fabulous tasting of Sandeman’s scrumptious ports, including tawnies, late bottled vintage (LBV), ruby and vintage. Unlike most other wine regions, the houses in Porto are conveniently lined up one after another, making it quite easy (almost too easy!) to visit quinta upon quinta, sipping this luscious libation. Unfortunately, our time was limited, but my travel mate, who is not necessarily the biggest port fan, was as fascinated with this captivating city as I was, so we promised to return very soon to pick up where we left off—enthralled by the city’s charm and beauty and intoxicated by her prized perfume: port.

Selecting port can be challenging and confusing, with types ranging from simple everyday ruby to complex vintage ports, from fruity white port to rich tawnies and styles varying from quinta to quinta. Like Champagne, true port is produced exclusively in Porto, although fortified wines are made in many other wine-producing regions worldwide. There are five major indigenous grape varieties grown in the Douro Valley used to make port, however, more than 50 less common varieties can be added to the blend. The grapes are allowed to hang on the vine until the fall, when they reach the appropriate sugar level. They are then crushed and given a rather short fermentation period, 36 to 48 hours, after which high-proof brandy is added to stop the fermentation process, thus fortifying the wine. After fermentation is complete, the sweetened juice is transported to “lodges” where it ages in large oak casks called pipes. At this point, the wine can go in one of two directions that will determine its ultimate style: wood or bottle-aged.

Tawny Port: A blend of several different years, the wine generally spends a minimum of six years in barrel. The color fades to a golden-orange-tinged hue and flavors of toffee, vanilla, orange peel and nuts begin to emerge. It is typically served lightly chilled.

Aged Tawny Port (10, 20, 30 or 40 years old): These excellent ports take on a classic amber hue as a result of many years (indicated on the label) of aging in cask. Elegant and refined, they tend to exhibit nutty, caramel-like characteristics and are most often served slightly chilled.

Colheita: This single-vintage tawny is quite rare and its quality can rival vintage port.

White Port: Less common than ruby port, it is sweet, fruit-driven and delightful when served chilled as an aperitif.

Ruby Port: A blend of several vintages, these are the most basic and least expensive of all red ports. They are intended for immediate consumption and often indicate the “house style.”

Vintage Character Port: These are blends of ports of different vintages that are usually bottled when they are four to five years old. They reflect the house style and are full, rich and supple.

Late-Bottled Vintage: These single-vintage ports are usually produced during declared vintage years but are bottled four to six years after harvest, then aged in bottle for an extra four to six years, so they are ready to be consumed earlier than vintage port. They are higher in quality (and price) than ruby and vintage character ports and are most enjoyed when decanted.

Crusted Port: Named for the sediment or “crust” that forms in the bottle, this port ages generally for three to four years in bottle. Crusted ports are a blend of excellent years and are a fine alternative to pricy vintage ports. Decanting will make these ports more enjoyable.

Single Quinta?Vintage Port: Produced solely from wine from a single estate from one vintage. Bottled after two years in barrel, they are typically allowed to mature in bottle and can be exceptional in quality. Less expensive than vintage port, they can be consumed younger and generally do not have to be decanted.

Vintage Port: The crème de la crème of port. A vintage is declared only in exceptional years, about only two or three years per decade. The wine is aged for two to two and half years in wood barrels before being bottled, unfiltered. Hailing from only the best sites, this powerful, intense port has extraordinary aging potential, as much as several decades and can fetch top dollar.

190
previous Bust Out the Bubbles
next Cut-rate Reds