Raise for the Cure 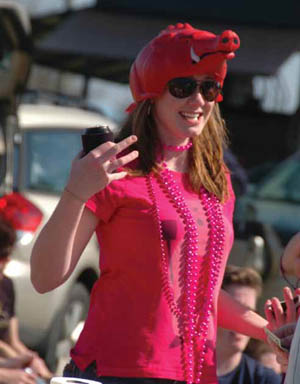 Hogs for the Cause began in 2009 when childhood friends Rene Louapre and Becker Hall decided to raise money for a young boy suffering from brain cancer. Now in its third year, it’s become a major event with more than 25 teams competing in a pork cook-off and a full day of music from groups that include the Radiators, Anders Osborne and the Gourds (the Austin, Texas, band famous for their cover of Snoop Dogg’s “Gin and Juice”). Louapre spoke to New Orleans Living about the future plans of Hogs for the Cause and the boy who inspired the event, Ben Sarrat Jr.

Is it true that Hogs for the Cause started as an afternoon barbecue?

Yeah. About six months after I had moved back to New Orleans, Becker said, “Do you know how to roast a hog?” I’d seen it done. You put a hog over wood with charcoal, you drink beer for twelve hours, and you come back and it’s cooked, right? So he said, “Let’s get all of our friends up on the Fly and do a hog roast.”

How did a pig roast on the Fly become a major charitable event?

Around that same time in 2009, there was a benefit dinner at LaCôte Brasserie for Ben Sarrat Jr. His dad is a chef there with Chuck Subra, and his aunt is a partner with my dad in a medical practice. Ben was diagnosed with diffuse intrinsic pontine glioma, or DIPG, which is a tumor that attaches itself to the stem of the brain. It’s rare and only really affects young children. So Becker and I were talking more about the pig roast, and he said let’s do something charitable. The first year we roasted a pig, we got some oysters from Acme, and we got some kegs from NOLA Brewing. We invited everybody we knew and let people donate whatever they wanted. We probably had about 200 to 300 people, and we raised about $10,000 for the Sarrats.

And now Hogs for the Cause is an all-day festival at City Park. How did that happen?

We really didn’t have an idea of what it was going to be. Ben was diagnosed in November of 2008, around his fifth birthday. When we had the first Hogs for the Cause in 2009, he was on his Make-a-Wish trip to Disney World. He passed away about a week before the event in 2010. There is no cure for this disease. Trying to figure out what to do, we realized there was tremendous need for support services. When the families, for example, have to fly to Houston, they need to pay for meals and for hotels. So we decided to help families with children who have pediatric brain cancers.

How much money have you raised so far?

We raised around $27,000 last year, our second year, and we established an endowment fund. Last year about 2,500 came, which we didn’t expect. It was a big event. The reason it grew was we decided to expand Hogs for the Cause to a pork cook-off with teams. If you invite 10 people to a party and tell them to all invite 10 more people, that multiplies. This year we’re estimating between 5,000 and 10,000. But if it’s one of those perfect, New Orleans spring days, then who knows.

Will Hogs for the Cause keep growing?

This is a key year. We added live music, and we have to charge admission. If we lose money, then we’ll scale it back and figure out where to go. But City Park is so excited to have us. They want a springtime festival that would eventually go into the festival park that they’re building.

You’re a busy man. You run the popular food blog Blackened Out, you write for OffBeat Magazine, you just launched the pop-up restaurant Most Valuable Burger and you have a “real job” as an attorney. Why is it important for you to make time for this cause?

Both Becker and I went to Jesuit high school. It was drilled into us to take care of other people when you can. And Ben was such an incredible boy. We met him and said, “What more can we do.”

What do you tell the teams in the cook-off about Ben?

We’ve named the competition after him. In the rulebook it discusses Ben and why we’re doing this. The fundraising portion is with him in mind: each team has four hours to fill their “piggy bank” with as much money as they can. They can give out pork samples, have raffles, basically do whatever they want to raise money. I think competitors fell in love with the event because it has such a good purpose. DIPG is a serious subject. But we’ve always tried—and the Sarrats have been good about this—to keep Hogs for the Cause lighthearted. If we can give the competitors that infectious fever to do something good, it spreads. That’s a cool thing to watch.

Hogs for the Cause takes place March 26 in City Park near the rugby fields (intersection of Zachary Taylor Drive and Magnolia Drive). Gates open at 11 a.m. and the Radiators are scheduled to perform at 8:30 p.m. Tickets are $10 online and $15 at the door. To purchase tickets or for more information, visit hogsforthecause.org.

276
previous Food for Thought
next Tuning In