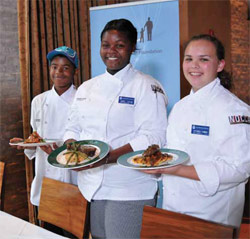 On television, Emeril Lagasse has a bold and boisterous personality that
makes him impossible to ignore. When it comes to his charitable work,
the chef takes a quieter approach. Not all of his fans know that since
2002 the Emeril Lagasse Foundation has given away $4 million, with
95 percent of funds supporting organizations in Louisiana and the Gulf
Coast. In New Orleans, the foundation focuses on the Edible Schoolyard,
which integrates gardening and nutrition into a K–8 curriculum, the
new culinary arts program at the New Orleans Center for Creative Arts
and the job-training program for disadvantaged youth at Café Reconcile.
Executive director Kristin Shannon spoke to New Orleans Living magazine
about the foundation’s origins and future plans.

Why did Emeril decide to create a foundation?
When you’re a restaurateur like Emeril, you naturally reach out to the
community. Then when he got into TV, he was asked to do even more
charitable work. But he didn’t always know where that effort and money
went once he left. The Emeril Lagasse Foundation was a way for him to
channel his charitable energies and see that his funding and help were
making a change.

What is the foundation’s main focus?
We started out with education being a priority. At all different ages,
there were different needs that we saw. An important part of early
childhood education that we saw lacking was nutrition, both nutritionbased
education and what the kids were eating in school. So we pride
ourselves on giving to organizations who target the K through eighth
grades, particularly the Edible Schoolyard. As the younger kids turn into
teenagers, we were concerned about life-skills development and culinary
training, so we worked with NOCCA to found a culinary program for the
high school age. And then you have the Café Reconcile audience, that 16-
to 21-year-old range. These are kids who may have dropped out of school,
gotten their GEDs and are trying to get into culinary as a career path.

What have you been able to do for the Edible Schoolyard?
The Emeril Lagasse Foundation funded the outdoor classroom. That was
significant, because the outdoor classroom became a visual statement. At
the time the school was trying to get people interested, but they only had
these small planting boxes. It was hard for people to understand their
vision. As the garden started growing around the outdoor classroom, it
brought other funders in. The next thing they wanted was a teaching
kitchen. That was crucial. You can teach a kid where food comes from,
but if you can’t take them to the kitchen, cut up the food and cook it the
way they like it, then it’s kind of a moot point. We’ve also funded some of
the school’s advocacy work. We want to see this program grow. We don’t
want it to be at just one school.

How did your collaboration with NOCCA come about?
NOCCA had been interested in adding culinary arts, but they didn’t
know where to start. We went in and suggested the summer pilot
program. And we suggested approaching the Johnson and Wales culinary
school, Emeril’s alma mater, to develop the curriculum. We had our
fourth summer program this past summer. NOCCA will introduce
culinary classes during the school year in the fall of 2011.

Is there anything else in the nation like the planned culinary program at
NOCCA?
No, it’s unique to be in an arts conservatory and to be studying
culinary arts. Right next door you’ll have singers, musicians or a theater
group working. I would love for it to become a model for other arts
conservatories.

What kind of training will the students receive?
It will prepare high school students who go to culinary school to be two
or three years ahead. They’ll have the basic skills and really be able to
advance.

Café Reconcile is a well-established program. How will Emeril’s
involvement help it expand?
We’ve always urged them to bring in more kids. To us, that’s the most
important thing. They are at capacity. They have a waiting list and are
constantly turning kids down. We also helped them envision a second
floor with a demonstration area and a teaching kitchen. We want to
elevate the experience and environment so that the students feel like
they’re in a classroom space.

It sounds as if the Emeril Lagasse Foundation takes a hands-on
approach to the programs it funds.
We’re not going to say, “Here you go,” and then walk away. Emeril doesn’t
do that in his kitchen either. He doesn’t walk up to a cook, say, “That’s
not the way you do it,” and then walk away and never go back. He takes
great pride in following through. It’s neat to see how chef Emeril inspires
his own staff, and that’s what we see happening now with these young
kids. The foundation’s philosophy is built around the values of Emeril’s
whole business, which are mentoring, staying involved and being loyal.

For more information about the Emeril Lagasse Foundation, visit emeril.org.

247
previous Rapid Recovery
next Raise for the Cure