Home SPORTS How Sweet It Is
SPORTS
February 14, 2011 Paul Wegmann 0

How Sweet It Is

The Sugar Bowl continues to thrive in New Orleans 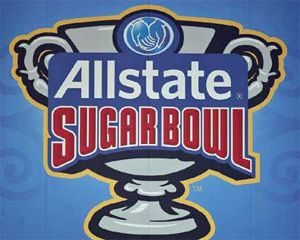 New Orleans is a place
where people can go to
feel the past, to see lessons
for the future and most
especially to get lost in the
moment. The city opens
her arms for all travelers
every year for the Sugar
Bowl, where the past,
present and future come
together for those willing
to look. This past January,
fans from Ohio State and
Arkansas converged for
a classic intersectional
matchup, and the results
did not disappoint, as the
Ohio State Buckeyes eked
out a surprising 31–26 win
over the SEC’s vaunted
Arkansas Razorbacks.

The 77 years’ worth of
tradition was personified in the man leading the
ESPN Sugar Bowl broadcast team in the booth
this year, Todd Blackledge. As a player in the
1983 Sugar Bowl, he also led Penn State’s first
championship team to victory over Alabama
and its legendary coach Bear Bryant in only the
sixth No. 1 vs. No. 2 matchup witnessed until
that time. As such, it became a harbinger of the
future, the annual BCS championship game that
today is a regular feature of college football. In a
recent interview, Blackledge discussed some of
the changes and similarities in the game.

In 1983, the game was played on January 1,
whereas today it is typically played a week
later to fit into the staggered BCS televisionoriented
bowl schedule. And until 2004, with
a few exceptions, it had always been on New
Year’s Day. At its founding in 1936, the game
was created as a holiday destination for those
seeking escape from the snow and cold of other
climes, while also providing New Orleans with
a much-needed off-season dose of business for
its nascent tourism industry. It would surprise
some people today to learn it was at that time
expected to provide Tulane’s then highly rated
football team a big bowl showcase, though of
course that led to a yearly tie-in with the SEC
and championship football.

Blackledge recalls his team having a serious
mindset, the kind befitting expectations,
and indeed it became, a game of historic
proportions. Thus on their very first day in
town, the Nittany Lions took perhaps their
single (apparently sober) stroll down Bourbon
Street, absorbed the atmosphere—so different
from what many players were used to in their
hometowns—and then turned to focusing on
the game at hand. “We were there for business,”
Blackledge says. Probably like many of the fans,
Blackledge first remembers the fine weather, the
kind that allows one to wear shorts during late
December, but also the excitement surrounding
the game.

“I love bowl games, and a big part of that comes
from my own personal experience of having
gone to four during my time at Penn State.
We just enjoyed the different feeling from the
regular season, the different routine, the fun
things you got to do, and the things the bowl
did for you. It was and is a great experience
for the players, and that still exists. That’s part
of what makes bowl games special. There are
volunteers, people who work for the bowl and
their committees year-round who work to make
it a great experience—from the parades, the
events they have with both teams present, things
like the Sugar Bowl gala—cities like New Orleans
have unique, distinct features. In New Orleans,
they are used to creating a big-event feel, like
a big party, and they are very comfortable
with that. Hosting a big game like Ohio State
versus Arkansas is right in their wheelhouse;
as a city and community, they know how to
do it. They have hosted Super Bowls, national
championships, Final Fours, and because of
the restaurants, the flavors and the uniqueness
of the city, it just lends itself to that big game atmosphere.”

The Sugar Bowl was “very
special” for Blackledge
as a player and his Penn
State team, because though
the Nittany Lions had
been “unofficial” national
champions before, in 1968,
1969 and 1973, they had
never maneuvered themselves
into the official top spot in
the major polls. Recalling the
atmosphere, Blackledge says,
“I remember it being really,
really special: loud, the colors,
the sounds of our band and
of Georgia’s band, the distinct
uniform differences, and I
remember after the game, just
wanting to linger on the field,
and not wanting to be in a
hurry to leave.”

The game itself was one of the greatest
championships in college football history,
as Blackledge sealed what had seemed like a
nervously close game with a deciding 47-yard
touchdown bomb down the left sideline to a
diving Gregg Garrity, while Penn State’s great
running back Curt Warner outdueled Herschel
Walker for a 27–23 final win. The Blackledge-
Garrity connection remains one of the greatest
plays in college football history.

But what happened after the game perhaps
best demonstrates the changes in the big
business that is now college football, with the
media and public circus that surround today’s
championship finales: “Gregg Garrity, who
caught the winning touchdown, and I were the
last two guys to leave the locker room at the end
of the game. We had been savoring the moment,
and we walked out of the Superdome and the
buses had all left to go back to the hotel, and we
didn’t have a ride back, so we started walking—
he had the game ball, I had the MVP trophy—
and we got picked up by a guy in a van who was
a football fan from Tennessee, and he gave us a
ride back to our hotel!”

In an age of Game Day hype and wall-to-wall
coverage, with the drums of publicity constantly
beating and the eyes of cameras everywhere, it is
hard to imagine such a thing happening today.
Nevertheless, today’s players and fans always
take home their own rich memories from
New Orleans.

116
previous Finish Strong
next The Hornets’ Future is Now