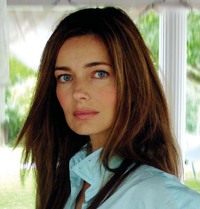 Growing up, Paulina Porizkova never thought of becoming the world’s top supermodel. As a young girl born in Czechoslovakia and living as a political refugee in Sweden, that kind of glamorous career seemed a world away. Porizkova escaped the cruel taunts of her classmates by delving into the works of revered authors such as Dostoevsky, Tolstoy, Austen and Dickens, not even noticing her undeniable budding beauty! Her astounding good looks wouldn’t go unrecognized by others, though. After a friend sent Porizkova’s photo to Elite modeling agency in 1980, head John Casablancas sent the 15-year-old to Paris, where she quickly began her meteoric rise to international sensation in the modeling industry. Porizkova graced magazine covers all over the globe, from Vogue to Sports Illustrated, and scored huge modeling contracts, including the most lucrative one ever at the time, a $6 million-a-year deal to be the face of Estée Lauder Cosmetics. She’s even enjoyed a successful career as an actress in independent films. But underneath the world’s most impossibly gorgeous woman, lurked a bookworm with a burning desire to write.

This year, Porizkova released her debut novel, A Model Summer (Hyperion, $23.95), the absorbing tale of 15-year-old Jirina, a Swedish girl of Czech origin who, after being discovered, finds herself thrust into the wild and woolly fast-paced world of modeling. With this fictional work, Porizkova has proved herself to be an exceptionally gifted writer, crafting a riveting ride through the underbelly of a supposedly glamorous industry, while establishing yet another promising career for herself. New Orleans Living recently caught up with the cool yet outspoken, hilarious yet intelligent author, who had plenty to share with New Orleans, one of her favorite cities in the United States.

Hi, Paulina! You are the most gorgeous woman in the world, but you could have based your entire career around your wit and intellect had you so chosen. You are so underrated!

Oh, thanks, Christine! This is so much good stuff heaped upon me that I don’t even know how to handle it! [Laughs]

I wasn’t surprised that you wound up writing an incredibly enjoyable and engaging novel.

I always knew I would write, but writing isn’t necessarily the most fun thing because you have to lock yourself away in a quiet spot in order to communicate, which is kind of weird in the first place, and it can be kind of painful. I had this story and the character Jirina in my head for a while, but I kept putting it off because I knew once I started, writing would be my life. I gave myself great excuses, like “I don’t have time; I have two small children; I’m still doing movies.” And once I did get serious, I realized I was sadly lacking in the technical aspects of writing!

But your writing is quite eloquent, so it’s wild that English is your third language!

I don’t even know if English is my third or fourth language! [Laughs] To me, writing is about being passionate to want to say something, tell a story, entertain and educate without patronizing. I took classes at the New School in New York, which made me focus. A bunch of us writers started a workshop, and that’s been a fantastic experience.

You have a talent for detailed description, such as when you write about Paris. You really captured the scene and gave your readers a very colorful and transporting journey. Did that come naturally for you?

That came the easiest to me out of all the writing. I’ve lived in Paris and spent much time there, so that just flowed for me. When I was writing about Milan and Morocco, I didn’t know much, so I read travel books and tried to visualize what it looked like. So I might be completely off! [Laughs] Someone who lives there has to tell me if I got it right. 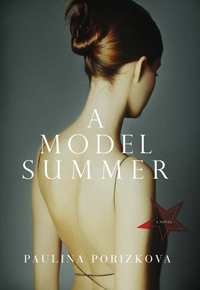 Jirina, your 15-year-old protagonist, a sweet girl from Sweden who suddenly finds herself thrown in the exciting and confusing world of modeling in Paris, is an endearing character. You’ve done a terrific job with your character development.

I wanted to make her character sort of morally sound. Jirina doesn’t care about modeling or clawing her way to the top. That’s a story we’ve heard a million times; just watch one episode of America’s Next Top Model and you’ll have just that. And I think Jirina manages to stay sweet and be herself, but you’ll see how even she can make a mistake.

While this book was written with some personal experiences influencing it, this is a fictional work and not autobiographical?

Exactly. It’s called life experience. People automatically assume I’m writing about myself. In the beginning, I’d get offended by it, because to me, it’s like hold on a moment, I don’t deserve credit for any imagination whatsoever? I’m just going to have to write about my life exactly the way it is? But I realized people couldn’t help it. Had I written about a model from Siberia, it still would be me! So I lent her some of my aspects because these are the things I know about, and I’d understand her psychological profile better, because people are just going to assume it’s me anyway. But if people read it and think it’s me and believe it, I’ve done my work as a fiction writer, because then they’re not questioning the character at all. I got to the truth that I wanted to get to.

This book gives us insight into your terrific wit. Jirina describes a Rolls Royce as looking like a white refrigerator on wheels! You are hilarious!

Thank you! Positive feedback from readers has been the most thrilling thing ever for me. I’ve spoken with friends who were models who said it brought them right back, like a time machine, and they laughed their heads off, and that’s incredibly gratifying to hear. And people who know nothing about modeling say, “Oh, my God! I had no idea girls get treated as though they’re deaf, blind and dumb, and how hard it is for a child to be in that world.” It’s really not a good place for a child.

Your husband, musician Ric Ocasek, said that you may have missed your calling to become a librarian.

Yeah, right! [Laughs] That’s because I’m a manic reader. I so fully inhabit the world of the book that I kind of forget about the real world and I get confused, so my husband jokes, “If your nose is in a book, the world could destruct and you wouldn’t notice!” As a kid, my mother fed me chicken soup that she mistakenly put sugar in instead of salt, and I was sick so I was eating in my room, reading a good book, and I ate the whole bowl without realizing it, while the rest of the family gagged at the kitchen table!

Your marriage is a long and successful one in celebrity land. You guys are the coolest couple out there. And the sexiest!

Well, thank you! I have to say, the guys that are conventionally good-looking in their 20s and 30s don’t always age so well. Ric looks exactly the same. He’s the best aging man in the world, and I’m like, “Ha, ha!” He looks exactly the same! I still love my husband madly, and I’m very proud of our relationship, mostly because we both invest a lot of work into our marriage.

You were a celebrity dancer on the past season of ABC’s “Dancing With the Stars.” I quit watching it when you got eliminated after the first show. You were graceful and elegant as a dancer. You got gypped!

Thank you! I had a fantastic time on the show. I don’t regret a single moment of it. I wasn’t surprised, unfortunately. I knew I danced well and Shandi [Finnessey] did too, but the pretty ones went first, and that’s the way it goes! Regardless of our dancing abilities, pretty people don’t deserve votes because they have prettiness, so what the hell do they need anything else for?

You must have experienced this attitude plenty throughout your career.

I sure have! I’m used to people not really caring about what I say or do other than just looking good. What’s hurt me the most is when I’ve mentioned in interviews how hard my teenage years were, because I was very seriously bullied, mobbed and beaten up by my classmates, and the typical response is “Oh, God, I feel so sorry for you!” It’s like they laugh. As though my pain should be dismissed because I won the physical lottery. I’m intrigued as to why people are so convinced that beauty is such a major lottery ticket. And you do nothing to get it! When I was 20, on the cover of every magazine, they just wanted to look at me. They didn’t want me to speak, and they’d be slightly disturbed if I spoke, maybe because I didn’t say what they wanted to hear. People who pay attention to me now do so because of what I say. And that’s kind of nice.

What else is nice is that you’re a tremendous fan of New Orleans!

It’s my favorite city in the United States. As a European, the first time my husband took me there, I was like, “Oh, my God!” I felt like I recognized everything. It’s definitely the most European city in the States; everything about it is so fantastic! We’d rent bikes and bike up to Tulane and back, taking in the surroundings. We’d visit on every single anniversary of ours, but it’s gotten harder to pick up and go with two kids. And I really miss it. By the way, how are things in New Orleans? What’s the spirit like there?

I think the people here now are mostly diehards. People want to see their hometown come back stronger than ever for sure. Weare hanging in there!

People are passionate about their cities. Loads of people left New York after 9/11. Those of us that stayed felt even more like New Yorkers. The generosity and the way New Yorkers bonded together to heal was spectacular; it made us even more in love with our city. I’m dying to come back to New Orleans and take my children because they are total history buffs, and I think they’d really enjoy it. My little one, Oliver, who’s 9, is really into the Phantom of the Opera and loves spooky, gothic-y, Victorian things. He’d love all those museum-type houses in the French Quarter.

Definitely! And I should make my son Jonathan, who’s 14, read Interview With the Vampire before we visit. Then he can get into the whole mystical New Orleans thing. There’s just something about New Orleans that’s intense—the weight of history, the past lives that lived. If you’re sensitive to that kind of energy, you can’t help but be inspired by New Orleans.

Oh, Commander’s Palace! And we’d go to Brennan’s for brunch on Sundays. What a fabulous tradition! And of course, Café Du Monde, at least once a day. And that was on top of breakfast, lunch and dinner!

You need to come back to New Orleans soon. And you need to write more books!

I’ve toyed with renting a house in New Orleans and writing there. It’s such a conducive place for going inside of your brain. I’m brewing my next book in my head right now. I know now that what will drive you to finish it is that you have something to say. The need to be heard is what really propels you.