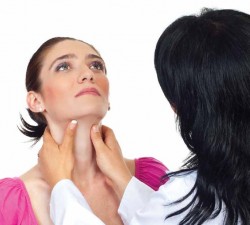 The thyroid plays an important role in general health, even though it is not usually talked about. “The thyroid gland is a gland in your neck, shaped like a butterfly, right above your collarbone, and its job is to make thyroid hormone, which essentially controls your metabolism or how your body stores and uses energy,” said Dr. Brandy Panunti, endocrinologist at Ochsner Health System in New Orleans.

The two most common thyroid disorders are under and overactive thyroid. Because the symptoms are so non-specific, doctors rely on a blood test to give a definitive diagnosis. The outcome varies.

“What happens depends on how severe the problem is,” said Dr. Tina Thethi, endocrinologist at Tulane Medical Center in New Orleans. Overactive thyroid is known as hyperthyroidism. “The thyroid gland produces too much thyroid hormone and the body’s metabolism is increased,” said Dr. Meredith Maxwell, family medicine doctor at Crescent City Physicians in New Orleans. The disorder is clear-cut and easy to identify.

Said Thethi, “A simple way of putting it is that you are in fast forward mode.”

The most common cause is Grave’s disease. “In Grave’s disease, one of the pathognomonic signs is when one or both of the eyes start bulging out,” said Thethi.

It is important to understand what is happening in the body in people with hyperthyroidism. “The immune system in certain people’s bodies produces antibodies that stimulate the thyroid gland to overproduce the hormone,” said Maxwell. This causes obvious symptoms. “People have anxiety, trouble sleeping, weakness, fatigue, irregular heartbeat, sweating, weight loss despite having normal appetite, frequent bowel movements and irregular menstrual periods.”

For overactive thyroid, medications are used to calm down the thyroid gland or destroy it. Once you are on the medication, you are on it for life, because hyperthyroidism is not something that suddenly gets better. Radiation or surgery can also be used to treat hyperthyroidism. It is a condition that should not be ignored. “You can have danger because it can work your heart hard,” said Maxwell. Underactive thyroid is known as hypothyroidism. “The thyroid gland does not produce enough hormones and the body’s metabolism is decreased,” said Maxwell.

It too is easy to identify in most cases. “The simplest way of explaining it is that you are in slow motion mode,” said Thethi.

Hypothyroidism has different causes. “Postpartum, or if you just had a baby, it can cause thyroiditis and there are other types that are caused by a virus, which can cause a painful, tender thyroid,” said Maxwell. If you are overmedicated for hyperthyroidism, you can also present with these symptoms. “About 95 percent of cases of hypothyroidism are just problems with the thyroid gland itself called primary hypothyroidism and the symptoms are similar to many of the normal changes of aging, like slow metabolism, fatigue, sluggishness, weight gain, sensitivity to cold temperatures, hair loss, swelling around the eyes, slowed heart rate, shortness of breath, constipation and menstrual cycle irregularities,” said Maxwell. Some people can have hypothyroidism without symptoms, which is called subclinical hypothyroidism.

For an underactive thyroid, thyroid hormone replacement is given. “Synthroid or Levithroid are given and dosed based on weight and then you test the thyroid function six weeks later and adjust it from there,” said Maxwell. Usually you can see dramatic changes in the symptoms. Doctors are also trying to diagnose hypothyroidism earlier than they did in the past. “All newborns in the United States are tested and routinely screened for hypothyroidism because it can cause some devastating effects,” said Maxwell. It is important to establish a relationship with a primary care doctor.

“If you are at risk for developing underactive thyroid, you should have it checked periodically,” said Panunti. The most important times to check are before and during pregnancy because autoimmune thyroid disease can be associated with complications or miscarriage. It is important to know your baseline and what is normal for you, and if you experience any changes, notify your doctor.

A lot of people hear the term “goiter” but few actually know what it is. “It means that your thyroid is enlarged but does not tell you anything about its function,” said Panunti.

Sometimes goiters run in a family but other times, they can happen because of iodine deficiency, which is both preventable and treatable. “You can give the person iodine and it will shrink the goiter or if you have overactive thyroid, you can treat it with medical therapy or radioactive iodine and it will shrink it,” said Panunti. Underactive thyroid can cause a goiter but when you give patients what they are not making, which is the thyroid hormone, the treatment will shrink it.

Thyroid nodules are common. “If you were to feel people’s necks, you would probably find that you could feel a nodule on 5 percent of people, especially as they get older,” said Panunti. They are generally benign growths. “If I were to ultrasound, which is probably the best way to image the thyroid gland, and looked at everybody, we would find that up to 50 percent of people over the age of 50 have thyroid nodules,” said Panunti. Less than 10 percent turn out to be thyroid cancer. If someone has a nodule, doctors can check the thyroid-stimulating hormone using a lab test. After, an ultrasound is done to assess the nodule and see how big it is, if there is calcium in it, what the blood supply looks like going to it and then a biopsy would be done.

A rarer condition is thyroid cancer. “If there is a thyroid nodule that we either feel on an examination or see on an ultrasound or CAT scan, we look at the nodule to look at the features, like how big it is, and then do the biopsy,” said Thethi.

There is an alternative. “The other option is to take the nodule out and look at it under the microscope for a diagnosis,” said Thethi. People do not always know the signs of thyroid cancer. “Signs are feeling the lower part of your neck has enlarged or your eyes are bulging, but if you have a family history of thyroid disease, you should be vigilant and same if there is any chance exposure to large amounts of nuclear radiation.”

One of the most controversial topics endocrinologists deal with as specialists is the debate over the right way to treat patients using thyroid hormone. “There is controversy out there about using T4, which is the regular thyroid hormone versus more natural preparations versus a combination of T4 and T3,” said Panunti.

The majority of what the thyroid makes is T4, which is called thyroid hormone, and it got its name because it has four iodines stuck together. “The thyroid hormone preparations are very good, dependable and there are generic forms for them so there is no reason someone who needs treatment should not be able to get it,” said Panunti.

Researchers are always looking for newer ways to manipulate the thyroid hormone. “They used to give it a long time ago for weight loss because it revs up the metabolism but they found as soon as you stopped it, the weight comes back,” said Panunti.

The challenge is that there is no real prevention for thyroid issues so the best you can do is take charge of your health. “Thyroid issues can happen to anybody,” said Maxwell.

1.68K
previous 10 Ways to Get Healthy for Spring
next Kidney Health