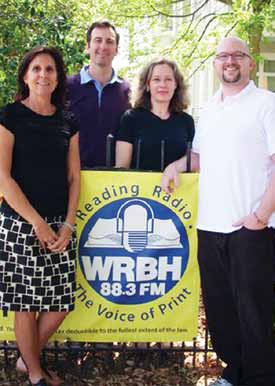 While flipping through the FM dial, you may run across a soothing voice reading the day’s Times- Picayune or a passage from a novel. You’ve found WRBH, a nonprofit station that brings printed material to the blind and visually impaired.

What are the origins of WRBH?

Dr. Robert McClean was a blind math professor at Loyola, and he realized that the information available at the time to the blind or the visually impaired population was always dated, because of how long it took to fabricate Braille material. His population needed to have access to current information. This was 30-odd years ago. Are there similar stations in other cities? There are other reading radio services, but they are sideband radio stations, which means that you need a special piece of equipment to pick up the signal. New Orleans has the only FM reading service in the country. I think that’s awesome.

Has the type of material you read changed over the years?

When the station started, we just read the newspaper. Now we’re a 24/7 station, a change that happened probably 20 years ago. We like to read the gamut. We read the Left. We read the Right. We don’t edit. We read fiction and non-fiction. We read a myriad of magazines, from Oprah to Time.

Who does the reading?

Everyone is a volunteer. We only ask for an hour a week.

What attracts them to reading?

I think there is a bit of ego involved. There is an audition. We don’t just take anybody. We have the British invasion, but we also have what I fondly call the y’at element. Every parish is represented. It’s truly a microcosm of New Orleans.

What percentage of your listeners are blind?

What happened to the station after Katrina?

I was working here prior to Katrina, but I was doing development. Two weeks before landfall, I was asked if I would consider stepping in as executive director for a trial period. My day of training was going to be the Monday after Katrina hit. I knew that the transmitter building in Chalmette was off its foundation, there was 10 feet of water in it and the transmitter was destroyed. I thought, I can’t do this. Fortunately, my kids were all in college, so I could come back when they opened the 70115 area. My husband and I came to WRBH (on Magazine Street in Uptown) to clean out the refrigerator, and the front door was papered with notes from volunteers. That’s when I knew what I had to do. Three days later we were physically back in this building, which sustained only minor roof damaged. The tower was done, but we have a small tower in the backyard that is a cell phone tower. We actually broadcast from the small tower in our backyard seven weeks after landfall.

We have the Chef’s Show, the Writer’s Forum, Public Affairs and now we’re broadcasting the Metropolitan opera. The Chef Show has quite a following, and that’s largely due to host Mary Sonnier. She’s a wonderful host and she knows everybody.

Tell me about your recent outreach to the city’s Haitian population?

The newest show is La Voix d’Haiti. Joel Vilmenay, who is the general manager of WDSU, approached me several months ago to ask how I felt about doing a show for the Haitian population. I thought it was an excellent idea. Outreach to the community is important to us. Lord knows the Haitian community has gone through a lot, and the story continues.

What’s on the horizon for WRBH?

I’m looking at a music show, because New Orleans is a music town. We are probably going to form a relationship with Jesuit high school to broadcast some of their games. We used to broadcast Tulane baseball, which was a revenue stream for us. And we lost that. Last year was a little bit difficult because of that. We may do other things with Jesuit, like broadcast some of their Masses. It’s all about outreach. I sometimes think that not enough people know about WRBH. We’re like the best kept little secret in New Orleans.

On May 6, WRBH will hold its 7th Annual Pat Brown Golf Tournament, named in honor of the champion blind golfer and New Orleans resident. WRBH can be found at 88.3 FM. For information about the station or the tournament, visit www.wrbh.org.