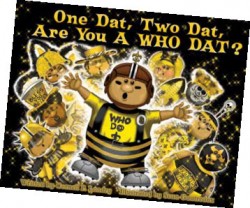 As Armageddon approaches the American sports world in the form of the looming NFL lockout, the local sports fan becomes hardened by the cynical awareness that today’s professional sport is solely about money, advertising and ego. The memories of last year’s Saints’ Super Bowl victory replete with images of Drew Brees held aloft on Bacchus’ cup and Tracy Porter holding the winning ball aloft like the Lombardi Trophy itself are in danger of being overshadowed by sights of union negotiators declaring an impasse, a grimacing commissioner remorsefully echoing words of pessimism and announcements that the draft, the off season, hot stove transactions and actual kickoffs will all be cancelled pending further notice way, way, way down the road.

For now time stands still. Pro football, part of the heartbeat of this city and country, is on a precipice. It is truly sad because football, and sport, is about far more than dollar signs. Yes, the local economy is facing an impact, as the Saints carry with them tens of millions in dollars and thousands of jobs locally. But the reason all those people come to the games, watch the games and work around the game runs far deeper.

The game has a passion behind it. It is passion that brings people to the game. It is passion that imbues the game with its meaning. It is the fans’ passion that conveys energy on the field, without which the players would have no reason to do what they do. For most, that passion is born in their hearts from when they were children – watching games with their fathers, enshrining players as their first heroes, their first iconic role models from whom they will learn lessons of perseverance, leadership and dramatic winning efforts. Impressions of underdogs, bad guys, storytelling, winning and losing are oftentimes first witnessed at the line of the end zone.

In lieu of engaging in the uglier, crasser side of sports now on display, parents, grandparents, uncles, aunts and siblings alike can reawaken their passion and share it with the young ones in their lives by enjoying two new books recently appearing in local bookstores: One Dat, Two Dat, Are You A Who Dat? (written by Cornell Landry) and A Saintsational Swamp Adventure (written by Ricci Broussard Hebert), both impressively illustrated by local artist Sean Gautreaux. The books could, and maybe should, be bought together because the former begins with the understanding of the team, its connection to the city and the joyful experience of being in that number, while the latter serves as a child’s-eye view of wonderment at the approaching extravaganza that became New Orleans’ super celebration after winning the championship.

One Dat begins with this simple, but moving and very insightful forward, “Our beloved team, who adorns the black and gold, is one of the only teams in the league that is not represented by either a mascot or a person’s name. Our team is represented by a symbol, the fleur de lis. This symbol has represented the great city of New Orleans for nearly 300 years. We Are The Fleur De Lis! We Are The Black And Gold! We Are The Who Dat Nation! No one owns us.” That is quite an opening message for any young reader, but it is true and it also should resonate with any adult who would be reading it along with them. Even the inside cover of “One Dat” is emblazoned with the black and gold fleur de lis flag that has become a modern symbol of the contemporaneous isle of Orleans since the days of the Storm, a statement in itself that the old regional flags no longer represent a very changed local mindset, one of pride, resolve and independence.

One Dat opens with the birth of a baby Saints fan, “Anyman,” who heads down to “a magical place called ‘WhoDatVille’… to become a true member of Who Dat Nation.” Like many tykes he sees himself as perhaps overlooked and he sees in the Saints a kindred spirit, “Both were always the underdog” – a sense that many an Orleanian could relate to. Gautreaux portrays Who Dat Anyman in a remarkable and memorable graphic – a young boy in black-and-old-gold overalls, with a gold “Who [email protected]” shirt, Archie Manning button and a fleur de lis on an old-school leather helmet – thereby creating a sort of modern New Orleanian Charlie Brown, and it would not be surprising to see the local populace adopt its iconography everywhere one day. As he passes through WhoDatVille, Anyman encounters a variety of fans in guises and places familiar to the city’s streetscape – the funky, the outrageous, in the Quarter, in the Dome, the Mardi Gras Indian, a cheerleader, the Jazz Fester, the Zulu paradegoer – and as each asks if he is a Who Dat fan, he replies “I am a fan! A Fan I Am!” In the end, the super krewe of Orleanian chants back to Anyman, “You are a fan, you ‘Fan I Am!’ One Dat! Two Dat! You are a Who Dat!'” Throughout, Landry’s words and Gautreaux’s colorful and memorable images impart not just what it means to be a Saints fan, but also an Orleanian.

A Saintsational Swamp Adventure is a lushly colored fable of local swamp creatures – Amos the alligator, Babette the mosquito, Roux the raccoon, Paulette the pelican, Telee the turtle, Felix the frog, Inez the duck, T-Claude the crawfish – who see the lights and hear the commotion of the faraway partying booming in New Orleans after the Saints’ Super Bowl victory. Living in a richly textured environment enlivened by Gautreaux’s graphics, the increasingly curious and excited creatures trek through the wild and into the city itself, gathering new companions along the way, and finally emerge in the midst of the greatest celebration the city has seen since the Battle of New Orleans itself. Hebert expresses her love of what sharing the experience with friends means in heartfelt words. “Finally after many years of wishing for a winning season, dreams can come true. It is our hope that the children that read this book can continue the tradition of being loyal fans.” Instead of “The End” Hebert engraves “This party will never end” as the concluding message. These books carry great rewards for children and adults alike: memories of the Saints’ greatest season and Super celebration, insights about what it means to be not only a Saints fan but also an Orleanian, a shared experience with growing children and a reminder that a book is more than a collection of pages and that a football game is more than a score and revenues – they are sentiment and passion passed from one person, and one generation, to another.