By focusing on customer service and local products, Rouses intends on being a Louisiana favorite 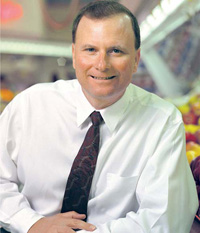 Typically the way things work in American commerce is that a successful business will grow to a sizable presence in a local market, and then a national chain will swoop in and gobble it up. Rouses, a grocery chain based in Thibodaux, bucked the norm when it recently purchased all 15 Sav-A-Center and A&P stores in Louisiana (plus two in Mississippi), doubling its size. With Rouses’ Louisiana focus, low prices, and superior customer service, there’s a lot to love about the store. Co-owner Donald Rouse told New Orleans Living what changes New Orleanians can expect in their new neighborhood supermarkets.

Many Orleans Parish shoppers have probably never heard of Rouses before. How do you plan to build a loyal customer base?
The same way we built it in other areas: with low prices, by stocking local products and by selling what people want in south Louisiana. We will use the same recipe for success that we’ve used everywhere. I think the name recognition will come quickly.

We’re a Louisiana company, and naturally we know Louisiana. Rouses has been in business since 1960, and we already have stores in Jefferson Parish. The new Jefferson Parish and New Orleans stores will carry the same product mix that has built our company to where it is now.

What is the product mix at Rouses?
We carry Louisiana foods that come from local suppliers. And we make our own fresh sausages, tasso and boudin … boil our own crawfish and crabs. We’ve got our own line of Gulf shrimp. Basically, we contract a shrimp boat in Houma that serves our stores exclusively. You’ll also find things like stuffed chickens and turduckens. In addition, the stores have extensive wine and cheese departments and full-service floral departments. We carry lots of produce, much of it organic, and there are healthy lifestyle areas in the stores.

That said, it’s going to take some time to convert all these programs into our new stores.

How do you compare in prices with Sav-A-Center?
We definitely compete on price, but our strategy is everyday low prices. We index against Wal-Mart while Sav-A-Center indexes against Winn-Dixie. We don’t just do a sale on Cokes for one week, that high-low pricing system, which to me is the old-fashioned way of doing business. Our existing stores are high in volume, and we expect the stores we take over to do better than they’re doing now.

How will you compare in service?
We intend to hire 400 to 500 additional team members overall for our new stores because we offer more services. There will be baggers, registers opened, and people throughout the aisles. The policy is to have one customer checking out and one in line. Once the line grows, we open another register until all registers are opened. I don’t want to see three or four people in line. Of course, our service goals won’t happen overnight, but we’ll get them there. We want to be the best in the South. I visit Publix [based in Florida] and H-E-B [based in Texas], and those are some of finest operations in the country. That’s what I want us to be for Louisiana.

What’s going to happen to current employees?
We’ll keep them and try to retrain all of them. But we run stores the Rouses way. When I talk to management, you can see they’re excited about the acquisition. Currently, they’re getting orders out of New Jersey from people who don’t have that local flair. Rouses can react fast and compete better. We know the market. I think it’s the right time for us. Our company is structured to operate more stores than we’re operating. We’ll join the two teams together.

How long will the remodeling take?
As we take over a store, the longest we’ll be closed is from a Monday to a Wednesday. Then, we’ll be open ’round the clock as we continue to upgrade and improve. But we don’t want to do too much during the when it’s going to be so busy. The store on North Carrollton will be first.

The grocery business seems tough. Winn-Dixie declared bankruptcy. Robért’s hasn’t really recovered since Katrina. Albertson’s is gone. Schwegmann’s is long gone. Why do you think Rouses will succeed?
The business is tough for some, but we thrive. Our sales have continued to rise. Just look at this acquisition. It’s mighty big. For a local player to take this on, it shows what we’ve done. You mentioned Schwegmann’s, and like them, we want Rouses to become part of the local culture.

375
previous Hail Cesar!
next In the Company of First Responders