When asked about herself, Dr. Jill Lindberg immediately acknowledges her “odd background.” As an internist and nephrologist, her most popular clinic is called Bones and Stones.

“There are only about 15 doctors in the nation who did endometabolism fellowships that prevent kidney stones and we deal with the top issues, like women who do not respond to the typical Fosamax and Boniva, and figure out if there is something else going on,” says Lindberg. While the bone part may sound self-explanatory, the stone part is more complex. “In stone, patients come in and we have a CT scan where we literally plot every stone they have and the size and since we cannot dissolve them, our goal is no growth and no new stones,” she says. This is accomplished through medications. 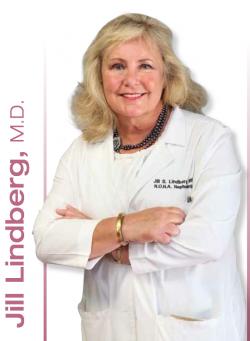 Lindberg’s interest in bones was sparked as an intern and resident in the army for 11 years. During that time, she compared women runners who stopped menstruating because they were too thin to women runners who kept menstruating to non-exercising women. “The women who became amenorrheac, their bones were like postmenopausal women and when they decrease their running and gain a few pounds, their period comes back,” Lindberg says. She drew such attention that she was published as a resident, which was unusual and CNN came to interview her out on the field with the troops. Lindberg went on to study women and men at West Point to find that the women, but more so the men, had lower bone density than their counterparts averaged over four years. “Stress plays a huge part in depressing your hormonal balance,” says Lindberg.

Education is important to Lindberg, who likes to focus on preventative issues. “When I was at Ochsner for 14 years, I started a clinic called Healthy Start to prepare people before dialysis so they were not sick,” she says. Lindberg strives to keep patients working and having a productive life so kidney troubles become part of their life instead of the center of their life. “Prevention of bone loss means not smoking, replacing your hormones when you go through menopause if you can, hoping you do not need to be on steroids, exercising and having calcium but not too much,” says Lindberg. She shares her knowledge in a book that she wrote at a fifth-grade level on what the kidney does and how it works.

Lindberg says controlling diabetes and high blood pressure are two ways to fend off kidney problems. “Another is avoiding toxins which are IV contrasts that are hard on the kidney, Motrin and other non-steroidal anti-inflammatory drugs.” Lindberg also urges people to get checkups, including lab work for kidney function, checking urine for protein and blood and getting a bone density check done every year.

The field has grown since Lindberg made her mark. “There are new medications that can prevent kidney stones and a new drug which is an injection twice a year that can be used in renal patients and is also new and exciting,” says Lindberg.

As a candy striper, nurse’s aide and former nursing school student who decided that route was too easy, becoming a doctor was always in sight. Given her interests in endocrinology and cardiology, nephrology was a perfect match. “Metabolism and the kidneys affect blood pressure, which satisfies the endocrine part of me and for the cardiology part, I am always trying to figure out the best combination of drugs for people with severe heart failure that will take fluid off of them but not damage their kidneys,” says Lindberg.

When it comes to her line of work, there is nowhere she would rather be. “It is gratifying,” says Lindberg. Besides her two children, Lindberg has two stepchildren and four grandchildren. “I am a good cook because I was chemistry major,” she says. Though she makes time for reading and keeping up relationships with friends and family, bones and stones are closest to her heart. Says Lindberg, “My hobby is really my job.”

Mineral metabolism at the University of Texas Southwestern Medical Center

“When people are frustrated, think of the patient as your family and it makes your job much easier and a lot more focused.”