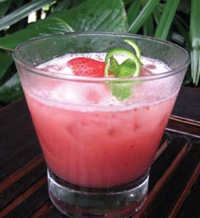 We’ve all enjoyed rum in some fashion or another, be it sipping a refreshing daiquiri or piña colada on the beach, taking the chill off with a hot rum toddy in front of a fireplace or indulging in a slice of rum cake or fruitcake during the holidays. Today, rum is one of the fastest-growing segments in the spirits market and with American’s consuming more than 30 million gallons per year, it’s easy to understand why producers are eager to unveil new styles and flavors.

The origin of the term “rum” is unclear, but the most common theory is that the name was derived from “rumbullion” meaning “a great tumult or uproar.” Another thought is that it’s named after the large drinking glasses known as rummers, from the Dutch word “roemer” (drinking glass). Some believe “rum” is derived from the botanical name of sugarcane, Saccharum officinarum, from which rum is produced. Whatever the source, a few things are certain; rum is more popular than ever, it is produced in nearly every place that sugarcane is grown and it is now available in virtually every style and flavor imaginable.

Light Rums — Also referred to as light, silver and white rums. In general, light rum has very little flavor, aside from a general sweetness and, accordingly, serves as a base for cocktails. Light rums are sometimes filtered after aging to remove any color.

Gold Rums — Also called amber rums, gold rums are medium-bodied and generally aged. These gain their dark color from aging in wooden barrels (usually the charred white oak barrels that are the byproduct of bourbon whiskey).

Spiced Rum — These rums obtain their flavor through the addition of spices and, sometimes, caramel. Most are darker in color and based on gold rums. Some are significantly darker, while many cheaper brands are made from inexpensive white rums and darkened with artificial caramel color.

Dark Rum (also known as black rum) — A grade darker than gold rum, dark rum is generally aged longer, in heavily charred barrels. Dark rum has a more robust flavor than either light or gold rum, and hints of spices can be detected, as well as molasses or caramel overtones. It is used to provide substance in rum drinks, as well as color. In addition to uses in mixed drinks, dark rum is the type most commonly used in cooking.

Flavored Rum —Some manufacturers have begun to sell rums that have been infused with fruits such as mango, orange, citrus, coconut, berries and apple, among others. These serve to flavor tropical drinks and generally contain less than 40 percent alcohol. Flavored rums can also be drunk neat or on the rocks.

Overproof Rum — This rum is much higher in alcohol content than the standard 40 percent, with most offering greater than 75 percent, and whereby preparations of 151 to 160 proof commonly occur.

Premium Rum — As with other sipping spirits, such as cognac and Scotch, a market exists for premium and super-premium rums. These are generally boutique brands, which sell after aging for several years and are often handcrafted. They have more character and flavor than their “mixing” counterparts and are generally consumed without the addition of other ingredients.

Rum is considered to be the world’s oldest distilled spirit.

Prior to being called rum, the sugarcanebased spirit was known as Kill Devil.

In the 1800s, rum was considered excellent for cleaning hair.

For 300 years, sailors in the British navy were given a daily ration of a half pint of 160-proof rum as a health ration, which was usually mixed with an equal part of water to produce a drink called grog.

The colonists in America consumed 12 million gallons of rum per year, almost four gallons per capita.

Contrary to popular belief, rum does not just come from the Caribbean. Any country that has a climate warm enough to grow sugarcane can make rum.

The Rum Hospital of Australia owes its very existence to the revenues produced from rum exports.

“Rum and Bible” ships carried alcohol and missionaries to the New World as part of Triangular Trade.

The first rum sour was formulated in Barbados and served from a conch shell.

“The Original Cuba Libre” and daiquiri cocktail were both born with Bacardi rum.