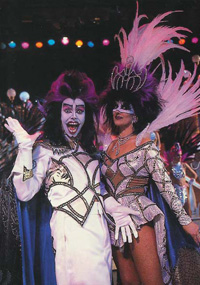 The words “magic show” typically evoke images of a refined, tuxedoed gentleman sawing in half his lovely assistant to polite audience applause. Thrillusions, a brand-new spectacle that’s waking up the theater at Harrah’s, takes such magic show conventions and runs wild with them.

Philippart and Anja, the male and female Dutch illusionists who star in the show, are miles away from tuxes and evening gowns. They wear heavy makeup that recall Beetlejuice, Jack Nicholson’s Joker and Jim Carrey’s Mask, and their onstage behavior is likewise über-expressive and energetic. Their dazzling array of costumes, which Anja designs and creates, shimmer with so many odd and colorful details that it’s hard to take in everything at once; wigs come in every fluorescent color of the rainbow.

A few of the illusions do seem to be drawn on the principles of the saw-alady- in-half trick (whatever those might be), but in Thrillusions, the bodies are cut up, segmented, twisted around, and reassembled with such inventiveness that the show’s illusions become something entirely new. Meanwhile, so many quick tricks are woven throughout the show that one needs a sharp eye not to miss any.

Thrillusions marks the U.S. premiere for Philippart and Anja who have a huge following in Europe and Asia. “They’re well-known because they’re so unique,” remarks Hollie Vest, the executive producer of the show. “They don’t just roll on box after box. They present their illusions with humor. They put a ‘thrill’ in illusions.”

Vest first saw the duo perform when she was working in Sun City, a casino and resort destination in South Africa. “I saw how much the audience loved them, and I loved them. I’ve been on a 10-year quest to bring them to America,” says Vest, who is also the owner of the Magnolia Mansion bedand- breakfast on Prytania Street.

The subtitle to Thrillusions is “Rockin’ the World of Magic,” and rock ‘n’ roll numbers typically alternate with the illusions during the program to create a balance of the show’s two primary elements. Philippart and Anja, however, often integrate the rock aspect of the show into their act, such as when they conjure all the show’s many dancers out of a single box one after the other or when they make Tina Turner appear.

Indeed, the Tina Turner impersonator is clearly a third star of the show. She performs all her hits, from the “Proud Mary” to the Private Dancer era, and enjoys coaxing male audience members onto the stage. A David Bowie impersonator also makes frequent appearances in the ’80s Let’s Dance incarnation. (Philippart and Anja already channel enough Ziggy Stardust for everyone involved.)

Vest is proud to point out that both Turner and Bowie sing all their own songs (no lip-synching). “We like to call them re-creations, not look-alikes or even impersonators. They’re re-creating the illusion that you’re watching stars perform,” she explains.

Vest believes that New Orleans is the perfect home base for the show, which is why she worked to bring them to Harrah’s. “New Orleans is the most European and the most fun-loving of American cities. That’s what Philippart and Anja are about.”

“I also wanted to get some good media attention to counter all the bad,” she continues. “I wanted to give people who’ve never been to New Orleans a reason to come and give past visitors a reason to return. It’s for the locals, too, of course. Everyone needs their spirits lifted. We’re bringing the magic back to New Orleans … pun intended.”

Thrillusions is currently booked for an indeterminate time at the New Orleans Harrah’s. The expectation is for the show to build a solid fan base here, and then the producers will take the show on the road, most likely to other Harrah’s properties. Vest is leaving the itinerary open for now, but since New Orleans will always be a perfect match, the Crescent City will remain its home base.

Ticket prices are quite reasonable at $25, or $20 for Louisiana residents with a state ID. Vest points out that a show like this would be four times as much in Vegas, but Harrah’s wanted to keep the prices affordable to all.

“It’s going to be big,” says Vest. “And New Orleanians can say they saw it here first.”