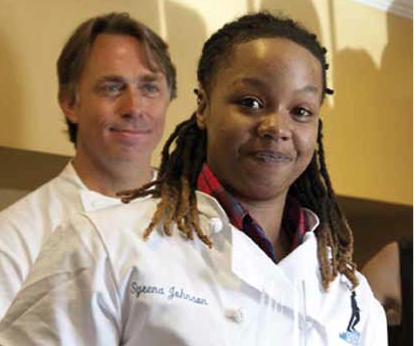 New Orleans native Syrena Johnson, who has been selected for the Chefs Move! scholarship, will train at the French Culinary Institute in New York City and be mentored by celebrity Chef John Besh, a native son dedicated to the culinary riches of southern Louisiana.

The idea for the scholarship began with Jessica Bride Mayor, a New Orleans native who moved to New York in 1999 to work with the Smith & Wollensky Restaurant Group. She went on to become director of The Culinary Trust and the John Besh Foundation. She is also a candidate for a diploma from the UK-based Wine & Spirits Education Trust in London. New Orleans Living magazine had a chance to sit down with her and find out how it all got started.

?Bride had the idea to start a fully paid scholarship to send a minority applicant from New Orleans to culinary school in New York and bring them back to be a leader in New Orleans and in the culinary field. “I thought the perfect person to do that with would be John Besh, a good chef and clearly a good businessman,” Bride says. About two months later, she was at the airport coming back to New Orleans and bumped into Besh on the same flight. “He said he loved the idea and wanted to do it and within a week, we kicked it off.”

?Besh established a foundation as a way to start and manage the scholarship. The foundation now takes on other projects as well. “The scholarship is a full ride for a minority applicant from New Orleans to go to culinary school in New York,” says Bride. It covers airfare, housing, uniforms, tuition, a $100 metro card to help with public transportation, a $250 grocery card to help the recipient get settled in and job placement assistance, Bride says.

Assistance is offered so the transition is smooth. “We give them a computer, camera and lessons on how to use both and we set them up with a blog on our website, Twitter accounts and the best thing is we are offering a mentor,” Bride says.

?The school is a nine-month program, followed by an eight-week paid internship at a John Besh restaurant. After that, they can spread their wings and do whatever they would like to do, Bride says. “Our whole goal is to give people the opportunity who would have been cooks, who were working in kitchens, and help them train to a level that will help them become a leader in the kitchen and in the community,” says Bride.

One person is chosen each year. “It is a fantastic program,” says Bride. The scholarship foundation wants to make sure the person chosen will prosper in the program and will be open to new education. The scholarship winner is also required to have a year of experience in the kitchen. “We wanted to take someone who was going to have a career in the kitchen no matter what and take the opportunity to make something big of it,” Bride says.

?They are thrilled to have admitted Syrena Johnson. “One of the things that sold us on Syrena is that one of the interview questions was about what you do after graduation and she, unprompted, said the first thing she would do is show all the kids she worked with at Liberty’s Kitchen that they can do it and that all they have to do is stick to what they want and they can achieve,” says Bride. They found it amazing that she had such an appreciation for being a leader. Liberty’s Kitchen is a nonprofit group that trains at-risk youth in life, social and employment skills in a culinary setting.

?Syrena’s story is unique. “She was evacuated by the National Guard during Katrina and said after that, the people who should have been leaders did not step up to be leaders and she was going to come back and be the kind of leader they need,” Bride says. “She is 21 years old and wise beyond her years.”

Syrena will be in a three-day-a-week program and the school runs a restaurant as well. “The students are the people cooking the food,” Bride says. Training is special because students are trained in classic French methods of cooking, which is a great tie to the French heritage and cuisine in New Orleans. “Syrena will go through prepping, sanitation, how to cook large meals for big groups and will prepare meals for the whole school,” Bride says. At some point in the training, a family meal is prepared and students are given a budget of $1 a head to create the menu and work through different stations such as salad, pastry and the main course.

?Syrena is the first person to attend on the scholarship and is enthusiastic. “She is very thrilled and up for the challenge,” Bride says.

Chef Besh’s reputation made Bride feel comfortable about starting the program. “You only hear great things about him and who he is helping,” says Bride. “There were so many wonderful people, and we wanted to send all of them; it was incredibly difficult to narrow it down and come up with one.”

The scholarship is described as a special opportunity for a special person. “The more we stuck to it and believed in the program, the more it blossomed and it has been wonderful meeting community leaders that have helped us,” Bride says.

?Support has been overwhelming. “The community rallied behind the idea of sending a talented member of the African American community to train in a world class setting and back again, and I went to sleep so many nights with a huge smile on my face and a warm heart,” Bride says.

Syrena begins her studies on November 5. “The best part of the program is meeting the people in the community who also believe in the idea that we just need to give someone a chance and they will come back to do great things,” says Bride. Syrena is sure to do just that.

351
previous A Social Enterprise
next The St. Bernard Project