“Race: Are We So Different” runs through September 25 at the Old U.S. Mint 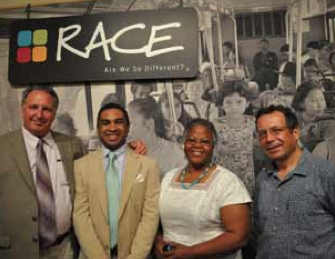 In 1999, legislation was enacted to create the Louisiana Civil Rights Museum. The LCRM hopes to foster a deeper understanding of the Civil Rights movement in the state and its ongoing relevance, using the process to heal, honor and inspire social justice. LCRM is part of the Department of Cultural, Recreation and Tourism and a branch of Louisiana State Museum. It will be housed in a facility in New Orleans.

Though LCRM does not have a home yet, it has brought an exciting inaugural exhibition to the city. “Race: Are We So Different” – the co-creation of the American Anthropological Association and the Science Museum of Minnesota – began in June and runs through September 25 at the Old U.S. Mint.

“The exhibition is our coming out, if you will,” says Turry Flucker, LCRM’s project director. “We’re letting the general public know that though it’s taken a long time, the museum is on the radar.”

Flucker, who also has collaborated on books and co-curated exhibitions with the artist Phoenix Savage, has been involved with LCRM since 2004.  He relocated temporarily after Hurricane Katrina, but returned when work on LCRM recommenced. Both the museum and the current exhibit are “really near and dear to my heart,” says Flucker.

How did you choose this as your inaugural exhibition?

Our founding chairperson, then state Sen. Cheryl Grey Evans, researched and found the exhibition. She thought it was a great idea to have something like this that would address the fundamental question of race. The exhibition illustrates that brilliantly, in ways we don’t think about it, it shows that race is around us.

One of my favorite quotes is contained in one of the videos in the exhibition, by a historian involved in the project. He says, “Racism is not about how you look, it’s about how people assign meaning to how you look.” That really sums it all up.

What can visitors to the museum expect?

It starts with a resource area in the center of the exhibit, which tells the story of race in society. We have comfortable seating around every exhibit panel so that visitors can sit and talk. That’s one of the things I love about the design of it, is that it is so informal and inviting.

How is the exhibition set up?

The exhibition is divided into three sections: the history of race, the science and race in contemporary society. The science section discusses African Origins through interactive animations, which show how humans emerged from Africa to populate the world. There’s a video that talks about the idea of race, which introduces the exhibition themes and invites visitors to explore the history of race and racism.  There’s also a kiosk that talks about mascots that are used, which are racist in nature, like the Braves or the Redskins. There’s a video component in which some Native Americans discuss their feelings on the subject.

Throughout the exhibit there are various monitors that show sociologists, anthropologists and historians involved in the creation of the exhibition. They talk about their field of study as it relates to race.

Is it possible to take in the exhibition in one visit?

It’s definitely something people should see twice or more if they want to get the full value of it. It’s not something that is intimidating in any way, however. It’s designed so you can take it in, ponder the issues. “I have worked in museums for 17 years and I’ve gone back to it a couple of times to absorb it.”

What activities are planned around the exhibition?

We’d like to develop a roundtable discussion and take it to various communities throughout the state. At each stop, we’ll have a candid conversation tailored to that community, inviting local leaders to address the issues from a grassroots perspective.

There’s a large online component for those who wish to explore the issues further (http://understandingrace.org/home.html).

The website is wonderful. It is, as you saw, a project of the American Anthropological Association. In my mind, it’s these scholars’ attempt to bring their (behind-the-door) discussions on the issue to light and share them with the public. As museum professionals, that is what we do all the time.

The website has a section devoted to issues people can address as a family, things parents can discuss with their children. Are any parts of the exhibition geared toward children?

There’s a section in the exhibit space that we’ve dedicated to kids in grades K-12. We also have an education guide video that will start discussions. For example, there’s a section called, “Where do you sit in the cafeteria?” It’s been really well received in terms of word of mouth, and a lot of summer camps have been booking.

Is there anything else you want your readers to know?

The museum has the potential to transform lives. This exhibition is the beginning of that. To get the community thinking about race and racism in America and, most importantly, doing something about it.  Knowing and seeing and learning about it is great, but we want to go into the community and start making a difference.