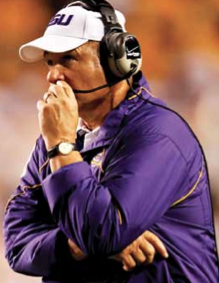 The opening day of football is a tradition like no other and it may be rooted in something intrinsic. The first sensation of a cool breeze, the decline of summer days, the sense of a waxing of the year and time itself, and the desire for a final explosion of exuberance before the cycle of life threatens to slip away impels a drive for action in community, for conflict, then resolution. Maybe that is why the sport of football incites such passions in Louisiana, where summer is felt like no other place. In Louisiana, football means the Louisiana State University Tigers playing in Tiger Stadium, a standing room only crowd bearing down on its enemies like, well, tigers staring at their dinner after a long fast. There is the sense in Louisiana that no one can ever come into our state, with its bayous, marshes, swamps and forests, its cities and towns built on islands, levees and bluffs, and leave victorious. All that energy flows into Tiger Stadium on Saturday nights and bursts out over the course of 60 minutes of play. This year promises to be particularly frenzied as the Tigers bring in a new offensive style and feature a raft of new and experienced players who offer a real chance at a national championship.

For all intents and purposes, on September 3,the Tigers open the major college football schedule for 2011 with what amounts to a very early playoff tilt against the Oregon Ducks on the first Saturday of national play. The Ducks, 12-1 in 2010, were within a field goal of a national championship last year and carry a longstanding grudge on behalf of the Pac-10 and the West Coast as a whole against the SEC, which seems to constantly stand in the way of that conference winning it all year after year. It will be hard to find a better intersectional faceoff all year and a mammoth offensive display should be in store.

Oregon was the country’s best offense last year and to respond LSU will need to improve its sluggish performances of 2010 despite having one of the nation’s best offensive lines and star skill position players, such as wide receivers Rueben Randle and Russell Shepard. Some of the faces on offense will be different but the style of play, strategy and tempo may be brand new because of perhaps the biggest change head coach Les Miles made this year – the hiring of offensive coordinator Steve Kragthorpe.

Kragthorpe crafted powerful, pro-style offenses at Tulsa and Louisville, and he should bring an on-field preparation and quick thinking ingenuity that will make the frustrating in-game miscues of Gary Crowton’s offenses a thing of the past. In particular, Kragthorpe’s offenses have featured excellent pro-level play from his starting quarterbacks. The question has frequently been asked whether the Jordan Jefferson whose stellar play commanded the Tigers to an electric Cotton Bowl win over the Texas A&M Aggies was truly Jefferson finally maturing and grasping his role as leader and decision-maker or simply the best game he will have ever played. If the latter, and if consistency is again lacking from Jefferson, expect featured signee Zach Mettenberger to jump Jarrett Lee and get a large opportunity to use his much touted rifle arm to fully exploit the possibilities of Kragthorpe’s system. No matter who is quarterback, if Kragthorpe so chooses (Crowton most often did not), he has one of the few receivers in the nation, Randle, who can score from anywhere and dominate a game at any time.

Perhaps the most exciting player to emerge at the end of last year was running back Spencer Ware, who simply took over the Cotton Bowl game and exploded for more than 10 yards a carry against what was a well-respected Aggie defense. LSU has not had an All-American running back since Kevin Faulk in 1996; and while Ware’s role in a time-sharing backfield may make attaining that award difficult, it appears he definitely has the talent to make that happen. T-Bob Hebert, P. J. Lonergan, Will Blackwell and Alex Hurst anchor a strong, experienced line that should give Ware and his backfield mate Michael Ford a lot of room to maneuver. Between Kragthorpe’s presence, hopefully improved quarterback play and Ware’s bigger role, the offense should be much improved. And it’s amazing to think what could have been (for instance, LSU playing Oregon for the national championship instead of Auburn) if the offense had been just a little better last year.

While all but one offensive starter returns this year, only eight return on defense, where the key losses include Patrick Peterson, Drake Nevis and Kelvin Sheppard. The defensive backfield, particularly Morris Claiborne and Tyrann Mathieu, should be fast and very difficult to pass on, even if lacking the dangerous element of Peterson. But the real question mark remains in the defensive front seven. While linemen Barkevious Mingo, Sam Montgomery and Anthony Johnson, and linebacker Ryan Baker lead the way, as a group they are unproven. If the front seven fails to deliver pressure on opposing quarterbacks, the sort provided by Nevis and Sheppard, the result could be a slip in the defensive rankings from last year’s top 10 nationally to something considerably lower.

Oregon will enter the opener with the reputation as perhaps the nation’s best offense, but LSU’s schedule offers several other powerful challenges, including Florida, Alabama, Auburn, Arkansas and possibly even Mississippi State. The SEC’s incredible history of winning five straight national championships and never losing a BCS title game has mostly to do with its fast, hard hitting defenses. Pac-10 teams like Oregon may dominate all year in their conference but when they play an SEC team they learn that their speedy backs can no longer beat defenders to the corners, their receivers can no longer run free downfield and their athleticism is ultimately pounded down by defenders who hit at one or several more weight classes above what they are expected to. And the corollary follows that any SEC team that wishes to win the national championship has to prove itself first and foremost on defense.

The season is a long one, it’s true, but oddly enough what happens in January when the championship is played may, for LSU, be foretold in the first week of September. At that time, LSU will have to prove on the first day of the football calendar that its youngish but talented defensive front can withstand the determined offensive assault from the very sort of national contender they hope to face on the last day of that very same schedule.