In the Company of First Responders 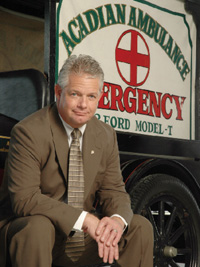 Acadian Ambulance Service, founded in Lafayette in 1971 with two used ambulances and a handful of Vietnam vets to serve as medics, now covers a territory of more than 20,000 square miles from 100 stations. The private ambulance company specializes in hard-to-reach rural areas, but it also has a significant presence in New Orleans, Jefferson Parish, Baton Rouge and other population centers of Louisiana. Growth throughout the state and into parts of Mississippi and Texas continues. New Orleans Living spoke with New Orleans resident Steve Kuiper, a vice president of operations, from his offices in Gretna about the company’s history, his background as an EMT and Acadian’s role during Hurricane Katrina.

How did Acadian Ambulance get started?

In the early 1970s in Lafayette, all the ambulances were operated by funeral homes. New federal guidelines required them to upgrade their services, but the funeral homes didn’t want to shoulder the extra costs, so they all began to shut down their ambulance operations at once. It was a crisis. Three young entrepreneurs, one who is still the CEO of the company, stepped up to create Acadian and received the blessing of the city council. It worked as a membership service, and Acadian would have a membership drive every August. Citizens would pay $15 a year to cover ambulance transport for one year for them and their families. If they didn’t want to become members, they wouldn’t be denied emergency care, but they’d have to pay the full price for an ambulance trip—about $250.

What’s the status of the company now?

We started out with two vehicles, and now we have 270 ambulances in 38 parishes and counties. Oil companies contract our medics to be stationed on their offshore rigs. We operate medically equipped helicopters as well as airplanes that transport donated organs. We even have a couple of airplanes when they’re not needed medically that are chartered by private citizens, normally businessmen. Basically, we grew two ways. In the early days, neighboring parishes would see our professionalism, care and the effectiveness of our service. We offered excellent coverage and good response times. They’d bring us on board, and we’d add to our fleet and staff. It was a natural growth. The second avenue has been through acquisitions of other private ambulance companies.

Does the company still receive its funding through memberships?

These days we earn most of our revenue through Medicaid, Medicare, and insurance companies. Memberships are still available though. It’s a good deal for Medicare recipients because they have no out-of-pocket expenses.

How does Acadian serve New Orleans?

In some parishes, we’re the exclusive ambulance service provider. In New Orleans, the city handles ambulance services through EMS, which is taxfunded. We work with the government and hospitals in both Orleans and Jefferson parishes to help out in nonemergency situations or to provide backup when the system is overburdened.

What was Acadian doing during Hurricane Katrina?

In the 36 hours before landfall, we evacuated several hundred people from nursing homes and hospitals. We had about 75 ambulances helping, many coming in from elsewhere. A dozen of our medics were on-site at the special needs center in the Superdome. And in the days following Katrina, we assisted in the evacuation of thousands. I personally was stationed at Memorial Medical Center. That was where a doctor and nurses were accused of murdering patients. The case has since been thrown out, though.

All I saw was a staff giving 110% in caring for every patient, every family member of every patient, and the pet of every family member of every patient. They had to feed four times the people they normally had to, and they did it efficiently. I have nothing but the highest praise for them. The streets were impassable, so our ambulances there couldn’t do anything. The Acadian medics on-site simply supported the Memorial staff and were instrumental in assisting with the helicopter evacuations. By that point, I had been relocated to the triage area at I-10 and Causeway.

There were thousands of people to examine. If someone needed medical attention, an ambulance would take them to the state triage center in Baton Rouge. If they didn’t, they would wait underneath the overpass for a bus. And they waited a long time.

So, in addition to being the vice president of operations, you are obviously also a medic.

Yes, I’m a paramedic. In 1975, I received my chauffer’s license and started out as a driver with Acadian. Within nine months, I earned my basic EMT certification and kept learning. These days, I’m mostly in the office. I’m responsible for overseeing all the evacuations in our area, and I’ve never left for a hurricane. But I’m still a paramedic at heart. Every now and then, I still get the opportunity to jump on a call. It’s not as often as I’d like it to be.

395
previous The Big Thrill
next Health for the Holidays