Eulogy for a Saint

As a local hero fell, so did fans’ hopes for this season’s Saints 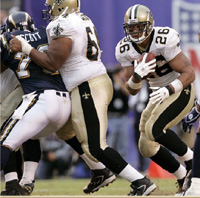 An abundance of expectations rose before the Saints as they entered September defending their first division title since 2000, and only their third ever in 40 campaigns. But on September 24, in what would prove the denouement of a tragic homecoming in the Dome, an audible rasp rose from the collective breath of New Orleanians as they watched a hero, Deuce McAllister, crumple to the ground. An initial good-faith belief that their team could rebound from an 0–2 start to capture a repeat title and further playoff success evaporated then and there on the green painted carpet. Many fans thought the Saints would have won had Deuce not fallen on that fatal evening on Girod. It was an emotion bred of prior disappointments, a permanent instinct shared by all Saints fans that logic has no part in. In short, the star-crossed fans realized and resigned themselves, in shared whispers as they plodded down the Walk of Shame on Poydras, that the “same old Saints” had returned.

Deuce’s accomplishments make him the superlative player of our generation: He stands as the all-time leader in rushing attempts, in rushing yards, in rushing touchdowns, one of only two players to have two seasons of 10-plus touchdowns, the only running back to make the Pro Bowl two consecutive years, the only player to have three straight 1,000-yard rushing seasons. He has the second-most rushing yards in a season (33 short of the all-time record held by George Rogers) and the eighth-most receptions of all time—in all, a tally of 87 games, 1,322 attempts and 216 receptions, 7,270 total yards, 48 touchdowns, and two Pro Bowls.

He is equally respected off the field as well. He received the 2006 Ed Block Courage Award (for overcoming adversity in returning from his first knee injury), and with quiet dignity he has led the team, represented the city, and directed his Catch-22 Foundation, which has risen above the usual hoopla of the celebrity PR–motivated foundations, to positively affect lives. Deuce is a true local, a Mississippi man who has been a leader for an often lost cause and whose struggles with injuries are reminiscent of a proud, battered sailing ship, its rigs rent after impossibly emerging from a hurricane.

In the Tennessee game, he suffered a torn ACL and meniscus in his left knee, and in the course of undergoing surgery to repair it, he had minor surgery on his right knee to alleviate soreness. Meanwhile, the Saints find themselves once again on the precipice of the NFL’s nadir. Many will wonder what Brees and Payton were doing calling for, and throwing, a pass on second and 10 all the way across the field, high and floating, leaving Deuce wide open for a clean shot from the Titans’ Keith Bulluck. The drive stalled on the very next play, for naught. As usual, Deuce laid himself out for the team and mightily exited on his own power, but now will not return. His 2008 season is in doubt, though if personal strength and resolve have anything to do with it, Deuce will be a bettor’s favorite to make it happen.

Deuce’s warriorlike exit from the field that night does not belong in the pantheon of well-known horrorfilled Saints’ moments: Russell Erxleben’s booting a punt to the hated Rams, which they returned for a game-winning touchdown to keep the Saints from their first playoff birth; the team’s hiring an astronaut as a G.M.; Ricky Williams in a wedding dress; Mike Ditka in a reggae wig; and all the other national embarrassments that have befallen this franchise. No, if things continue apace, that dishonor will belong, when all is said and done, to the final disposition of the team itself, so perhaps it is best that Deuce will have no role to play in the Saints’ 2007 season.

After a strong win over Seattle, the leaders of the NFC South appearing vulnerable, and a juicy soft stretch of weak teams in October and November, it is entirely possible that the Saints will turn things around. A reemergence on the top side of the division rather than its bottom seems more than possible

But to do so they will have to make their improved play permanent.

In the first quarter of the season, it seems as though everything that went right for the Saints in 2006 went wrong in 2007. Offense, defense, and special teams have blundered equally. Among the blackand- gold faithful, there is a certain release of anxiety, for New Orleanians are well acquainted with catastrophe, plague and letdowns great and small. And so it seemed strange last year when the very emblem of their struggle, their flagship franchise, had so swimmingly risen to the top of the world’s richest, glossiest sporting conglomerates just as the city itself clambered out of one of this nation’s greatest disasters. Fans carried the demeanor of the suspicious-but-happy school geek who has been mysteriously asked to the prom by the homecoming queen, certain—but perhaps insouciantly uncaring—that a prank is sure to follow. And how it did. New Orleanians have returned to laying suppositions as to how many voodoo queens may have been buried in the Girod Street Cemetery and the effect thereof on the team. They can fondly recall the great season that was, along with the inevitable fall, as always, from football grace.

224
previous The Tiger Unleashed
next Resurgence by Air