Dr. Janet Ross is blessed to do what she loves every day. Originally interested in women’s issues, going into women’s health was a natural extension.

“I have a large obstetrics practice, which is enjoyable because the women are at a joyful point in their life and it’s rewarding,” says Ross. She also enjoys taking care of her patients in the gynecologic part of her practice as they go through the different stages of their lives. “I get to take care of women through all phases of their lifestyle, starting out when they are teenagers first becoming sexually active through their reproductive years and on to later or perimenopausal years.” 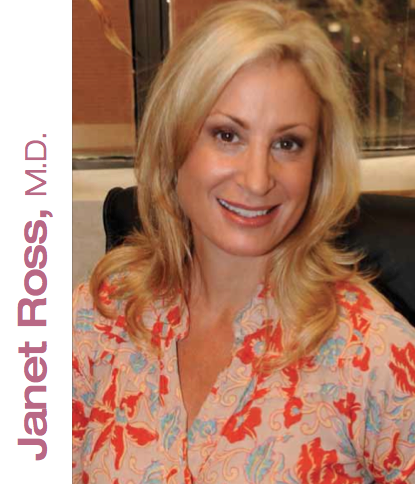 Her career called out to her during her residency. “One of the residents pulled me into a room and asked if I wanted to assist in the delivering of a baby, so we put on our protective gear, he put his hands on top of my hands and it was the most magical experience of my life,” says Ross.

With teenagers, Ross finds herself talking about contraceptive choices, being vigilant about condom use and new developments like the Gardasil vaccine, which protects against four of the most common and problematic HPV subtypes. Among all ages, screenings are important. “I recommend mammograms at 35 and annually after age 40, sexually transmitted disease screening for sexually active women under age 25 and for any women with symptoms, and screening for cholesterol and thyroid disorders in the perimenopausal years,” Ross says. The pelvic exam and Pap smear are also helpful for prevention of cervical, uterine and ovarian cancer.

With older patients, Ross believes it is important to listen and gather as much information as she can about their profile to make a correct diagnosis and use the right treatment. “One of the newer exciting treatment modalities for women with bleeding due to fibroids or polyps is a procedure called a thermal endometrial ablation, which is neat because it is an outpatient procedure, minimally invasive and you can destroy the lining of the uterus so you no longer have periods,” Ross says.

Ross’ practice is constantly evolving along with changes in technology. “My latest endeavor is participating in the robotic surgery program because daVinci surgery is an alternative to both open surgery and laparoscopic surgery for complex gynecologic procedures,” says Ross. With this minimally invasive procedure, Ross is able to treat uterine fibroids, uterine prolapse, endometriosis and bleeding through small incisions. “Patients have less pain, shorter hospital stays and a faster return to normal daily activities,” Ross says.

The electronic medical records system is also constantly updating. “It helps us to more quickly and accurately attend to patients and ultimately enhance quality of care because it makes it easier to track medications, lab results, diagnostic test results and other physician notes,” says Ross.

Ross and her husband, a psychiatrist, have been married for 18 years. They met in high school and went to medical school together. In her free time, Ross enjoys practicing Bikram yoga. She speaks of her compassion for patients and zest for the future of her field. “The key is to stay on top of what is new and evolving with advances in technology and medicine,” says Ross.

“When it comes to patient care, treat all patients with dignity and respect.”