The New Orleans Board of Trade was the setting for the elegant wedding of Lara Susan Caillouet and Jean Pierre Daigle on Friday, October 12. 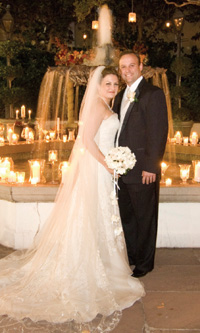 The couple exchanged vows in an evening ceremony held in the courtyard. The bride wore a strapless A-line gown with cathedral-length train by Christos. The edges of her long veil were accented with the tiniest crystals that reflected the beautiful candlelit background as she walked down the aisle. The four bridesmaids wore strapless dresses by Lazaro, two of which were knee-length black taffeta and tulle A-lines, while the other two were candlelight-colored floor-length gowns. The groom and groomsmen were handsomely attired in black tuxedos.The exquisite iron gates of the New Orleans Board of Trade welcomed guests onto a formal promenade that was decorated with exotic flowers imported from Singapore and Hawaii by the talented Dee Vu, of Bella Blooms Floral. Dee paid her compliments to the bride’s mother, Betsy Jerrell Caillouet, for having a unique vision of her daughter’s wedding. The grand promenade led to the courtyard where the couple exchanged vows amid hundreds of candles, tiny crystal lights and miniature candlelight chandeliers, which hung from the trees. This captive setting was created by Terrry Cambise, of A Soirée. The bride was escorted into the courtyard by her father, the Honorable L. Charles Caillouet.

Guests were entertained by the Louisiana Philharmonic Orchestra and a string quartet, accompanied by the heavenly vocals of Angela Mannino, a New Orleans native. Talented tenor Ian Lane, who has performed at the White House, sang “The Lord’s Prayer.”

Following the ceremony, which was officiated by the Honorable F. Hugh Larose, guests returned to the promenade for cocktails and hors d’oeuvres. A martini bar was decorated with a huge fleur-de-lis ice sculpture, which was a surprise for the bride from her parents. The wedding party moved onto the arcade for photos by Oscar Rajo, and a formal reception followed. Pigéon Caterers provided a creative feast for guests while the sounds of Rockin’ Dopsie filled the room. The couple walked onto the dance floor under the mural-domed ceiling and danced to “I’ve Been Loving You Too Long,” by Otis Redding. Swiss Confectionary designed a fabulous four-tiered wedding cake crowned with autumn-colored roses. Maurice’s Bakery designed a massive chocolate Grand Marnier groom’s cake topped with strawberries.

The couple bid farewell to their guests and dashed off in a white wedding carriage leaving behind enchanted memories.