J’anita’s at the Rendon Inn 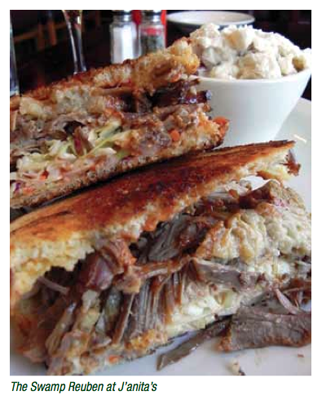 The first job I had in New Orleans was at Kelley & Abide Co. located on Euphrosine Street, a clothing distributor that had been in business since 1910.  Though I thought it odd at first, working in such an industrial setting, the staff treated me like a new member of the family (mainly Abides) and it took no time for me to feel like I belonged.

One difficulty while working there was finding affordable places to go for lunch that didn’t consist of the usual, fast-food choices. Plus, if we ventured too far from the office, our lunch hour would be compromised, translating to a smaller paycheck. I sure wish J’anita’s was at the Rendon Inn back then. John and I decided to give their new location a try for my 68th cheat. I am hovering around a loss of 77 pounds. … Will this stalemate ever end?

The restaurant is located in a strange little triangle on the corner of Rendon and Eve that is a bit confusing to find. Through a bit of backtracking and driving that certainly annoyed others, we finally made it to J’anita’s just a little after noon. As I was to discover, the Rendon Inn was formerly a bar that really hasn’t changed all that much. A huge rectangular bar dominates most of the room with high, wood tables hugging the perimeter.  There is also a nice, large patio outside, but we settled down inside with some $3 mimosas and ordered.

Our appetizer, hilariously dubbed “Crunchy Hog Balls,” arrived fairly quickly. They were six, delicious bite-sized balls made from bits of pulled pork mixed with house-smoked pepper jack cheese, rolled in panko and fried. Our entrees arrived soon after we finished gobbling the last ball. John got the St. Chuck Duck with their soup of the day, Tomato Basil. His sandwich was so decadent; duck sautéed in Cabernet and served on grilled sourdough bread with Granny Smith apples, smothered in cheddar and bleu cheeses and dressed with a rich, currant relish. I know exactly what I’m ordering next time.

My sandwich, the Swamp Reuben, was pretty darn good as well. Toasted sourdough bread piled high with beef brisket and pulled pork dressed with coleslaw and their own homemade barbecue sauce. I had no difficulty devouring it, along with some perfect potato salad on the side made with red potatoes, onions and “no pickley stuff” to muck it all up. It’s good to know J’anita’s fantastic food will never change no matter where they end up!