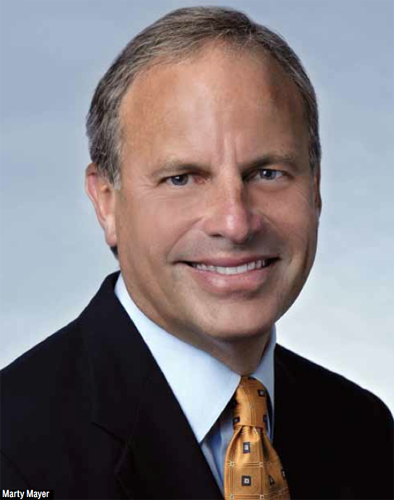 Although it’s one of the largest and most established real estate companies in Louisiana, Stirling Properties doesn’t stay entrenched in its ways. The company’s direction can in fact be a bit of a moving target, but president and CEO Marty Mayer says that’s by design. After all, real estate itself is a moving target. Instead of developing laser-like focus on any one particular specialty or niche, he finds it’s better to concentrate on staying adaptable.

“My primary focus for Stirling Properties right now is to position the company to take advantage of the marketplace,” he says. “Every year brings new challenges. We had Katrina-related upheaval that was followed by a feeding frenzy on the Northshore and in other areas. Then you had a slump and then the national economy meltdown. Over the next five years, we will see more changes and volatility. But sometimes the more volatile the market, the more opportunities there are.”

As one example of Mayer putting the principle of adaptability into action, Stirling sold its 20-year-old residential division to Latter & Blum in January of this year, which signifies to industry watchers that Stirling sees greater upside in commercial properties. And that purchase came a month after the company closed on the Pan American Life Building, a Class-A office building in downtown New Orleans. It’s the sort of acquisition that doesn’t have precedence in the company’s history.

Stirling Properties has its roots as a shopping center developer, and it later diversified into office buildings and property management. As things stand today, Stirling owns 12 million square feet in its portfolio with retail comprising 60 percent and the rest primarily office properties. During a period leading up to 2008, Stirling constructed over a half-dozen suburban, Target-anchored shopping centers as well as many free-standing Walgreens, but those types of projects have diminished. The country faces a glut of unused retail space, retailers have slowed expansion plans and financing hurdles have increased.

“In the last few years, demand for ground-up developments has softened, so we’ve added a strategy of acquiring existing properties,” Mayer acknowledges. “With that being said, we’re about to hopefully break ground on a new development at the corner of Carrollton Avenue and Bienville in Mid-City.”

Mayer reports he’s seen a lot of interest in this former Ace Hardware site and that if the planned development were twice as large, Stirling would have no problem filling it with retail tenants.

“Right after Katrina, everyone had a lot of uncertainly about what New Orleans was going to come back to be. The pace of getting any development going was slow, because people were waiting to find out what was going to happen,” he says. “Whereas most of our work had been in the suburbs, now we’re seeing more activity in New Orleans than we’ve ever seen.”

“I’m involved in [the business development group] GNO, Inc., and I see people looking to expand here, grow here and create jobs,” he says. “We’ve got a real economy going on. Meanwhile, my cohorts in other parts of the country are singing the blues.”

Mayer has been president of Stirling Properties for more than a decade, but when he joined the company about 25 years ago, he didn’t have any expertise in real estate. His career up to then had been in the oil and gas industry, when he was employed by Exxon in Houston, and then in manufacturing with the international conveyor-belt company Intralox, based in Harahan. Stirling Properties, at the time known as Maurin-Ogden, LLC, recruited him in the mid-1980s, which was a terrible time for Louisiana real estate. Mayer wondered if he had made a mistake.

“We had the local oil bust followed by a national credit crunch. It was a double whammy,” he says, adding that Stirling’s situation was made worse because previous decisions had left the company vulnerable. “Those difficulties have shaped a lot of my philosophy today about how the company should be run. We never want to be put position again as we were back then. But you learn a lot more in hard times and from failures than you do from successes.”

As a result of those lessons, Stirling Properties didn’t get caught blindsided by the 2008 crash. The company requires conservative underwriting terms with real equity and always looks to realistically evaluate the risk of its deals. On a more general level, Mayer finds it important for him and his employees to be connected to the community and his industry. For example, he’s a trustee on the International Council of Shopping Centers as well as being a two-year chairman of GNO, Inc.

“The wake-up call for me was Katrina,” he says. “It presented an opportunity to make fundamental changes. Everyone, myself included, allowed politicians to lead us, and they led us into decades of decline. We have to lead ourselves. One of the silver linings is that we now a have vibrant private sector working across industry lines. That has never happened before.”