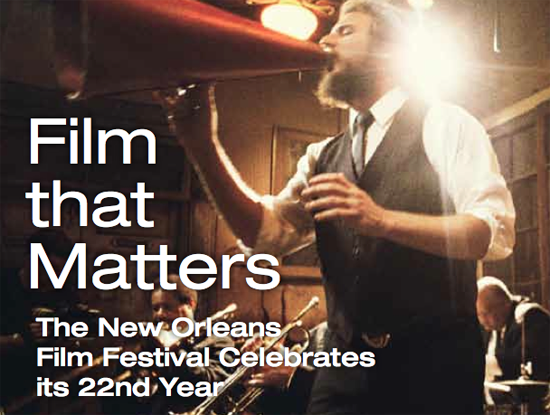 From October 14 through October 20, the New Orleans Film Festival will celebrate its 22nd Season. The Festival – as well as the New Orleans Film Society (NOFS), which hosts it – has grown enormously over the last several years. Festival attendance was up by 40 percent in 2010, and Society membership has tripled to nearly 1,000.

The Festival is Jolene Pinder’s first as NOFS’s executive director. Pinder, a Florida native, has a degree in English literature from the University of Chicago and a master’s from the University of Florida’s Documentary Institute. She arrived in New Orleans earlier this year from New York’s Arts Engine, which produces and distributes independent documentary films. At Arts Engine, she directed and produced documentaries and organized Art Engine’s Media That Matters Film Festival. Already, she’s had an impact on NOFS’s visibility and programming, presenting outdoor screenings at NOMA’s Sculpture Garden and showing drive-in movies as part of a partnership between NOFS and NOLA Drive-in. Recently I spoke to Pinder about the 2011 Festival and NOFS in general:

What led you to the job in New Orleans?

[I loved my work at Arts Engine] but was ready to leave New York when the right job came along. I was invited to be a juror at the New Orleans Film Festival last year. Right around that time they were searching for an [executive director] and a requirement was that you had to come to the Festival and apply in person. I thought it was a really interesting opportunity, and I’d always loved New Orleans. … So, I came to the Festival and interviewed for the job. I felt from the start like a really good fit.

How has your background prepared you for the position?

I worked in nonprofits even before I got into film, starting when I was in college. During graduate school, I was executive director of the Florida Scholastic Press Association, for which I planned a large statewide conference for around 1,000 high school journalists. Making movies is also like event planning, in a way. So there’s been a lot of crossover, which prepared me for the job.

You’ve attended film festivals as a judge and as a fan. How has this inspired you?

It is very interesting to go to film festivals now, not just as a filmmaker but as someone who is planning film festivals. As a filmmaker and as a general attendee, I have a sense of which festivals really get it right, which have room for improvement. I draw a lot on those experiences as we try to plan for an amazing festival this year. [For example,] True False Film Festival is a documentary only festival in Columbia Missouri. … There are live music performances [by “buskers”] before every movie showing. …We have a music strand this year called “Keeping Score.” It includes films about musicians, and we’re looking to have music performances before the showings. I also loved that the festival engaged the community. They sold out every screening of a documentary film. Similarly, at the Sidewalk Film Festival in Birmingham, it was amazing to see audiences of 1,500 people for an independent, somewhat obscure German film. Both festivals do a great job of building relationships with their audiences, so the audiences trust what they’re showing and go see it.

In addition to “Keeping Score,” what are some of this year’s Festival highlights?

“We have an exciting opening night lineup, including “The Artist,” a silent French film starring NOFS’s 2011 Celluloid Hero, John Goodman; “Brawler,” a local film starring New Orleans native Bryan Batt; and “The Big Fix,” Josh and Rebecca Tickell’s documentary exploring the root causes of the oil spill, which makes its North American premiere at NOFS. …We’re also excited to have the new Jonathan Demme film, [a documentary] called “I’m Carolyn Parker.” It’s about a woman in New Orleans, post Katrina, and Jonathan Demme is scheduled to attend the Festival for the screening. We’re showing a new film called “Live at Preservation Hall: Louisiana Fairytale,” about the collaboration between the band My Morning Jacket and Preservation Hall. There was a small screening in New Orleans but this will be the [first big one], and we’re working on bringing the director down. We received funding from Harrah’s, which is really involved in the LGBT community right now. Through the funding, we’re doing a program called OutTAKES, which includes LGBT films that are sponsored by Harrah’s, and we’re going to show most of them at Harrah’s.

The local film industry is growing enormously. How has the Festival, and NOFS, responded to that?

We really try to encourage an indigenous filmmaking culture. This year, we’ve tripled the number of Louisiana shorts that we show. Film production here is phenomenal right now, and my goal is to grow the film festival in the same vein as the film industry and to bring people from all over the world to see what’s happening in New Orleans. There are exciting things happening in film in the next five years in the city, and I want us to be at the forefront and be part of it every step of the way.

To learn more about NOFS and NOFF and to obtain membership and ticket information, visit the website neworleansfilmsociety.org.