Multitalented performer Nicki Richards tours the world, but the city that has her heart is New Orleans 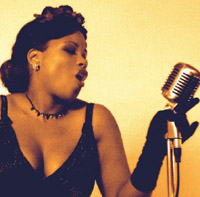 Singer-songwriter-musician Nicki Richards is a shining example of an artist who carries New Orleans inside her every day of her life. A multitalented performer with a warm disposition and an infectious laugh, Richards has landed roles in movies, television commercials and theater and was a grand prize winner on Star Search, but music has always been her first love. Richards is lucky to work with some of the biggest names in the biz, and her God-given and well-honed vocal skills secure her the most desirable musical gigs on the planet. Her résumé includes recordings and performances with Madonna, Mariah Carey, Mick Jagger, Tina Turner, Lenny Kravitz, Bette Midler, Gloria Estefan, Linda Ronstadt, Celine Dion, Mary J. Blige, Missy Elliot, the Reverend Al Green, Michael Jackson, Whitney Houston and more!

Richards was born in Honolulu and, as a Navy brat, later moved to San Diego. She spent her childhood summers in New Orleans visiting her beloved grandparents and other extended family members, making lifetime memories that she cherishes to this day. When she’s not touring the world as a backup singer for big acts, she lives in New York City, working on writing and recording vibrant music for her next project. And like many who are passionate for this intriguing, crazy city, no matter where Richards is in the world, you can be sure the gifted chanteuse is holding New Orleans and her strong family ties near and dear to her heart, like always.

Hi, Nicki! You have one of the loveliest voices on the planet. I bet you came out of the womb singing!

Oh, yes, thank you! [Laughs] Music has always been in my life. My maternal grandmother is the music director and pianist for about five churches in Pensacola, Florida. My mom’s a singer, and my brother sings as well; he’s a rock and roller. On my dad’s side of the family, I’m related to Clifton Chenier, the King of Zydeco, and his son C.J. Chenier, who took on his dad’s legacy after he passed away. They’re New Orleans folks.

You’ve recorded and performed with some of the biggest names in the music business.

Goodness gracious! I know! I wake up some days and I just can’t believe it! I tickle myself with that, I feel so blessed and lucky. I started with Madonna on the Confessions Tour. She’s one of the most amazing people I have ever met. I completely admire her. I learned so much from her every day I worked with her. She’s brilliant; she’s intense. I’ve never worked so hard in my life. The two people I’ve worked the hardest for, because it was so physically demanding, were Madonna and Tina Turner.

Those concerts must be so highenergy and involve so much constant moving. You must be busted at the end of a show! How long do you sleep afterward?

Oh, no, you don’t sleep, you just have to calm down! [Laughs] I call it “the crash” because you just can’t match those kinds of highs in real life. It’s magical. It doesn’t even feel real. You have to remind yourself you’re really there. And if you can get into the moment, there’s nothing like it! This summer, I did three weeks with Tina. She’s pretty much retired, but she does benefits and things she wants to give her energy to. Let me tell you, she’s as amazing now as she was when she was 20! And she’s constantly working at level 10, never level two. From sunup to sundown, she goes full out. I’ve never seen anything like it.

What were your first impressions of Madonna?

What I loved was that she was respectful, to the point and all about the music, and that was key for me to want to be there. I only work with people who I feel respect from. So that was good, I’m happy to report! She got down to business and that was great.

You took part in Live Earth, the Concerts for a Climate in Crisis, this past July with Madonna.

It was completely and absolutely amazing! You look out to the audience at Wembley Stadium and that’s a lot of people! It’s maybe 70,000 people, something crazy like that, all moving together! Just from working with Madonna, we got the “green” message pretty early. All of my lightbulbs have been switched out; I’m completely green at home. I turn everything off at night. Next I’ll be getting a hybrid and letting go of my car! [Laughs] I’m trying to be more environmentally responsible in my life.

And you’ve worked with Bette Midler …

Yes! I’m one of her Harlettes! I’ve worked with Mick Jagger on a couple of things; we did the Concert for New York City together. I worked with Mariah Carey for four years. I love her very much. I stopped working with her before she had a lot of changes in her life, but I had a great time working with her. I went on tours all over the world with her.

You’ve been spending summers in New Orleans your whole life?

Yes. I have much family in New Orleans, based in Algiers, like my uncle and his wife and all of my cousins. I also have family in Opelousas, and I’m itching to get back down there. My dad’s favorite story is when I was a kid, we’d go to my cousin’s in Opelousas and she’d make a fabulous dish that was full of okra and all kinds of things. And I exclaimed, “This is the best okra I’ve ever had, and I don’t even like okra!” [Laughs]

But back to New Orleans: I lost my grandmother a few years ago, when I was on tour with Mariah Carey. Thank goodness for Mariah, because she sent me back home, and I got through it some kind of way. And then Katrina happened and my grandfather, Papa Joe, ended up at the Dome. He was lost for almost two weeks. I think he just never snapped out of that trauma. He was in and out of hospitals, and I just recently lost him. He was so sweet and kind. He would always come and visit me whenever I’d work in the New Orleans area. Missy Elliot was probably one of the last artists I worked with down there. My grandfather would drive my cousins over and they’d visit me at the hotel, and we’d go drive around the French Quarter. Even before I’d go to Algiers to visit him, he’d just make sure to meet me no matter what my time frame was like. He was amazing. I was in New Orleans in September, and it was hard to redefine how I fit into it without that strong connection through my grandparents. I had to make peace post-Katrina. New York is where I live and I absolutely love it, but New Orleans is my home.

What have you always loved about New Orleans?

I love how diverse it is, the tenacity of the people, the accents. I love how I always feel like a kid when I’m there. I see it through my kid eyes growing up there in the summers; I see the huge fig tree, the pralines and everything that is sweet. The adult side of me likes to party, and in New Orleans there’s always a party! You have to hang out at Tipitina’s and in the Garden District. And the music! I love all the bands—Dumpstaphunk, the Meters, New Birth, all of it! And I just can’t get past the food! The most recent restaurant I enjoyed was the Court of Two Sisters. And Café du Monde! I like little restaurants that visitors don’t know about. Upscale, hole-in-the-wall, it doesn’t matter, because anyplace will be an adventure.

In addition to restaurants, you have relatives in New Orleans, so you get home-cooked stuff too.

That’s the beauty of it! And the traditions have been passed on to me. I make the same gumbo my grandmother made. Oh, it’s so good! I make it for the holidays. It’s legendary! My grandmother used to say, “Oh, it’s so good you don’t need no filé!” [Laughs]

You wrote and co-produced your first album, “Naked to the World,” for Atlantic Records a few years ago.

Yes. I was signed by Ahmet Ertegun, which is just intense! He sat me down at a luncheon and he’s like, “Okay, I signed Led Zeppelin, I signed Aretha Franklin and now I’m signing you. So that should tell you something!” I couldn’t speak or breathe for the next year! [Laughs]

You are working on writing and recording more of your own music currently.

Yes, I’m working on a new project. I try to do that every day and stay balanced. I have millions of songs I’m writing. I demo in my home studio, and then I start booking studio time. It’s a whole new world with music. Thank goodness for MySpace too, because I can post songs and get immediate feedback from people.

Will the album focus on a certain type of musical direction, or will you dip into all sorts of genres?

It might wind up being whatever R&B is now, maybe with a funk tinge to it. But honestly, coming back from New Orleans, I feel I’ve got more of that type of flavor to work with. There’s a whole record underneath this record, and it has to do with the recent losses in my family. My goal is to have a strong album that touches all the bases. I want to make sure you can hear all of my roots in it and those distinctly Louisiana rhythms.

Personally, I don’t think Louisiana music gets its fair shake out there.

You’re exactly right. And it’s so infectious, so undeniable! It would be great for more people to discover all its vast styles. Recently I started experimenting with some second line stuff, trying to put a new spin to it and incorporating more of it into my music. My home studio is a laboratory right now; I play keyboards and I’m recording on a computer program. I’m a big nerd; I’ve been fascinated with computer programming since I was a kid. It always threatens my male producer friends. They’re like “WHAT? You know how to do this?” [Laughs] I’m like, “Yeah, I’m a girl and I can out-program you, it’s okay!”

What has you the most excited these days?

My music is starting to come together now, and that’s the biggest thing in my life. It’ll be a really great day when I can say I’ve got that batch of songs together for this project.

Nicki, it seems so obvious—you really enjoy life every day, don’t you?

Oh yes! I’m sitting in my studio, talking to you with a big chunky boxer head on my knee—I just adopted a boxer puppy from the rescue shelter— and I just couldn’t be happier! I am looking forward to the gigs I have in 2008, and hopefully in the spring I’ll be going back out with Madonna. I just never know from one day to the next what will happen. The phone rings and it might be, “Hi, can you go to Australia with Pink?” I’m just hoping the world will be patient with me while I work on my music. But next time, I’ll probably see you on the stage!