Elegant Windsor Court is polished and poised for the season 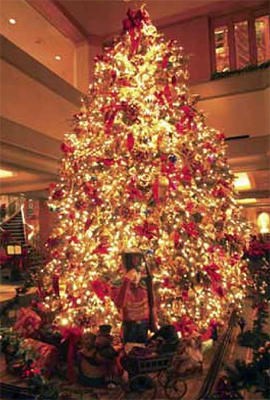 From the moment the doors opened in 1984, there was a sense of stately charm – an instant patina of style and taste mixed with a truly mind-boggling collection of extraordinary paintings, porcelains and antiques. The Windsor Court Hotel had all the hallmarks of a long-standing, English gentleman’s club in London.

The Windsor Court has been repeatedly voted somewhere between No. 1 and No. 10 of best hotels in North America. That it has continued to be awarded four and five stars over its 27 years is a testament to a remarkable standard of taste and service. Less than three decades is a short time to become a legend, but despite changes in ownership and horrors of hurricanes, the hotel has become a symbol of gracious hospitality.

It is such an integral part of the city, enjoyed as much by locals as visitors. Tea at the Windsor Court is as much a ritual as a Pimm’s Cup or champagne in the Polo Lounge. Between Thanksgiving and New Year’s, the hotel serves a selection of tea to more than 6,000. At five tea sandwiches per the kitchen’s staff prepares some 30,000 combos of salmon, cucumber, egg salad, and strawberry and cream – not to mention pastries.

As with an elegant lady, the occasional refreshing and updating is needed. The trick is that it must be handled in ways so subtle as to make change, like a good Botox job, imperceivable. When it comes to a property with the reputation of the Windsor Court, change must be so very slight as to feel a graceful continuity.

The hotel has embarked on an effort to integrate Wi-Fi and flat-screen televisions in its 316 rooms. It has taken time and an enormous effort and attention to detail that the hotel’s present owners demand. It’s been an evolution not a revolution, beginning with the refurbishing of the exclusive, spacious Club Lounge to the recent unveiling of changes to furniture in the Polo Lounge and the update of staff uniforms. The hotel has a spiffy but ever so proper air.

Rooms are infused with a sense of calm by a palette of soft blue and taupe colors. Pelmets and drapes feature an elegantly embroidered magnolia print on linen. Benches at the foot of king- and queen-sized beds are upholstered with the now classic New Orleans toile created by Hazelnut on Magazine Street. Walls are accented with subtle art indicating “a certain age,” a cameo floats in a shadowbox; old prints of Mississippi River traffic have been mounted in groupings; and a silhouette print of a very upstanding gentleman seems a sly salute to James Coleman, whose family created the hotel. Beds are luxuriously covered with Frette linens; bathrooms updated with new fixtures and configurations of showers, tubs and combinations; and toiletries are fittingly from Molton Brown of England. The former small kitchenettes have been converted to handsome butler’s pantries with food and drink to augment the hotel’s 24-hour room service.

New chandeliers mix with classic sconces. Much of the furniture originally made expressly for the hotel remains but glows from coats of French polish. The grand consoles in the halls, the imperial-size Chinese export planters, lamps and bowls and all that grace the hotel’s many breakfronts stand like sentinels to welcome visitors old and new. The signature bower of roses that has graced the hotel’s lobby for years remains.

Soon, decorations of the season will appear. Suddenly being transported to “Merrie Ol’ England” is as easy as pulling into the courtyard driveway at 300 Gravier St. (Should you crave a dash of New York, the W Hotel with its sleek, snazzy bars and hip places to perch is next door. It’s nice to have two totally different options back to back.).

Still, at the holidays, there is little to compare to the dignified but delightful sense of Old World charm, oft served with the tinkling of a piano and a touch of jazz, at the Windsor Court. She is a classic hotel … classy and just a bit insouciant; grand but not the least bit graying. In fact, she never looked better.