The Saints changed tactics to salvage the season 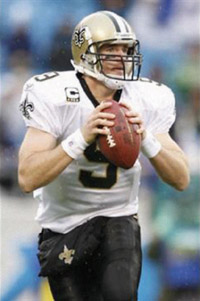 David Patten and a fleet of new air targets for Drew Brees have led the Saints to a remarkable season comeback. And there’s nothing like a comeback to make fans excited. In 40 years, the Saints have had a lot of second chances but they’ve never been so thrilling to watch as this year.

The preseason goal was primarily to reach the playoffs and then the Super Bowl. At that time, the first goal seemed likely, the second very possible. But then the Saints started 0–4, capped with a mind-blowing loss to the quarterback-decimated Carolina Panthers in which the offense, defense and special teams squandered every opportunity. (One of the most remarkable stats from that game was that the Saints held the ball for 43 plays on two drives and came away with just three points.) The reality started to set in: Only one NFL team had ever started 0–4 and reached the playoffs (the 1992 San Diego Chargers); the Saints themselves have had several 0–4 starts in their franchise history yet had never finished those seasons better than 7–9. And then something miraculous happened. The Saints became just the fourth team in NFL history to win four consecutive games after losing four straight. With a promising schedule and weak competition, this is the Saints’ chance to change history.

The key to the resurgence has undoubtedly been the air attack led by diehard Drew Brees. After having a total of one touchdown and nine interceptions in the first four games, he has rebounded with 11 touchdowns and one interception in the last four. However, the turnaround has come from an unexpected source. Throughout the first four games, last year’s rookie-of-theyear contender, Marques Colston, was constantly challenged for the ball and couldn’t seem to get open. And after Deuce McAllister, the main cog in the running game, went down, the team was left with few inside running options as Reggie Bush appeared unsuited to penetrating the defensive lines that were being increasingly stacked against his slashing sideline-to-sideline running style. Sean Payton knows that in the NFL to win means to change. With that in mind, he explored the Saints’ wealth of talent and uncovered a gem in David Patten.

It was well-known before the season that the Saints would seek out a veteran wide receiver to keep its well-oiled offensive machinery moving rapidly. The departure of Joe Horn and the sometimes uneven play of Devery Henderson and Terrance Copper meant that the team would likely draft a receiver or acquire one via free agency, and indeed they did both. The most anticipated addition had to be Robert Meachem, the SEC star with all the right physical attributes and amazing open field moves; yet it soon became clear that, due to minor injuries and the steep learning curve associated with the offensive scheme, his development would be a prolonged one. Fans and observers alike clamored for a free agent who would assert himself as a possible star in Payton’s souped-up offensive juggernaut, and many opined their disappointment when the team brought in David Patten, a longtime vet who appeared to have reached the end of his 10-year NFL string at Washington.

One of several pricey well-known free-agent receivers tempted to join the Redskins by its owner, Dan Snyder, Patten became part of a receiver graveyard while playing for Hall of Fame coach Joe Gibbs’ outmoded offense. There, Patten caught a grand total of 23 balls in two seasons, including just one in the season prior to that. But the coaching brain trust on the Saints staff must have recalled Patten’s prior years with the New England Patriots where he was known as a fast, reliable, useful team leader and playmaker. Patten had flown under the radar in New England while playing for Bill Belichick, who is known for spreading the ball around to multiple receivers, never tallying more than 800 yards receiving in a season, never becoming what could be called a “star.” Yet he was very productive there and was a key player in that franchise’s ascendancy during the early part of the decade. As an example of Patten’s abilities, he was the only player in NFL history to ever record a touchdown throwing, running, receiving and returning in a single game.

While the Saints looked at their 0–4 start and saw a failed season looming as a real possibility, Payton switched up the offense’s usual tendencies. In the fifth game, against Seattle, Payton inserted Patten into the offense in place of Henderson, and Brees looked to him multiple times as they produced 113 yards together. In the four games since that dramatically awful four-game start, Patten has caught 19 passes for 332 yards and one touchdown. Opening up that facet of the passing game has led to increased production for Colston and Bush, and the team in general has returned to its winning ways. Payton has compensated for the loss of McAllister by restoring offensive balance by using surefire quick passes that as a practical matter mirror the effectiveness of a running game. Though technically the team has turned to a primarily pass-oriented concept, with great success they are keeping defenses off-kilter and maintaining its time of possession advantage as well as ever. It is now entirely logical to expect another division crown and a second run at the conference championship game.

118
previous Eulogy for a Saint
next On the Ball