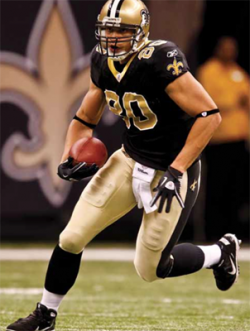 Jimmy Graham is rampaging. Saints fans may not be aware of it, but they are witnessing what may turn out to be the greatest single season by any tight end in the history of the NFL. In this season’s first six games, Graham has compiled 39 catches on 59 targets for 620 yards, an average of nearly 16 yards per catch, and three touchdowns. Not only was his yardage total over 200 yards more than the nearest player at his position, it was good enough for third best of any receiver at any position (wide receiver, running back or tight end). Graham, by the sixth game, had already had an astounding four straight games of more than 100 yards receiving, while Antonio Gates, the premier receiving tight end of the last several years, has had at most four non-consecutive hundred-yard games in any given season. His predecessor as the league’s leading tight end, Tony Gonzalez, never had more than six.

Graham is on pace for season totals of more than 100 receptions, over 1,600 yards and at least 10 touchdowns – the kind of season that megawatt Hall of Fame quality receivers like Marvin Harrison, Randy Moss and Jerry Rice used to enjoy. In fact, such numbers would rank Graham not only as having had the greatest season ever by a tight end, they would put him in the top 10 best seasons by any receiver of any kind ever. Needless to say, the single game and lifetime records of the Saints’ best tight ends, Henry Childs and Hoby Brenner, are likely not far away from being breached as well.

To see Graham at work is to immediately understand why this is happening – defenses cannot cover him. Often spreading out wide where few tight ends ever dare to seriously go, at 6-foot-6 and 260 pounds Graham features elite speed, a wiry-tough build and an impossible height advantage. Linemen dare not cover him, he outruns linebackers in embarrassing fashion and he outreaches almost every cornerback and safety. The only defensive option left is double coverage and even that does not work. Graham does not fear catching over the middle. Instead it is he whose streaking frame gives pause to those who are usually the intimidators, the crossing corners and free safeties of the league.

Watching Graham split the middle of a defense for one of his now patented long gains is like watching an 18-wheeler after its breaks have gone out on a steep Colorado highway – those in its path have two choices: either get out the way or get run over. Graham has leapt over cornerbacks, he has run over linebackers, he has run past and around safeties. Graham has run slant-and-go patterns usually taken by flankers, fly patterns usually dedicated to split ends, screens usually reserved for running backs and seam routes usually the sole reserve of slot receivers. Quarterback Drew Brees has targeted Graham more in the first six games of this season than he has ever targeted any other Saints receiver in a similar stretch. By game six, Graham had the third most targets of any receiver of any kind, including Calvin Johnson. In fact, Graham is as close as any single player today, of any kind, to being fairly termed “unstoppable” and the comparisons are few without getting into some pretty select names from the past. And in terms of style, those names are most likely retired Hall of Fame running backs.

It’s an open question when fans will make the transition from considering Graham just one of their many Saints favorites to realizing they are watching something very special. Fans went through that process with Brees, who at first appeared to be merely yet another Saints quarterback project in yet another rebuilding year but who at some point was challenging or breaking major NFL records while becoming the major component in a team that would eventually show legitimate championship aspirations. Graham has already supplanted Marques Colston as the Saints’ primary receiver, but what’s more, he has become a first look option on third-and-short, third-and-long and all goal-line and red zone plays.

However, though Brees and Head Coach Sean Payton have never been accused of becoming predictable or over-focusing on any one receiver, it is entirely possible that is happening. While the run game continues to slip – despite the presence of Mark Ingram, not to mention a healthy Pierre Thomas and the dynamic Darren Sproles – the Saints’ commitment to Graham does not wane, and it appears they are veering miles away from the offensive philosophy that won them a title. In other words, is it possible this offensive wunderkind, while a blessing, could almost be a curse as well? Much like the Saints’ 2008 season, when Payton’s pass-happy play calling drove Brees closer to shattering Dan Marino’s passing yardage while sacrificing the run game, this year will be worth watching. Will Payton fall under the spell of watching Graham accumulate stat upon stat, instead of disciplining himself and his team to a more even run-pass split and an unpredictable distribution of targets?

On a more personal level, in Graham – who learned to play major organized football in just the last four years – New Orleans has found yet another kindred spirit. After having been abandoned at a young age and subject to a now well-documented, troubled upbringing rife with harrowing challenges, Graham has discovered a new kind of family among Saints fans, who take to their heroes like no other. Having already embraced Graham, it will further be the great fortune of locals to see the unfolding of what may ultimately be an NFL legend. But it will be their duty to appreciate and applaud Graham when demonstrating for all the world to see the toughness, determination and indefatigable qualities they themselves have so well exhibited in these last several years.

377
previous Carving Out a Legacy
next The Science of Punting