The odds were against Irma Thomas, but she made it—big time 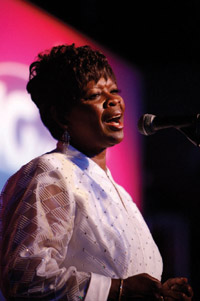 The smell of gumbo greeted me as Irma Thomas welcomed me into her New Orleans East home. Irma and her husband, Emile, were spending a leisurely afternoon cooking and enjoying their newly renovated house in the heart of the devastated neighborhood. There was no doubt in my mind that Irma was happy to be home. During the tumultuous days after Hurricane Katrina, a terrible rumor bounced around the country that Irma was missing. What we didn’t know was that she had been at a gig in Austin during Katrina. It wasn’t until she made it to Baton Rouge that she heard about the rumor. She called in to WWL-TV and told Sally Ann Roberts, “I am okay.” We all breathed a collective sigh of relief—our Irma was fine.

She may be considered the “Queen of Soul” now, but it was a long, hard road getting there. She had a baby at 14, became a singing waitress at 16, and at 19 had a hit with “You Can Have My Husband, But Please Don’t Mess With My Man.” She quit show business at 29 and moved to Los Angeles, but made a comeback in the late 1970s. In 2007, after countless hits, she finally won a much-deserved Grammy for Best Contemporary Blues Album, titled “After the Rain.”

To describe Irma as down-to-earth is to minimize how charming and disarming she is to strangers and family alike. After picking up her grandson from school, we sat in her comfortable living room, the gold Grammy glistening on the mantel. She offered me iced green tea, sat next to me and began to reveal some of the most intimate stories of her life.

You pick up your grandchild from school every day?
Every day when I am in town and I am not working. I am just one of many grandmomma’s that pick up their grandbabies in the evening. It’s just a normal thing.

So your life is very normal … cooking gumbo, picking up your grandson; were you like this throughout your career?
All my life, what’s the reason to change?

Well, when you are a star …
That’s what I do for a living; it’s a job. I just happen to enjoy what I do. It is a job just like what you do.

How do you balance it?
I just do it. I don’t think about it.

Tell me about growing up.
I grew up in New Orleans. My mother hatched me in Ponchatoula. Back then midwives were the norm. I was born in a house by a midwife. I have no clue as to how much I weighed at birth. My birth certificate only says that I was born on February 18 at 11:30, but it doesn’t say a.m. or p.m. That’s the mystery … but I was born.

Then you moved to New Orleans.
My mother was probably a gypsy. When she left Ponchatoula, she lived in Amite for a brief while then she moved to New Orleans. One of the places that I remember her living, and I must have been a wee baby because I remember it like a dream, was what they would call a rooming house or flats and they had these big old barrels that were made out of wood containers and they caught the rainwater. This was in the area off of Simon Bolivar Avenue, where the projects are now. Then she moved to Thalia Street in a hotel called the Vogue Hotel, where we lived in the back. It just had a stove and a bed. That’s the kind of environment I grew up in until I was around 5. My dad then took me to the country to live with his mama and she died. So I grew up for about four years between Greensburg and Hammond, and then we moved to Felicity Street when I was around 9 years old.

In Central City?
Yes, that was when Dryades Street was a vibrant shopping area. That was one of my favorite places to be. There was a place on the corner of Felicity and Dryades called the Joan Kitty Shop. There was an H&L Green, Handelman’s and they had a Kaufmann department store; in the back of Kaufmann there was an A&P store. From A&P, you could walk into Kaufmann and shop; we used to take that as the shortcut home.

It was an integrated shopping area because most of the folks who lived in that area didn’t own cars, so they would walk or catch the bus. It was the other Canal Street. When I left New Orleans in January 1970, Dryades Street was still a viable shopping area.

What happened to the neighborhood?
The highway changed the geography of the neighborhood, there were houses that were built up high and underneath the houses people washed their clothes. You could hang your clothes underneath when it was raining, and if it didn’t rain, then you could hang it out in the sunshine. That’s the kind of childhood I had, very interesting.

Were you singing at this point or feeling like you could sing or wanting to sing?
My vocal ability was discovered by my sixth grade teacher—Ms. Glapion. She is deceased now. I sang at her services. She took me to the Carver Theatre for a talent show where I came in third place. That was the era when theaters were multipurpose. Some Saturdays and Sundays, we would walk to the Ritz theater for the matinee where for 50 cents I remember seeing the Coasters, plus they had a lady who danced with snakes, and comedians, all for 50 cents.

Did you have an organized group back then?
No, but we would gather on the school playground and sing whatever songs were popular at that time. When I was in the sixth grade, Shirley and Lee had “I’m Going Out.” That was the big record on the radio and those of us who thought we could sing would be in the yard doing Shirley and Lee. It was brought to my attention that I had “something” a little better than normal. Even then I did not pay too much attention to it. I was always chosen to sing in school productions as first lead or second lead. It wasn’t until then that I realized that I had a voice of some kind. When I was going to school in the country, Ms. Clovis Hurst—I will never forget this lady— she put me in a play and I sang the Tennessee Waltz. I never had stage fear, because I’d been doing it all my life. I sang in school; I sang in church. I didn’t have fear of standing in front of a crowd. For me being an only child, I was getting all of the attention.

It seems like there was a lot of talent in New Orleans back then.
New Orleans has always been a city that was overflowing with talent, some discovered, some undiscovered; that’s why the city has this lax attitude about it because there has always been a flow of talent. It was nothing to see a band marching down the street for a social club or a church celebrating their anniversary with a parade. There was always music in the neighborhood, and the bars had live music in them. It was just a normal thing, part of the fabric of the city. You’d find some group on the corner doo-wopping. Kids grew up with that musical instinct. When I was singing as a kid, I didn’t think it was anything in particular; it was just something that we did, part of our everyday being. You don’t see a lot of that now because people do not sit on their porches and converse like they did when I was coming up.

So you had children early?
When I was 14, I got pregnant between my eighth and ninth year of school, and you could not go to school pregnant then. That was a no-no. If your parents could not afford to put you in a special school, then you were out of school. My dad did not want to have bastard grandchildren, so he made me get married. I got married down in St. Bernard Parish at a justice of the peace.

How was that time for you?
I was a young lady with a baby, staying with her parents because the marriage was not something where you could consider yourself husband and wife. It did not last; I was too young.

That must have been a challenge to get through.
It was life. They didn’t believe in telling you about sexuality. The basic learning tools were there; you went to Sunday school every Sunday. You were taught to say “yes ma’am,” “no ma’am.” Children respected people.

Did you have thoughts of singing at this time?
I just did it because I enjoyed it. I ended up losing my job over it.

Was that when you were a singing waitress?
Yes, after I lost my job as a waitress, Tommy Ridgley led me to show business. He set up an audition, but I did not show up. He came to my house, got me and took me down to Joe Ruffino’s office on Carondelet Street. I auditioned on a Monday, I was given a song—”Don’t Mess With My Man” by Dorothy LaBostrie—and three or four days later we were recording it. Next thing I knew, I had a record out.

Where did you hear it first?
My girlfriend heard it on the radio. It was burning up the airwaves. It was 1959–1960 and because of the lyrics—”you can have my husband, just don’t mess with my man”—they took it off the air, and it became more popular because it was something that you could not hear on the radio, you had to buy the record. Things were a little bit more prudish then.

So that was your first hit?
Yes, my very first record was a hit, and I did not even realize how big of a record it was. It wasn’t until a few years ago that I learned it was on the Billboard charts. All I knew was that it was on the radio, and I was able to get work from that. After that I auditioned for the Minit label, where I recorded “Cry On” and “It’s Raining” and “Ruler of My Heart.”

You had a hit and you had your children. Did you become driven at this time?
I didn’t think of it in those terms. My motivation was to take care of my family. It was survival mode for me. I didn’t even have a dress to play a gig in, but I found a pink dress with embroidery from a small little store on Dryades Street—I’ll never forget that dress. I also played at the Blue Eagle with a group called Lord Lambert, and I got paid $50. You could make a lot of groceries with $10, so with $50 you could pay for all of the things that you needed to survive. I was not one to dwell on my challenges at that time. I always found the way to get my needs taken care of.

What would your advice be to some of these up-and-coming performers in show business?
Stay normal and be grounded. I don’t avoid people. I go to stores like everyone else. People walk up to me like they’ve known me all of their life. Those are my fans, why would I want to avoid them? Total strangers. We stand wherever and have conversations. Everyday someone will walk up to me and hug me. You have to be an optimist— I have always been optimistic.

215
previous Smooth Grooves
next Have a ball!