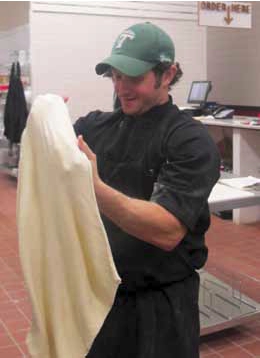 It’s a warm, blustery afternoon, and Aspen Nero is showing guests around a community garden in Mid-City. The quarter-acre site is filled with wooden planters, soft-turned dirt, and greens, some budding and others fully blossomed. Nero bends to finger a flowering cucumber plant, and Trey Stephens steps forward to get a closer look – as he should, since he works the front of the house at Pizzicare. That cucumber could end up on one of their pizzas.

Pizzicare (pronounced peet-zee-CAH-ray) is the newest creation of local restaurateurs Bart Bell and Jeff Baron, who first made their Mid-City mark with Huevos, the southwestern-style breakfast joint now operating as a Sunday pop-up sister restaurant, Crescent Pie and Sausage. The businesses share more than these passionate and committed owners: house made sausages and meatballs from Crescent Pie make it onto Pizzicare’s pies, while giant mixers in Pizzicare spin dough for yet another Bell-and-Baron venture, the Dough Bowl, a casual college favorite.

The restaurateurs have always sourced local produce, but for Pizzicare they didn’t have to look more than 50 feet, where NOLA Green Roots – which manages three community gardens – has its Mid-City lot. The pizzeria and garden are neighbors on upper Tulane Avenue (a new apartment building across the street, as well as the coming VA/LSU medical campus, will hurry along its coming revival). Whatever NOLA Green Roots delivers in its weekly baskets – basil, peppers, garlic – ends up in Pizzicare’s signature NOLA Roots Garden pie.

The week we went, Pizzicare was showcasing the garden’s mustard greens, arugula, and fiery little rings of jalapeño and cayenne peppers (used sparingly). The crust was slicked only with olive oil (infused with NOLA Green Roots’ tarragon) and layered simply with mozzarella and those brilliant, almost nutty greens. Using just-picked ingredients makes for a fresh, high-quality slice; so does the hand-tossed dough, which is mixed, pinched (Pizzicare’s translation from Italian) and twirled, several batches a day. The toppings may be local and hyper-seasonal, but the New York-style crust is just as appealing – chewy, subtly tangy dough with a flaky crisp bite.

The recipe is only half the secret; Pizzicare also invested in a double-decker oven that uses a circular burner (unlike conventional pizza ovens that only have burners in front and back). The stone-lined oven fast-bakes a pizza pie, between five and seven minutes, and does it evenly.

What’s next? Co-owner and chef Jeff Baron is experimenting with a corn masa crust and the base for salsa verde. Further down the line, “I’d like to open a thousand of these,” he says, “selling New York-style pizzas with local ingredients.” This would partner Pizzicare with nearby farmers and butchers (for meatballs and sausage) wherever the pizzeria is located.

Those local ingredients will change as the weather cools. Aspen Nero, director of operations for NOLA Green Roots, says they’ll be harvesting cabbage, cauliflower, broccoli, squash and kale in the months ahead. She and Trey Stephens pause at the community garden’s hen house. A poultry-topped pie, perhaps? The chicks back away from the fence. “Oh, no,” Nero rushes to say. “We only need them for their eggs.”

Pizzicare, 3001 Tulane Avenue, 504.301.4823. Besides its ever-changing NOLA Roots Garden pie, Pizzicare offers a variety of pizzas made to order, as well as calzones and strombolis. If you’re in a rush, check out the pre-cut pizza slices on display. Also be sure to try the zesty marinated salad, a colorful tumble of olives, carrots and sweet peppers, and tossed lightly in herbed olive oil (it reminded us of a muffuletta salad, especially with the salami strips on top).

NOLA Green Roots, 3101 Tulane Avenue, 504.251.9818. NOLA Green Roots manages gardens in Mid-City and in the Ninth Ward, where they teach locals how to grow fresh produce, They’re also opening a Kids Village on Tulane Avenue, where children from pre-school to fifth grade will learn how to garden, raise farm animals, and integrate science with the field. Want to help sponsor the village? Give them a call.