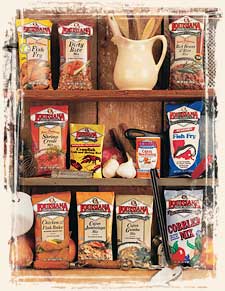 New Orleans is a city steeped in many traditions and topping that long list is the Cajun cooking that makes this city famous, from crawfish boil and jambalaya to fried oysters perched on top of crusty bread or served solo. The best part about food traditions here in New Orleans is that you can make them at home with the products from Louisiana Fish Fry. I have picked up numerous yellow bags of Lemon Fish Fry and bottles of Seasoned Shrimp Boil but my favorite is the Seasoned Fish Fry.  I often wondered how this recipe originated and made its way to the food stores. Luckily, I had the opportunity to talk to Tyler Pizzolato, the grandson of company founder Tony Pizzolato, and learn about the amazing history behind that blue bag filled with amazing flavor.

In the early 1900’s, the Pizzolato family migrated to the Port of New Orleans from Sicily, walking three days along the levee to finally settle in Donaldsonville. In order to earn a living, they operated a roadside business, selling everything from fresh produce to Christmas trees.  Because of their dedication to quality and fair prices, the business grew by word of mouth and in 1959, Tony Pizzolato took it off-road and opened a small produce market in Baton Rouge. When he added fresh seafood to the mix, it outsold the produce so much that he needed an even bigger space to match the demand. So, in 1972, he, his wife, Mary Lee, and five children converted an abandoned gas station in Baton Rouge into a thriving fish market called Tony’s Seafood—the birthplace of the original fish fry batter. “Seafood started selling so well that he decided to bag his own breading. He had his own recipe that he put it into plastic bags, wrote on it that it was seasoned fish fry and he would just give it to customers,” said Tyler. “It got really popular…people kept coming back and asking for it. So they opened [the product business] in 1982. The first product was seasoned fish fry; that’s all they had and that’s all they sold. That’s why the name is Louisiana Fish Fry.”

Humble beginnings often launch successful business endeavors and Louisiana Fish Fry is no exception. Currently, the company offers close to fifty items, including a variety of sauces, batters and entrees, but the original fish fry batter is still its biggest seller. “In 2009, we sold around 7.7 million fish fry [products]; the blue bag sells close to 4 million bags a year and the yellow bag around 1.5 million,” said Tyler. All products are manufactured in an 80,000 square foot factory with close to 250 employees between it and the adjacent retail outlet.

The company also distributes their products in all 50 states and Pizzolato credits the name and its close-knit family origins. “It’s the flavorful food [of Louisiana], the Cajun flavor. I think Louisiana Fish Fry is a great name for us and it does help that we are from Louisiana and we’re family owned. It’s a big deal.” One surprising fact about the business is that its namesake state is not the biggest consumer of its products. “We started in Louisiana but the majority of our items get sold in Texas…it’s our largest market. In any of the big, major markets in Texas, we’re number one,” said Tyler, smiling.

An integral part of the success of the company is also due to its unique product development process. “When we want to come out with new items it has to do with our competitors,” explains Tyler. “We want to have a little bit of differentiation; a little more spicy because we are a Louisiana company.” The process starts with the plant manager developing the recipe for the new product and then it’s tested among an office staff that includes five Pizzolato family members. If it passes that taste test, the product moves onto the most hard-core critics of all: the customers at Tony’s Seafood. “Thousands of people eat fish there. Thousands of pounds of fish get sold there every day. So we go ahead and start selling at Tony’s and if people start taking a liking to it, we know. Any product that we come out with here, has been tested at Tony’s,” said Tyler. Also, the customer reaction is extensive and has a large input into the development. “It’s tested for three or four months before we launch it. If we get feedback that it’s too spicy or not spicy enough, we might tweak it a bit.”

Tyler, who is currently the marketing manager at Louisiana Fish Fry, is familiar with all the processes and parts of the family business. “I started working at Tony’s when I was 15, working behind the counter, selling seafood and in the deli, frying fish. I’ve done everything at Tony’s. I went to college for marketing…I wanted to find something I could do to help the company,” said Tyler. He also has some sound advice for young people who want to work in their family’s business and be successful. “The direction I would tell them to take is not to think you know it all. It’s the person that works hard, that is willing to do anything; I’d be willing to jump on a truck and go around town and help them unload. In a family business, if you want to be a part of it, you have to do more than one thing.”

Tyler’s experience has paid off with successful marketing campaigns with partners such as Miller Lite, Coca-Cola and Louana Oil as well as involvement with the Zephyrs, Hornets and the Saints. In addition to the company’s current product line, Tyler sees a bright future for Louisiana Fish Fry. “We’re in the works to come out with a beer batter to market to the North East and a Cajun Batter…it’s like the blue bag but it’s a little more spicy with a little more kick to it.” In addition to developing lower sodium products, he also sees a change in packaging. “We’re going towards where the industry is going…in the future, we’ll move to a box. “ From one product to an extensive line and now, from the bag to the box, grandfather Tony would be proud.