Cigarette smoking is the most important preventable cause of premature death in the United States. 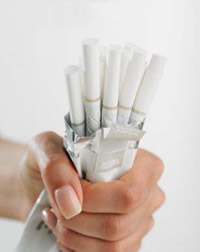 It accounts for nearly 440,000 of the more than 2.4 million annual deaths. Cigarette smokers have a higher risk of developing several chronic disorders. These include fatty buildups in arteries, several types of cancer and chronic obstructive pulmonary disease (lung problems). Atherosclerosis (buildup of fatty substances in the arteries) is a chief contributor to the high number of deaths from smoking. Many studies detail the evidence that cigarette smoking is a major cause of coronary heart disease, which leads to heart attack.

How does smoking affect coronary heart disease risk?
Cigarette and tobacco smoke, high blood cholesterol, high blood pressure, physical inactivity, obesity and diabetes are the six major independent risk factors for coronary heart disease that you can modify or control. Cigarette smoking is so widespread and significant as a risk factor that the Surgeon General has called it “the leading preventable cause of disease and deaths in the United States.”

Cigarette smoking is the most important risk factor for young men and women. It produces a greater relative risk in persons under age 50 than in those over 50.

What about cigar and pipe smoking?
People who smoke cigars or pipes seem to have a higher risk of death from coronary heart disease (and possibly stroke), but their risk isn’t as great as that of cigarette smokers. This is probably because they’re less likely to inhale the smoke. Currently there’s very little scientific information on cigar and pipe smoking and cardiovascular disease, especially among young men, who represent the vast majority of cigar users.

What about passive or secondhand smoke?
The link between secondhand smoke (also called environmental tobacco smoke) and disease is well known, and the connection to cardiovascular-related disability and death is also clear. About 37,000 to 40,000 people die from heart and blood vessel disease caused by other people’s smoke each year. Of these, about 35,000 nonsmokers die from coronary heart disease, which includes heart attack.

128
previous Nursed Back to Health
next The Bond of Love