Complementing Tradition at The Irish House 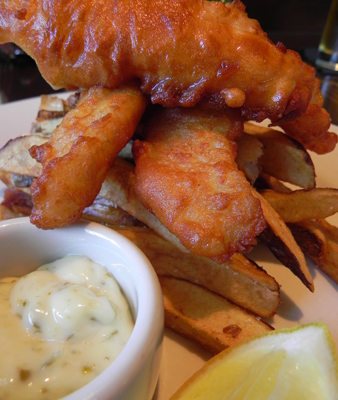 For over two centuries, the people of New Orleans have been celebrating St. Patrick. Since the first heavy influx of Irish immigrants landing here, in the nation’s leading port, during the early 19th century, their culture has become an indelible part of the unique amalgam that is the Crescent City.

Nowadays, every year for a week around March 17, the city comes alive and everyone is “wearin’ the green.” Bright floats pass out edible plunder, where you can catch more than enough carrots, potatoes and cabbage for a hearty stew while smartly dressed Irishmen in kilts and sharp jackets trade roses or beads for kisses from female parade-goers. There are parades everywhere, from the French Quarter to the burbs, but one of the biggest takes place in and around the Irish Channel, one of the many quintessential neighborhoods of the city.

Joining the fray this year will be one of the few Irish-centric restaurants in the city, The Irish House. On the corner of Melpomene Street and St. Charles Avenue, this pub/family-style restaurant founded by Dublin-native Matt Murphy will host a weeklong celebration in honor of St. Pat. Murphy recently left his namesake restaurant, M Bistro at the Ritz Carlton Hotel, to launch his Irish dream in August 2011. Acquiring a large building that once housed a Mexican-themed restaurant, Murphy has successfully altered both the environment and the menu to reflect the ambiance of an Irish pub.

Murphy has been immersed in Irish cooking since the age of 14, when he worked at his father’s pastry shop and grandfather’s restaurant in Dublin. After studying the culinary arts, working at Michelin-starred restaurants like The Tea Room and traveling to exotic, far-off places like Thailand and Hong Kong, Murphy made New Orleans his home. The Irish House is where he can showcase the cookery of his childhood in a traditional manner as well as creating a sort of rich, Irish-fusion cuisine featuring local ingredients. You can taste Murphy’s creativity in dishes like Gonsoulin Ranch Meatloaf over fried walnut bread with wild mushroom and foie gras butter or Jumbo Lump Crab & Heirloom Tomato Salad with pickled onions and okra and drizzled in cane vinegar and citrus oil.

Like any good tavern, The Irish House also features a large bar with many different beers, both in bottle and on tap, from brewers all over the world, from Belgium to Vermont. You can grab a stool at the bar and drink a pint or two while watching rugby tournaments that are aired on the flat-screen TVs and promoted heavily via a calendar on the The Irish House’s website (not to mention through Facebook and Twitter). You can also fill your belly right there at the bar, taking advantage of classic combinations like bubble & squeak, bangers & mash or fish & chips before you try hitting the hard stuff.

Murphy is excited for the local St. Patrick’s Day celebration and has planned a variety of festivities at The Irish House. A lover of Irish music, the chef was animated when discussing his plans to feature a different performer every day that week, including musicians like Aine O’Doherty from Donegal, Ireland and Beth Patterson from Lafayette, Louisiana. On Saturday, March 17, the restaurant will pull out all the stops and the entire parking lot will become a mini-festival of its own with food booths, beer stands and live music all day long. Murphy will be serving hearty Irish breakfasts in the restaurant all morning featuring rashers, Irish sausage, potato hash and black & white pudding. The chef also plans to feature dishes from different regions of Ireland like Leitrim, Wexford and Cork and he confided a secret wish to extend the party down an entire block of Melpomene from St. Charles to Prytania.

So raise your glass to The Irish House and offer a toast to New Orleans’ newest addition of Irish music, food and celebrations that promises to quickly become a local tradition.