Reeled in by Borgne Restaurant

Chef Brian Landry pays a culinary tribute to the Isleños 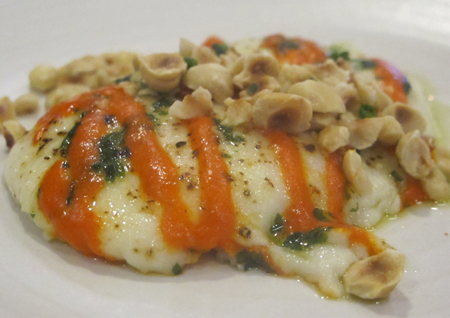 “This reminds me of a fishing camp,” my friend said, as I joined him for lunch at Borgne restaurant. He meant the stilted, open-decked camps that line inlets and canals all the way to the Gulf coast. This is where fishermen clean and sort their catches, and get in the shade with a beer.

Borgne, the latest restaurant from Chef John Besh, is washed in cool water tones, the same shimmering slate gray of the lake on an overcast day. Lightweight seating in the casual dining room recalls “deck furniture,” my friend noticed, while eye-catching pillars of oyster shells anchor the airy space. Another design element I loved: oyster-shucking stations gleamingly replicated in the restroom sinks.

The cuisine here is a tribute to the Isleños, immigrants from the Spanish-speaking Canary Islands, located off the coast of Morocco, who settled in St. Bernard parish. The menu is nearly all seafood and Executive Chef Brian Landry slyly works in references to his earlier tenure at grand dame Galatoire’s with my favorite dish at Borgne, the seductively simple “fish in a bag.” Inside the steaming paper wrap is flaky local sheepshead, drizzled with a roux made from crab fat, scraped out from behind the crab’s mouth.

I also loved the Caldo Nuñez, a nod both to the powerful Isleño surname and to the flavors of Spain. Spoon-tender shredded pork shares a light broth laced with allspice, saffron, garbanzo beans and hints of mint. It’s luscious without being too rich. Lighter eaters should try the salad made with Vietnamese herbs and lemongrass, paired with grilled rounds of chicken and named for Father Vien, the Catholic priest whose urban garden in New Orleans east is legendary. Borgne’s recurring theme of immigrants, and what they bring, makes this inclusion really spot on.

If you’re picturing oystermen hungry after a long, hot day’s work, then I see them diving into Borgne’s perfect fried catfish with tangy green tomato chow chow, and a cold beer selected from an impressive selection of canned brews and local drafts.

Most of the menu’s ingredients are local, but Chef Landry does import some items from the Canary Islands—namely, the goat cheese with surprising mozzarella-like texture that’s served with chopped hazelnuts and authentic Canary Island honey rum.

Save room for dessert: cinnamon–crunchy churros that I don’t believe you’ll find anywhere else in the city, hazelnut flan topped with cleverly conceived condensed milk sorbet and a spectacular, pudding-plump ginger ice cream, warmly spiced with real ginger. I’m also intrigued by the promise of turrón ice cream—as the daughter of a Basque; I grew up eating the honeyed, almond nougat.

And as someone who knows the immigrant’s story pretty well, you might say that Borgne has me hooked.

Courtesy of Brian Landry and Borgne

1 sweet potato and 1 yellow potato, each peeled and diced small

In a large sauce pot over moderate heat, cook onions, bell pepper, celery, carrot and garlic with just a splash of olive oil for several minutes, or until vegetables become slightly translucent. Add the pickled pork and chuck roast.

Pour in the chicken stock and season with bay leaves, paprika, cayenne pepper, all spice and saffron. Bring the broth to a boil before reducing heat to a gentle simmer. Add the mustard greens, cabbage, garbanzo beans, potatoes and tomatoes and simmer until tender. Season with salt and pepper. Garnish with fresh mint.